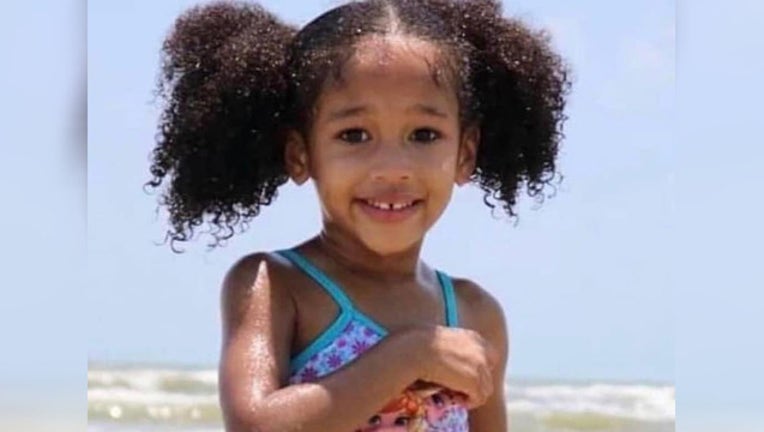 HOUSTON (FOX 26) - Maleah Davis, 4, was reported missing from Houston on May 4. On May 31, her remains were found on an Arkansas roadway.

Here is a timeline of events in the case.

Maleah Davis’ mother, Brittany Bowens, says she left Houston and flew to Massachusetts for her father's funeral. She would later claim that she had broken off her engagement to Derion Vence just before she left town.

Surveillance camera video captures Vence leaving his apartment holding a laundry basket that appears to have a black plastic bag inside. He was also said to have had two bottles of bleach.

Meantime, Bowens, who was waiting for Vence at the airport, resorted to calling another family member to pick her up.

Bowens calls police to report Vence and the kids missing.

Vence shows up to Houston Methodist Sugar Land Hospital with his one-year-old son at night seeking treatment for a head injury. Maleah is not with him.

Vence speaks to police. He claims to have been attacked the night before on his way to pick up Maleah’s mother from George Bush Intercontinental Airport. He tells police that Maleah and his infant son were in the car with him, when he pulled over to check his tire around Greens Road and Highway 59. Vence then claimed that three Hispanic men pulled up in a blue Chevy pickup truck and beat him up until he passed out. He says the next day, May 4, he regained consciousness near First Colony Mall. Maleah and his car were nowhere to be found, but his son was still with him.

An Amber Alert is issued for Maleah.

Texas EquuSearch begins looking for Maleah. They search the area in northeast Houston where Vence says they were abducted.

Texas EquuSearch moves the search efforts to southwest Houston, setting up a command post near the apartment where Maleah lived.

A Houston police detective tells FOX 26 that Derion Vence is a person of interest in the disappearance of Maleah.

The rain from the day before leaves the search area flooded. Texas EquuSearch suspends ground search until the flooding recedes. They search by air instead.

Police release more photos of the silver Nissan Altima that Vence said he was driving when the alleged abduction occurred.

The silver Nissan Altima is located in the parking lot of a Missouri City shopping center. Police say all of the car’s tires appear to be fine.

Vence is arrested and charged with tampering with evidence, a human corpse. His bail is set at $999,999,999.

Prosecutors say dogs picked up the scent of a human cadaver in the trunk of the Nissan. They say a laundry basket and a gas can are also found in the trunk.

A community rally is held on Mother's Day. More than a hundred people unite in solidarity at the parking lot across from Maleah’s home to preach their sympathy and the pain they feel as mothers.

Vence is set to appear in court, but the hearing is rescheduled.

Brittany and Quanell X leave court and wait for elevator as crowd chants “Justice for Maleah.”

A vigil and balloon release are held at Oyster Creek Park in Sugar Land in honor of Maleah.

A reward of up to $5,000 offered for information in Maleah's disappearance.

Brittany Bowens sits down with FOX 26 to share her side.

As the search for her daughter continues, Maleah's mom was back on social media and getting a lot of backlash for her posts about Derion Vence, the suspect in her daughter's disappearance.

Houston Police Department gives a press conference to update the public on progress in the case. According to HPD, those close to the case have not been cooperating.

Maleah Davis' grandmother asks Chief Art Acevedo to announce that Ronnie and Karen Bias of Lake Charles, Louisiana have pledged an additional $15,000 for a total of $20,000 for information leading to an arrest and prosecution.

Quanell X will no longer be representing Brittany Bowens. The activist tells FOX 26 he was the one to walk away, but Bowens says otherwise.

A motion filed by Derion Vence's attorney to withdraw as council is granted. A judge appoints a new attorney.

Crime Stoppers of Houston has increased the reward of up to $12,500 in Maleah Davis' case. In addition to private contributions, this brings the total reward to $27,500 for information about Maleah's whereabouts.

Quanell X says Derion Vence confessed that Maleah Davis is dead. He says Vence told him that Maleah's death was an accident and that he admitted to dumping Maleah's body in a ditch in Arkansas.

Arkansas State Police, local law enforcement and the FBI are searching for her remains in Arkansas. Texas EquuSearch and Houston police will also to Arkansas to search.

In Arkansas, the Hempstead County Sheriff says a litter and mowing crew that was mowing the interstates and the exits found a black garbage bag "emitting a foul odor." Authorities say the bag is believed to contain human remains.

The Arkansas crime scene is processed.

The remains believed to possibly belong to Maleah arrive in Houston overnight for testing.

A vigil is held outside of the apartment in southwest Houston where the 4-year-old girl lived. It draws people from all over the Houston area who have been touched by Maleah's story.

The Harris County Institute of Forensic Sciences positively identifies the remains found in Arkansas as those of Maleah Davis. The cause and manner of her death are pending.