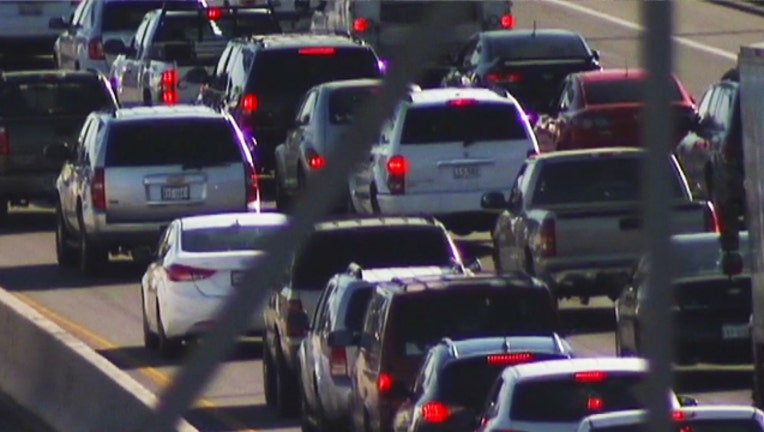 HOUSTON - As more people hit the roads heading back to work and children going back to school, despite another wave of the pandemic, aggressive driving incidents are on the rise across the country.

Just this summer, a man in Chicago attacked an off-duty officer and bit his friend's nipple off and a man in Washington state was caught on camera hurling an axe at another driver.

In the greater Houston area, road rage is nothing new for drivers. Back in 2014, Houston took over New York as the road rage capital of the U.S., according to AutoVantage’s annual "Driver’s Seat Road Rage Survey."

But last year, during the first wave of the pandemic when fewer cars were on the road, there was an increase in road rage incidents from the year before.

Texas Governor Greg Abbott even deployed Texas Department of Public Safety troopers to the Houston area to help crackdown on aggressive driving and the Houston Police Department threatened to take away vehicles from those suspected of road rage.

And as we head into the latter half of 2021, things don't seem to be improving.

This past weekend alone, there were two possible road rage incidents involving children.

On Saturday, a 29-year-old father was shot and killed along East Freeway. Police say the father’s two young children, six and eight-years-old, were able to safely steer the vehicle into a parking lot.

The next day, a nine-year-old girl and a six-month-old boy were rushed to a hospital after getting hit by a bullet or shrapnel in a shooting on the North Loop.

Both shootings took place during the same weekend in Harris County. One of those shootings killed a man. FOX 26 Reporter Matt Seedorff spoke with a father whose children were injured in one of these shootings.

ROAD RAGE BY THE NUMBERS

He says road rage is often put into the Aggravated Assault category so this isn’t necessarily completely accurate, but the numbers do show a trend that's slightly higher than that of last year.

Crashes with road rage as a contributing factor are also tracking higher this year than last in Texas, Harris County, and the City of Houston, according to TxDOT data gathered by FOX 26.

TxDOT: Houston roads, highways and streets are not as safe as they used to be because of aggressive drivers

If driving in Houston lately seems more dangerous than usual, you're not the only one who's noticed.

Since June 20, FOX 26 has reported on at least half a dozen shootings related to road rage in the greater Houston area.

Most of the reported incidents ended with injuries, but two resulted in death. Only one of the shootings did not result in any injuries.

"The road rage … I do want to say: People need to settle down," Mayor Turner said.

The day after a teen was shot in a road rage incident following a Houston Astros game, Mayor Sylvester Turner addressed aggressive driving in the city during a city council meeting.

"We're just gonna have to find ways … May have to put more eyes on the streets and the roads."

The next day, Houston Police Department launched a new program to combat the growing problem.

On July 11, HPD announced the Safe Roadways Initiative, which is a multi-divisional multi-agency initiative, targeting road rage incidents in the greater Houston area.

"It has become such a problem of late," said Houston Police Executive Assistant Chief Larry Satterwhite during the announcement. "Just in just this year alone, we've had over 1,500 calls for service."

"I truly believe the best way to to attack that, given our limited resources is to collaborate with everybody," Satterwhite said. "Thankfully, our mayor and our city council have provided a lot of funds in terms of overtime dollars. And we've been able to increase a lot of our enforcement out on our roadways and into our highly impacted neighborhoods because we're looking at violent crime in general around the city."

Using funds Law enforcement officers are working in marked and unmarked cars on freeways during peak times, when most incidents tend to occur.

They're proactively looking for the following aggressive behaviors:

HOW EFFECTIVE IS SAFE ROADWAYS INITIATIVE?

On August 6, HPD tweeted impressive numbers of the work from the Safe Roadways Initiative.

One victim tells FOX 26 he's still waiting for justice after he was shot while driving along the South Loop near Cullen in early August.

"I got three plates in my jaw, where they rebuilt it after the bullet hit," said Trey Crank, a father of two.

He was shot in the face and transported to a hospital in critical condition.

According to Crank, no arrests have been made. He isn’t sure why someone shot at his car.

While Clark is still waiting for answers, the Safe Roadways Initiative has answered the call to action in the last two months with follow-through in some investigations of the extreme cases.

One example comes from an incident on the Katy Freeway, where images were captured of a passenger in a black Chevy Silverado pointed a gun at another vehicle while the truck's driver tried to run the victim off the roadway, according to police.

They pushed the image out on social media soliciting the public's help on July 14, and eight days later they found the suspect seen in the images.

But more notably, in the weeks following the deadly road rage shooting of 17-year-old David Castro, which caught national headlines, HPD worked diligently with partners and the public to find the suspect.

"I think in those extreme cases where they end up in some act of violence, our investigators are very good at going back and finding out what led up to that particular incident," HPD Commander Reece Hardy told FOX 26. "That's all part of this initiative is learning more about what leads up to these road rage incidents."

Within three days, they released a sketch and had a description of the vehicle that did not have a front license plate, but a paper plate in the back. Less than two weeks later, HPD released surveillance footage of the suspect’s vehicle with more solid descriptions. Ten days later on July 30, the suspect was identified as 34-year-old Gerald Williams. Williams then turned himself in three days later.

Mayor Turner released a statement in response to the arrest, saying, in part, "I thank Police Chief Finner, HPD investigators, and the community for the collaboration that led to the surrender and arrest of the suspect. The constant flow of eyewitness tips, information about the vehicle, and the suspect’s description kept this crime front and center for several weeks … This case is a tragic reminder that guns, road rage, and reckless behavior have deadly consequences."

The 100-plus tips from the public and the collaborative investigative work from Safe Roadways Initiative led to a suspected murderer, but how do we prevent more shootings?

It’s no doubt traffic is a nightmare for all with the amount of cars on Houston-area roadways. The problem is only being exacerbated year after year as the population increases.

More people means more vehicles hitting the roadways, and that’s clearly seen in Texas A&M Transportation Institute’s 2021 Urban Mobility Report. The report ranks the worst traffic in the country depending on how much time drivers spend in traffic. The Houston metropolitan area jumped from the ninth position to spot number three, despite the pandemic bringing down congestion everywhere.

RELATED: Houston area has 3 of 10 most deadly road segments in Texas: study

I-45 is deadliest highway in U.S., world

The country's most dangerous road is right here in Houston. I-45 is the deadliest highway in the entire U.S. even worldwide. Lt. Craig Cummings with the Texas Department of Public Safety

To tackle the widespread congestion, TxDOT has several Texas Clear Lanes projects in the works, including the highly-contested I-45 North expansion. But construction, as you’ve seen driving through Houston-area freeways, also adds to the bumper-to-bumper nightmare.

It’s not surprising that all of this traffic and backup leads to high-stress and tension.

According to research by the American Psychological Association, "environmental factors such as crowded roads can boost anger behind the wheel."

But if you tack on a pandemic and its collateral damage — including social isolation, economic struggles — personal frustrations grow even more. The APAs research shows that "displaced anger and high life stress" are also linked to road rage.

TxDOT says most aggressive drivers aren’t aggressive in everyday settings. They demonstrate this idea with an animated video of a guy turning into a maniac as soon as he gets behind the wheel. TxDOT tweeted it with a caption that says a driver can "somehow become a different person behind the wheel. "

"There's a lot of reasons for the stress, frustration, anger," said Lt. Satterwhite. "Because you feel like somebody cuts you off or something like that, that goes on the roadway. And then people carry it out in ways that are that are dangerous, actually, and create more problems for themselves and for other people."

According to HPD, their definition of road rage, which can be subjective since it isn’t codified by state law, is aggressive or violent behavior exhibited by drivers. Commander Hardy says it can be as simple as a "hand gesture or it could escalate all the way up to a firearm being displayed."

"We all feel our pulses get up sometimes when someone cuts us off in traffic or someone's tailgating too closely to us," Commander Hardy says. "We all feel threatened and there's this injustice that's being done to us right and so that's why we, that's why we get all upset."

But responding to the so-called injustice, could lead to a deadly situation that could have been avoided.

Overall, to avoid road rage it seems the onus falls on us as drivers to keep our cool, otherwise we could become potential victims of being rear-ended, run off the road or worse being shot.

"You have to take control of your emotions you have to take a deep breath and realize it's not worth it," Commander Hardy urges. "It's not your job to right this wrong right now on the roadway because you're not going to be able to; and no action that you take is going to make this situation better while you're behind the wheel of a car."

To educate drivers, TxDOT and the Safe Roadways Initiative are also providing safety tips to drivers.

HPD’s tips for avoiding actions that provoke other motorists:

"Eye contact is really important. Don’t make any eye contact. Look away. Keep your hands on the steering wheel, focus on the road," Danny Perez with TxDOT told FOX 26. "If the person is trying to engage you, don’t become an aggressive driver by trying to address an aggressive driver. That’s the best recommendation."

TxDOT also has its tips to avoid aggressive driving:

So stay calm and drive on.