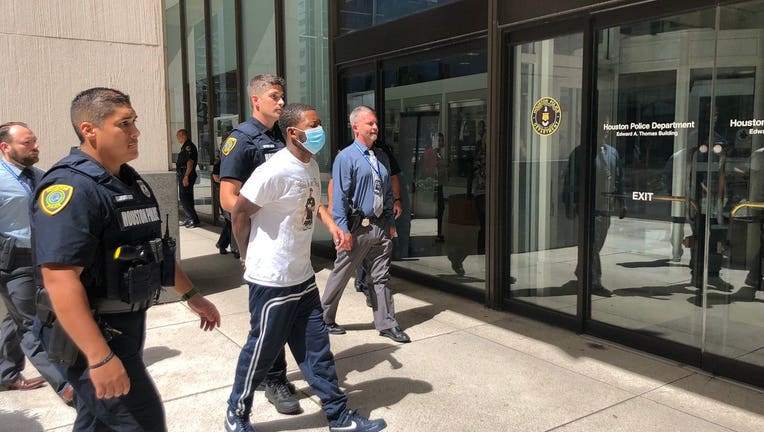 HOUSTON - Houston police say the suspect charged in a road rage shooting that left a teen dead turned himself in on Monday.

Gerald Wayne Williams, 34, is charged with murder for the July 6 shooting of 17-year-old David Castro, who was going home after a Houston Astros game with his family. Police identified Williams in a tweet Friday afternoon.

"Prayers were answered today," said David's father, Paul, after Williams turned himself in at HPD headquarters. "Our family has been praying for the safe arrest of the suspect. The fact that he safely surrendered and did not put any of the community members in jeopardy, none of the police department members in jeopardy, is an answered prayer."

Mr. Castro expressed gratitude to police for "working tirelessly to bring justice" for his son.

During the press conference, HPD Chief Troy Finner said, "We will not stand by and allow people to brutally murder and harm our citizens and do nothing about it. We're going to stand strong as a police department, our citizens, and every arm of this criminal justice system to get things under control."

Mr. Castro also thanked the community, as well as his friends and family, for their support.

Paul Castro, the father of the teen who was killed in the July 6 road rage shooting, addressed the public shortly after the suspect in his son's death turned himself in to authorities.

"Our family has been inundated with love and prayer and support. And I understand that there were a great number of tips that came in, that came in because you all were touched by this story and you could see your own children in my son. And so I thank you for doing that," Mr. Castro said.

He asked for continued prayers for his family.

"The only word that comes to mind is ‘unimaginable,’" Mr. Castro said. "There are no words in the English language, nor should there be, to describe the pain that we're going through right now."

Mayor Sylvester Turner released the following statement regarding the arrest in the case of Paul Castro's murder:

"I thank Police Chief Finner, HPD investigators, and the community for the collaboration that led to the surrender and arrest of the suspect. The constant flow of eyewitness tips, information about the vehicle, and the suspect’s description kept this crime front and center for several weeks.

"The arrest will not bring back 17-year-old David Castro, but I hope and pray that it brings comfort to his grieving family as they take a step toward justice and healing. This case is a tragic reminder that guns, road rage, and reckless behavior have deadly consequences.

"The shooting was senseless and indefensible, and we must work together to ensure that an incident like this never happens again in our City."

Police say the deadly shooting happened around 11 p.m. on July 6 near McCarty Street and East Freeway, though the incident began on Chartres Street.

17-year-old David was one of two passengers in a pickup truck driven by his father. According to officials, Mr. Castro was driving on Chartres Street when he and the driver of a white Buick exchanged gestures.

"Whatever offense he took to me or my vehicle, was murdering my son and possibly spending the rest of his life in jail, was that worth it?" Mr. Castro asked during a press conference with police in July.

Police say the suspect followed his pickup truck onto the East Freeway and then onto McCarty Street.

That’s where, authorities say, the suspect fired several shots into the truck. The teen in the pickup truck was shot in the head.

Mr. Castro reported he drove to an area near Highway 59 and McGowen Street and called 911. Shortly afterward, David was taken to the hospital, where he later succumbed to his injuries.

Police released footage of the vehicle they believed was involved in a road rage shooting that killed a 17-year-old leaving a Houston Astros game.

HPD previously released a sketch and surveillance footage of what's believed to be Williams' vehicle.

The short video clips showed a 2011-13, white, 4-door Buick LaCrosse CXL premium package with Venti Ports in the hood, round fog lights, and seven-spoke rims driving on Chartres at Rusk and then at Commerce.