HOUSTON - Cold air has spilled into the Southeast Texas region as a winter storm that spans nearly 3,000 miles across the U.S. produces snow, ice, and subfreezing temperatures.

Texans are seeing some of the coldest temperatures in the state since the deadly 2021 winter storm, which left millions without power or water for days. As of Friday, we will see a hard freeze for counties northwest of Houston.

The freeze is posted from 9 p.m. Friday until 10 a.m. on Saturday with temperatures in the near 20 degrees in the west and north parts of Texas. Houston is not included in this warning, but precautions should nonetheless be taken for pipes, plants, and pets as there will be a light freeze with temperatures above 25 degrees.

Here is the latest on the weather event:

As expected, another Hard Freeze Warning is posted from 9 p.m. Friday until 10 a.m. Saturday for counties north and west of Houston. Temps will be near 20 degrees in these areas and precautions should be taken for pipes, plants, people, and pets. Houston is not included in this warning, but there will be a light freeze with temps above 25 degrees.

Low temperatures Friday morning reached the lowest levels since the end of the great freeze of 2021. February 19th, 2021, was the last time we experienced temperatures in the mid-20s, but this morning's wind chill is brutal - in the low teens.

A wind chill advisory remained in effect through noon Friday. 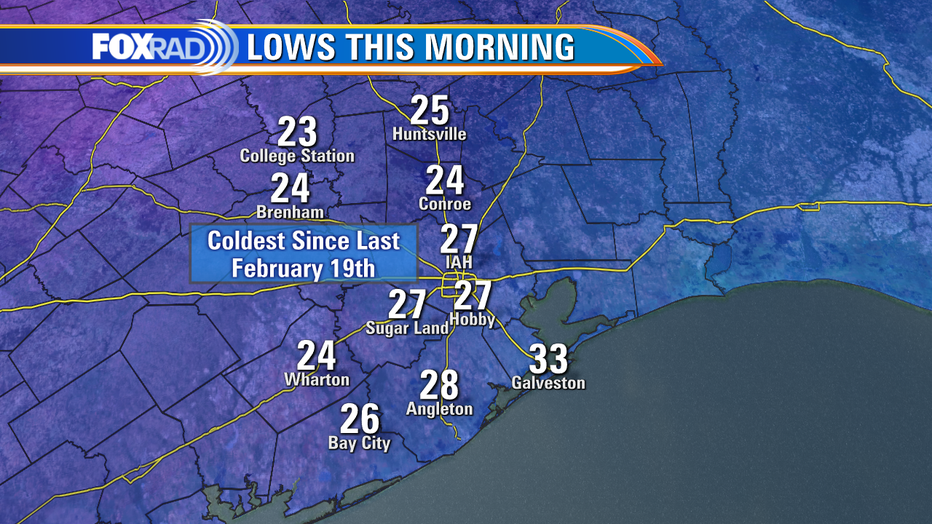 Highs Friday will only reach the upper 30s and low 40s, and you should expect another hard freeze tonight with lows in the mid-20s.

The sunshine will return and help warm things a little during the afternoons Saturday and Sunday. The coming week will bring more sunshine and slightly warmer

A Freeze Warning is also in effect until 9 a.m. Friday for the Brazoria Islands.

Wind Chill Advisory is in effect area-wide until noon Friday as ‘feels like’ temperatures will be in the 10-20 degree range, which can be dangerous if people need to be outdoors and aren't properly protected.

There were many icy areas on overpasses outside of Houston Friday morning, but Houston Transtar reports that most of those have been cleared as of 5 a.m. Drivers should still use caution if they get on the roads.

Dozens of Southeast Texas school districts made the decision to remain closed on Friday in anticipation of inclement weather. Others are operating on a delayed start.

WAYS YOU CAN STAY SAFE

With the arctic blast moving through, there are some steps you can take to make sure you stay safe.

The easiest thing to remember is the 4's: People, plants, pipes, and pets.

The mayor spoke with FOX 26 to share how the City of Houston is responding to the winter storm.

If you experience any type of power outage or are in need of heat, you can visit one of the open warming centers in the area. Click here for the latest list.

Also, be safe on the roadways. The Houston Police Department is asking that people, when possible, stay off the roads after 10 p.m. Thursday night and into the early morning hours on Friday. HPD said they were working Public Works to identify bridges and overpasses that historically ice over during winter weather. Public Works was treating them in anticipation of the road conditions deteriorating.

CLICK HERE FOR THE LATEST FORECAST AND LIVE RADAR