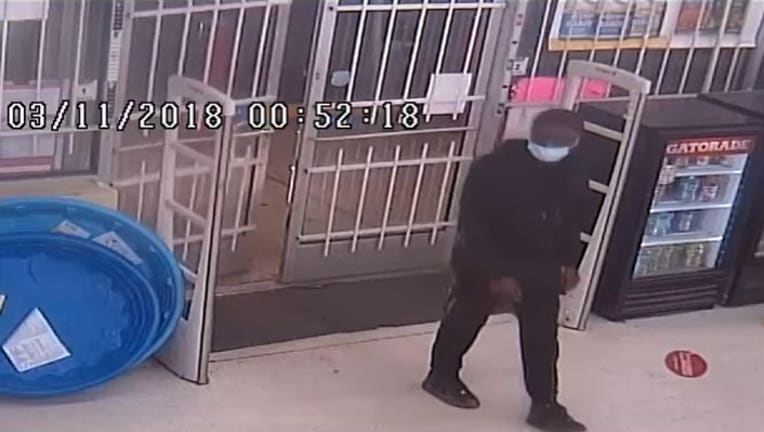 HOUSTON - The Houston Police Department is asking for help identifying a man seen on security tapes using a gun in the aggravated robbery of two different general stores in north Houston.

Security camera footage from May 10 showed the man entering the store located on the 9500 block of Homestead Road. Reports say he hid somewhere in the store until it closed.

Authorities said after employees locked the doors, the man came out of hiding. He reportedly pointed a gun at the employee and demanded the money from the cash register. The employee opened the register and placed the money into a bag.

When all the money was placed in the bag, police said the man pointed his gun at another employee, and forced her to unlock the doors, so he could get out. Officials said he ran in an unknown direction.

The next evening on May 11, the same man entered a different general store on the 9200 block of North Wayside, about two miles away from the first store he robbed.

Security footage from that store shows that he approached an employee working in an aisle and pointed a gun at him. The employee attempted to run, but fell after the man shot his gun. The bullet missed the employee, so he was not physically harmed.

Just like in the first robbery, police said the man forced the employee to open the cash register and put the money into a bag.

He left the store in an unknown direction.

Police said the suspect is described as a Black male, 17 to 18-years-0ld, with short black hair, medium build, and wearing all black.