Another winter storm is expected from Tuesday night through Wednesday. Here's the possible snowfall and it looks much lighter than the last storm. However, it does look like more freezing rain will be possible and that means hazardous roads.

HOUSTON - A winter storm brought snow, sleet, and freezing rain to southeast Texas on Monday, with temperatures dipping into the teens and wind chills in the single digits.

Winter storm leaves millions of Texans in the dark

Millions are without power Monday night after a historic winter storm rolled through Houston. Many families will be without heat on what is being described as the coldest day in decades.

The winter storm warning is only in place for College Station, Houston, Pasadena, and Sugar Land. 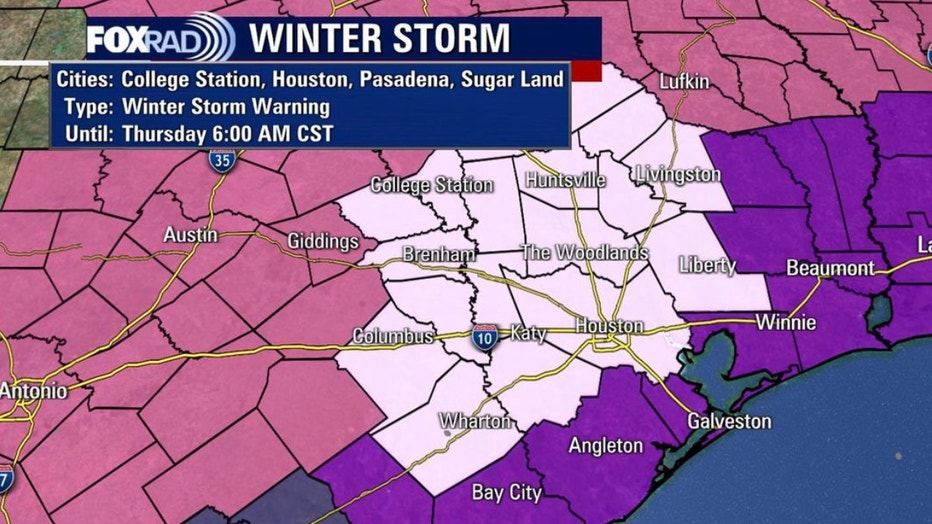 This warning is mostly based on precipitation, not temperature.

The Wind Chill and Hard Freeze Warnings in southeast Texas remain in effect until noon on Tuesday with Wind Chills expected to remain in the single digits most of the day.

The combination of strong winds and very cold air will create dangerously low wind chill values. This will result in frostbite and lead to hypothermia or death if precautions are not taken.

It's only going to get colder Monday as the skies clear and more cold air moves into SE Texas. The Houston area can expect single-digit lows and even down into the teens along the coast.

On Tuesday, after our coldest start in possibly a few decades, we should warm close to freezing.

Very cold temperatures have remained steady all morning long with wind chill values well below freezing and, at times, approaching 0°. This arctic air will remain in place as we head into the evening hours and if our skies clear, we could be dipping into the single digits this evening.

The winter storm is causing dangerous conditions on roadways. Local officials are warning the public to avoid traveling as ice is reported on roads in more than 150 spots across Houston on Monday morning.

The public is also being asked to conserve electricity. The Electric Reliability Council of Texas, which manages the flow of electric power to more than 4.3 million Texas customers, entered emergency conditions and initiated rotating outages at 1:25 a.m. Monday.

WHAT'S AHEAD IN THE FORECAST

Southeast Texas was experiencing a once in a generation type weather event on Monday morning.

Wind chills were below 0 in spots with single digits areawide. 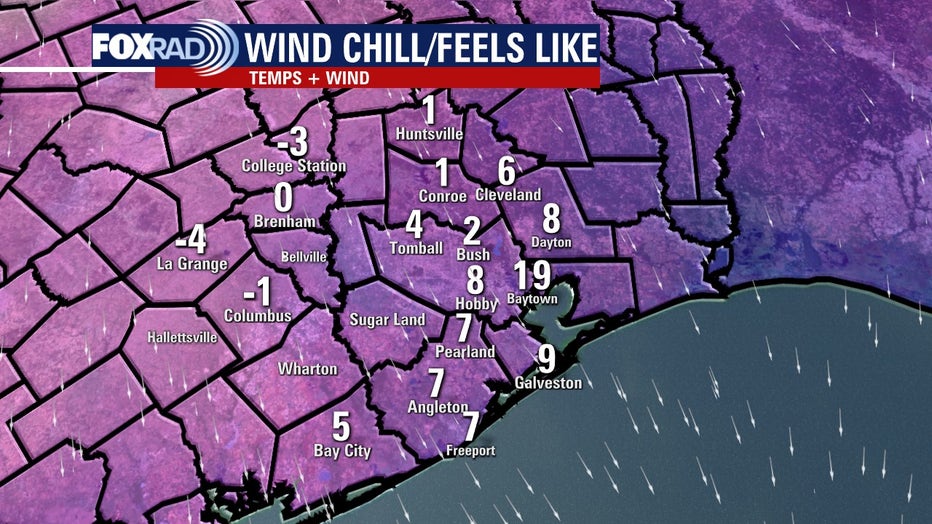 Wind chill in the Houston area as of 4 a.m. Monday

Snow and sleet totals in southeast Texas ranged from 0.1" in Galveston to 4" in College Station. Three inches or more fell in Huntsville, Cypress, Tomball and Kingwood. 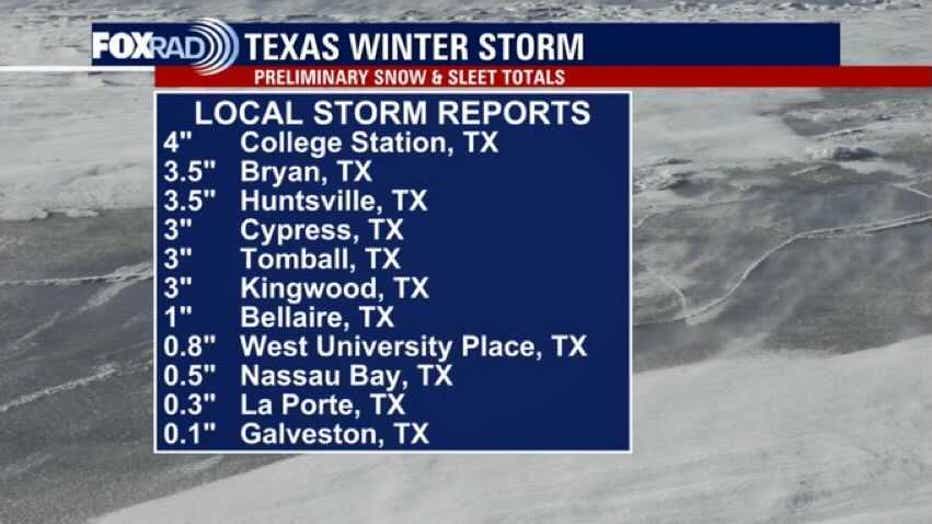 Here are some preliminary snow and sleet totals for southeast Texas. College Station tops the list with 4 inches of snowfall.

Tonight's lows could be close to all-time records.

After a frigid start on Tuesday, some areas may warm above freezing while areas, especially north, will remain below 32°.

As we work our way into Wednesday, another winter storm will impact the state of Texas bringing the threat of freezing rain and sleet to the region. At this time, it doesn't look like we'll be dealing with the extremely cold temperatures like we're having at the moment, but another hard freeze will certainly be possible Thursday into Friday.

In addition, it's possible we warm above freezing on Wednesday and therefore might see rain instead of freezing rain and/or sleet. More details will be worked out as we head into the next 12 to 24 hours.

Mayor Turner says in the next few weeks/months, the Texas legislature will try figure out why they weren't prepared for the storm.

Some are losing power due to the weather conditions, while others are under a rotating outage initiated by the Electric Reliability Council of Texas.

Power outages a huge issue for neighborhoods in Katy

FOX 26's Tom Zizka went out to Katy talking to folks having issues with their power during the winter storm.

ERCOT, which manages the flow of electric power to more than 26 million Texas customers, says they entered emergency conditions and initiated rotating outages at 1:25 a.m.

Click here for tips on how to stay warm and safe during a winter storm power outage.

If you're without power during the historic winter storm, there are tips to stay warm and safe during an outage.

THE DANGERS OF ICE 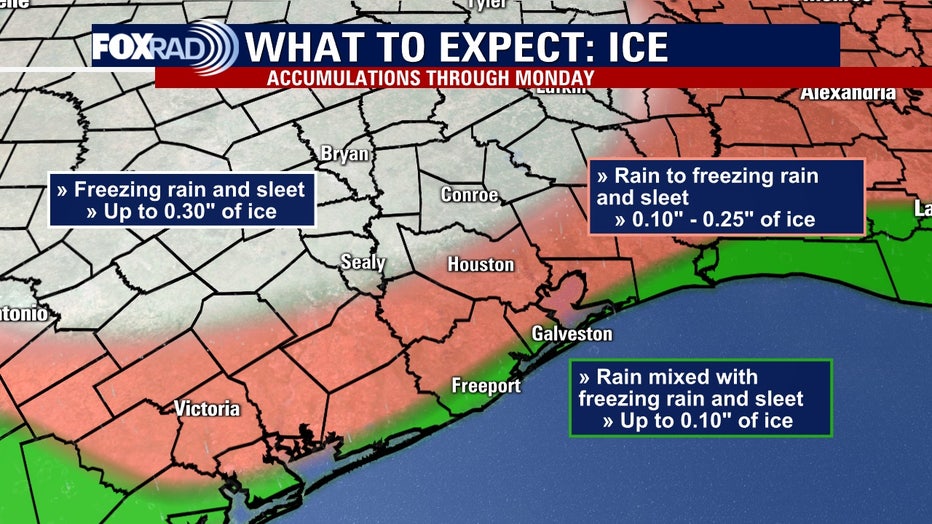 The threat of accumulating ice will make traveling hazardous on area roads, especially on bridges and overpasses.

If we see ice accretion on elevated surfaces, notably power lines, that could lead to power outages.

When freezing rain accumulates on elevated surfaces, that adds additional weight to the objects it's falling on, like trees. Tree limbs could also snap as winds pick up on Monday if ice accumulations are greater than 0.25".

Local authorities are asking the public to avoid traveling on icy roadways. On Sunday, Houston Fire Chief Sam Pena said there were nearly 120 motor vehicle accidents throughout the city. A 10-car pile up was reported on I-45 south of downtown.

The ice also affected air travel. The airfields at Hobby Airport and Bush Airport were closed due to ice accumulation.

Crews worked to de-ice runways through the night, and they continued to treat them on Monday morning.

Travelers are asked to check with their airlines for flight information.

Airfields at Hobby, Bush airports closed due to ice

The airfields at Hobby Airport and Bush Airport in Houston are closed due to accumulations of ice. Travelers are advised to check with their airlines.

There are several potential dangers when winter weather hits. Long periods of below-freezing weather can be hazardous for people, pets, plants, and pipes.

Water pipes are likely to freeze and burst, so should be treated to prevent serious damage. Be sure to disconnect any outdoor hoses, drain them and store them inside a protected area, such as a garage or indoors. Cover and/or wrap exposed faucets and pipes - including those outside the home or in unheated crawl spaces, such as attics, garages and other areas.

When winter weather strikes no matter where you are, there are four things that you need to consider and think about before the cold chill hits.

Be sure to keep everyone inside a building or structure with adequate heating. If you must use a portable space heater to warm your home, be sure to follow all the recommended safety information provided with the unit. Improper use of portable space heaters can lead to fire, serious injury, and death.

Shelters and warming centers are open for those without a warm place to stay. Check the list here.

Bring pets inside and move other animals or livestock to sheltered areas to provide extra protection from the cold weather.

The winter weather can affect plants that are sensitive to colder temperatures. Bring potted plants inside or store in your garage.

Plants that aren't cold-hardy could suffer and die. Move them indoors or cover them with a cloth fabric.