Have you seen Christopher Flores?

With friends and family by her side, Gloria sat down with FOX 26 anchor Kaitlin Monte to talk about her son Christopher Flores, 53, who she describes as a fixture in his neighborhood near Houston's White Oak Bayou, just north of the loop.

"Everybody knows his truck," says Gloria, proudly noting her son took auto mechanics in school. "He loved cars. Ever since he was a little boy."

On Saturday, August 21, 2021, Christopher told friends he was going to meet up with someone. The following Monday, his mother got a call from his apartment complex.

"They needed to get in touch with Christopher because his apartment had caught on fire," says Gloria. She explained that Christopher had not answered their calls. His truck was nowhere to be found in the complex. He did not have roommates or any reason Gloria could think of that would have led to a fire breaking out.

RELATED: Where is Emmanuel Ramos Perez?

Gloria immediately went to Christopher's workplace at Relevant Solutions on Sam Houston Parkway North where he had job as a valve technician. She explains Christopher had been preparing the truck to attend the Autorama. He had won top honors there before, so she was praying he and the truck were at the shop and perhaps too busy working to answer the phone. When she arrived, she was told he had not shown up for work the day prior.

At that point, Gloria reported him missing.

Soon, Gloria received a tip: a woman claiming her relative knew what happened to Christopher. "The relative had said there was harm done to him," says Gloria.

NOTE: The person who made the comment about harm to Christopher is not currently charged or formally implicated by law enforcement in the case at the time of this article, so FOX 26 is not able to reveal their identity. For the sake of this report, we'll refer to this person as Alex.

Alex, who made the ominous comment, is a relative of Emmanuel Perez, who was recently featured on FOX 26 for going missing in August 2021. Gloria claims Christopher had befriended Alex and been trying to help Alex get back on their feet.

Months after Emmanuel's disappearance, Christopher dropped Alex at Emmanuel's home. The next day, it caught fire.

Gloria recalls Christopher texting her in shock. "After he mentioned that, he went missing two weeks later," says Gloria.

Gloria believes Alex is the person Christopher went to meet the night he vanished.

Family of Emmanuel Perez claim Christopher had given them a tip prior to his disappearance, encouraging them to search the Houston bayous for Emmanuel's body.

After Christopher vanished, Gloria got another call from Emmanuel's family. Gloria was told Alex had said, "I got 'em. I did him good. He's in storage right now."

Unclear whether the comment was about Christopher or not, Gloria says Christopher's family and friends swarmed the Aztec Storage facility on West 34th Street where Alex was known to have several units. They were told they could not enter since they did not own the unit.

Then, Gloria says their suspicions only grew when, "time passed and that public storage caught on fire."

Three fires. Two missing people. Could it all be a wild coincidence? Investigators on this case tell FOX 26, they have yet to find the elements needed to formally tie the events together or name a suspect. Gloria is desperate for help to find clues or evidence to unlock the next steps in the case.

Gloria is no stranger to loss: her husband died when Christopher was not even a year old, her oldest son committed suicide at age 18, and her grandson (Christopher's son) died in a car accident, leaving behind Gloria's great-granddaughter, who she now helps to raise. 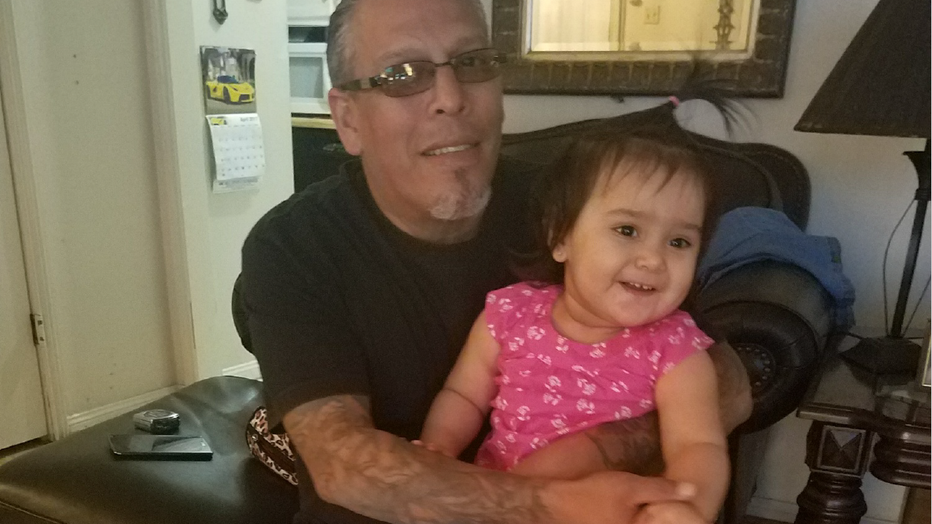 Christopher was last seen was wearing blue jeans, tan work boots, and a navy blue short-sleeved, button-down shirt with the words "Relevant Solutions" printed on the front. Christopher has tattooed sleeves on both arms, and tattoos on his back. He also has a chicken pox scar on the side of his left eye.