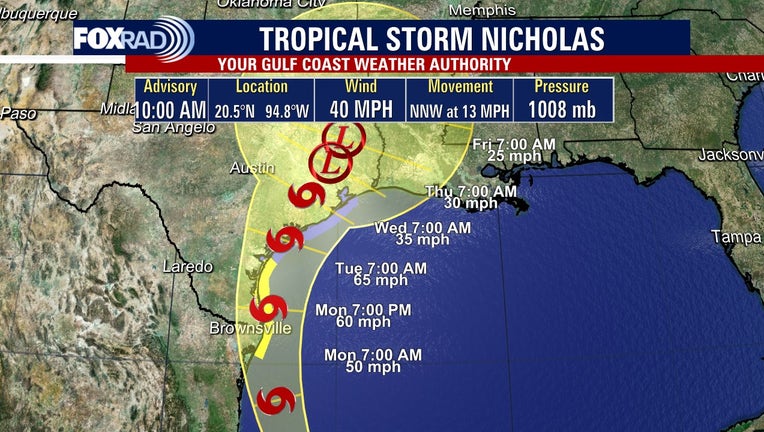 HOUSTON - Tropical Storm Nicholas has formed in the Southern Gulf of Mexico, making it the 14th named storm during the 2021 Atlantic Hurricane season.

As of the 10 a.m. Sunday update from the National Hurricane Center, Tropical Storm Nicholas is located about 405 miles south-southeast of the mouth of the Rio Grande.

We are your Gulf Coast Weather Authority and our Chief Meteorologist Dr. Jim Siebert and Meteorologist John Dawson delivered the latest on Tropical Storm Nicholas and what to expect for the Houston area.

Tropical Storm Nicholas is currently moving north-northwest near 13 mph and the general motion is expected to continue through Sunday night. A slower northward or north-northeastward motion is forecasted by late Monday or Monday night.

As a precaution, Texas Gov. Greg Abbott ordered state resources to be placed on standby along the length of the Texas Gulf Coast.

"We will continue to closely monitor this storm and take all necessary precautions to keep Texans safe," Abbott said in a statement. "I encourage Texans to follow the guidance and warnings of their local officials and be mindful of potential heavy rain and flooding."

Among the state resources placed on standby were air and boat rescue teams and emergency medical groups.

Gradual strengthening is forecast as Nicholas approaches the northwestern Gulf Coast in the next day or so. Tropical-storm-force winds extend outward up to 105 miles from the center.

The main concern in Houston is increased winds and heavy rain with flash flooding, but looks like it will take a straight shot to Corpus Christi or Matagorda County, or somewhere in between.

According to FOX 26 Meteorologist John Dawson, Nicholas has some uncertainties for the Houston-area, but much of southeast Texas remains under a FLASH FLOOD WATCH through Tuesday evening.

A tropical storm warning is in effect for the coast of Texas from the mouth of the Rio Grande to Port Aransas.

The Government of Mexico has issued a tropical storm warning from Barra El Mezquital northward to the U.S./Mexico border.

A storm surge watch is in effect for the coast of Texas from the Mouth of the Rio Grande to High Island.

A tropical storm watch is in effect for the coast of Texas from North of Port Aransas to High Island.

As Tropical Storm Nicholas moves toward the Houston area, it is expected to be a significant rainmaker for the area.

Current forecasts are showing between two to six inches, with locally heavier amounts of rain possible along the coast. 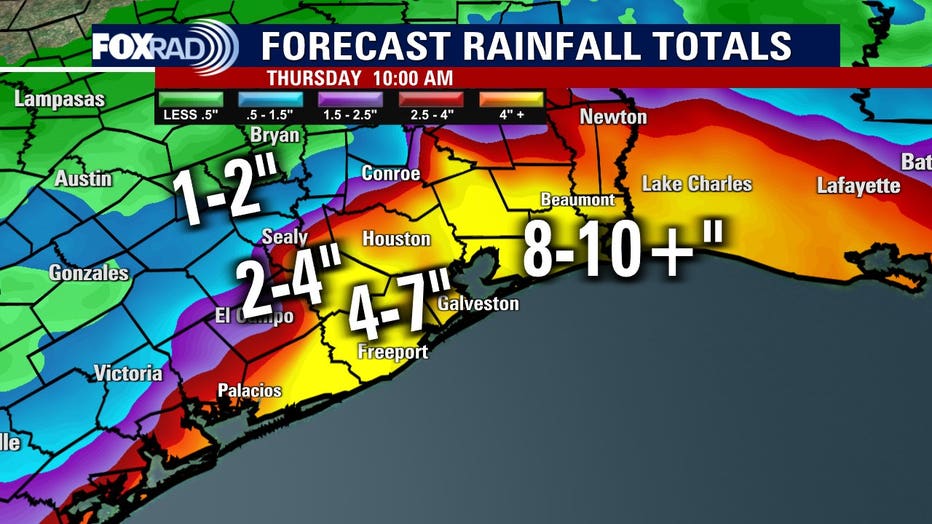 Be aware as the storm arrives, heavy downpours should be expected along with flash flooding. Remember, turn around, don’t drown.

GOOD INFO: What to do if your car takes in water