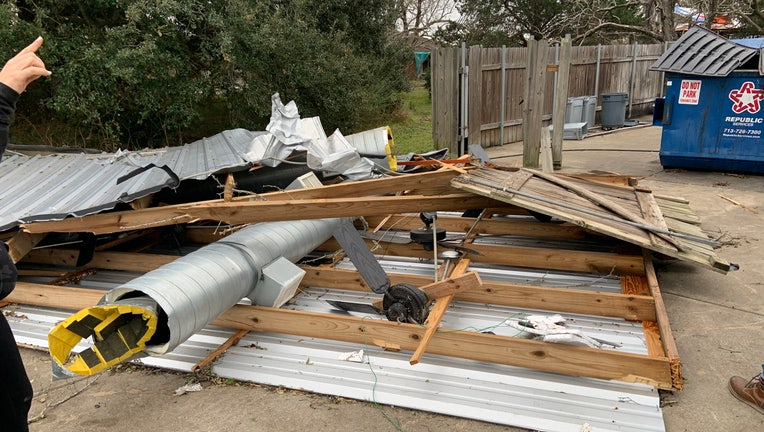 MONTGOMERY, Texas - The National Weather Service confirms at least five tornadoes touched down in the Houston area during Saturday’s storm.

Around 9:30 p.m. Saturday, employees at Ransom’s Steakhouse & Saloon in Montgomery were cleaning up while some customers finished eating. Suddenly, the restaurant’s roof blew off and a metal beam broke through the ceiling.

At least 10 people were inside.

According to the owner, Hilliary Dumas, the staff and patrons hid inside an office and prayed that the tornado would quickly pass.

The next morning, piles of debris were found on every corner of the parking lot.

"We lost the entire south side patio. And the front façade of our building.

"We had a covered patio with air conditioning system, fans, electricity, everything and that entire patio, roof and framing, everything blew off and scattered," Dumas said.

"We had several inches of water on the floor and different parts of the restaurant and the kitchen," Dumas continued.

Fortunately, no one was injured.

National Weather Service teams surveyed Saturday’s damage in Montgomery and classified it as an EF-0 tornado, meaning winds were blowing at 60-85 miles per hour.

Other nearby businesses suffered similar damage.

"We’re fortunate that it’s really just a handful of businesses that are impacted and we’ll be able to rebuild. Business and buildings you can rebuild again, lives you can’t," Dumas said.

Ransom’s Steakhouse & Saloon is a family-owned business located on 300 C B Stewart Drive in Montgomery. The restaurant was closed for cleanup and repairs Sunday and likely, Monday.

Dumas said she hopes to reopen Ransom's by mid-week.