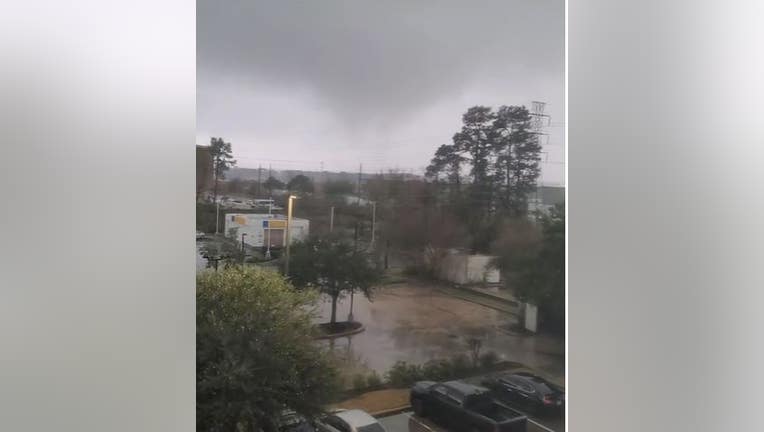 Screenshot from FOX viewer dennismenser6 via TikTok (Shared with permission)

Much of the Houston area experienced some gloomy weather Saturday with severe thunderstorms and a tornado warning.

A FOX viewer recorded what appears to be such a sighting and shared that on social media. The National Weather Service confirmed Sunday Houston experienced an EF-0 tornado, meaning there were winds up to 85 miles per hour.

Other parts of southeast Texas saw severe flash flood warnings as well as tornado warnings past midnight. In fact, residents of Humble and Montgomery, Texas were shaken by a tornado overnight Sunday, damaging several structures, trees, and power lines throughout the area.

TRACK THE TROPICS WITH OUR INTERACTIVE RADAR

The NWS described the tornado in Humble and Kingwood as an EF-1, which involves high winds moving up to 110 miles per hour. In Montgomery meanwhile, was surveyed by the NWS as EF-0, meaning less severe than the one in Humble, as winds are much lighter, moving up to 65 miles per hour.

FOX 26 Meteorologist John Dawson breaks down the aftermath of the severe weather, tornadoes in the Houston area and provides a look at the future forecast this week, which will be starkly different than what we encountered Saturday.

However, we should look for light rain and showers through lunch on Sunday. Additionally, a weak front will clear out the rain at the end of the weekend. Southeast Texas should see a quiet start to the workweek.