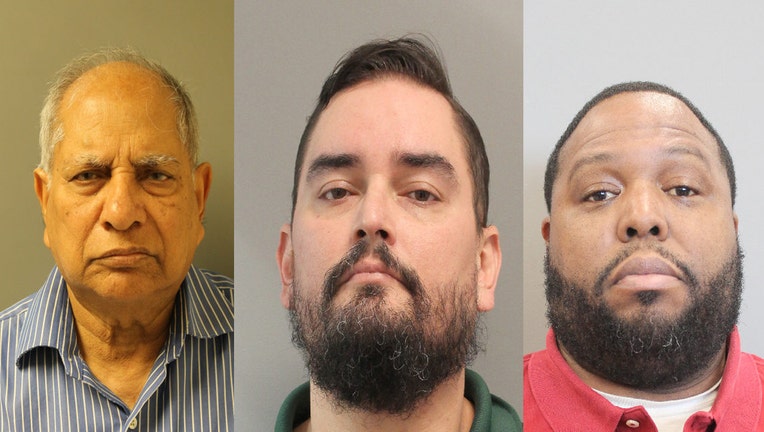 Qamrul Haque (L), James Bradley (C), Raymon Williams (R) are HISD elementary school staff members who have all recently been charged with indecency with a child.

HOUSTON - A third Houston ISD elementary school teacher has been arrested and charged with indecency with a child in a matter of days.

According to court documents, a 9-year-old student at Cunningham Elementary raised her hand and asked Haque to help her spell a word.

READ MORE: Parents say alleged child predator was transferred to their HISD school without their knowledge

The student reported that Haque stood behind her and pushed his stomach on her back leaning forward. The student then told officials that she tried to push him back, but Haque placed his hands on her shoulder and moved them down to touch her breast.

The news comes after two other HISD elementary school teachers were charged with inappropriately touching students within the last week.

Raymon Williams, 46, allegedly touched a 10-year-old girl at Kashmere Gardens Elementary School on the shoulders and between her legs. The victim told investigators this happened to her more than once and in view of other female students.

HISD released the following statement and background on the three accused teachers:

HISD is reviewing steps taken in each of the recent cases involving student allegations of inappropriate conduct. The district is examining its processes and protocols to ensure the educational environment remains a safe place for our students. In each of the recent cases, the district followed its existing protocol of immediately reassigning the accused staff member to home duty. Additional action followed when the district was able to substantiate allegations. HISD is cooperating with law enforcement authorities to facilitate the judicial process in these cases. Protecting the well-being of our students is the top priority for HISD.

REGARDING THE ARREST OF JAMES BRADLEY, Lockhart Elementary School teacher:

REGARDING THE ARREST OF QAMRUL HAQUE at Cunningham Elementary School

The teacher was removed from the campus immediately and exited from the HISD substitute pool following the completion of the district’s investigation.