The Painted Churches of Texas

These churches are right here in Texas but feel like a trip back-in-time to Europe.

SCHULENBERG, Texas - Sometimes, when on a trip, it's worth taking a detour off the path because you’ll never know what history you can come across.

If you are making your way from Houston over to San Antonio and have a couple of hours to burn, you may want to dedicate some time to see the Painted Churches of Texas.

Nestled in the sleepy town of Schulenburg, this One Tank Trip is only an hour and a half from Houston. Once you get there, give yourself some time to drive to each of the churches and tour them. 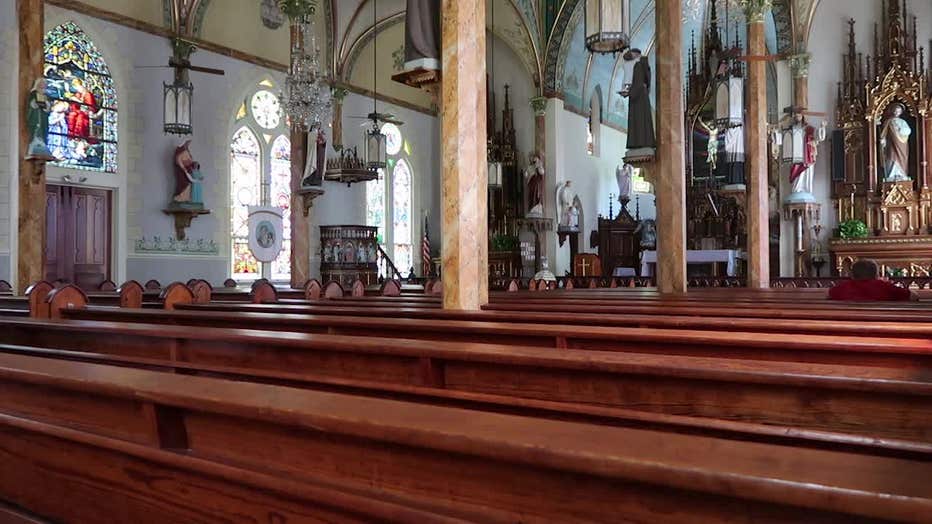 St. Mary Roman Catholic Church has been called "the Queen of Painted Churches".

Any passerby may assume each church is just a regular church from the outside, but once you open the doors to the inside, you come across an array of vibrant colors bursting with creativity and inspiration – which is why it’s been called the Queen of Painted Churches.

The idea came by German and Czech immigrants coming to Texas for religious freedom. The churches represent their hopes for economic prosperity. They painted the inside this way to continue to inspire and motive each other and as a celebration of their freedom.

Once inside the church, visitors are immediately greeted with bible verses dancing along the walls in blue and gold.

Further inside, there are 18 glass-stained windows, each named for the German family that bought it. Above is a chandelier and a pipe organ is nearby. The ceiling above the altar is decked out in sky blue and gold. 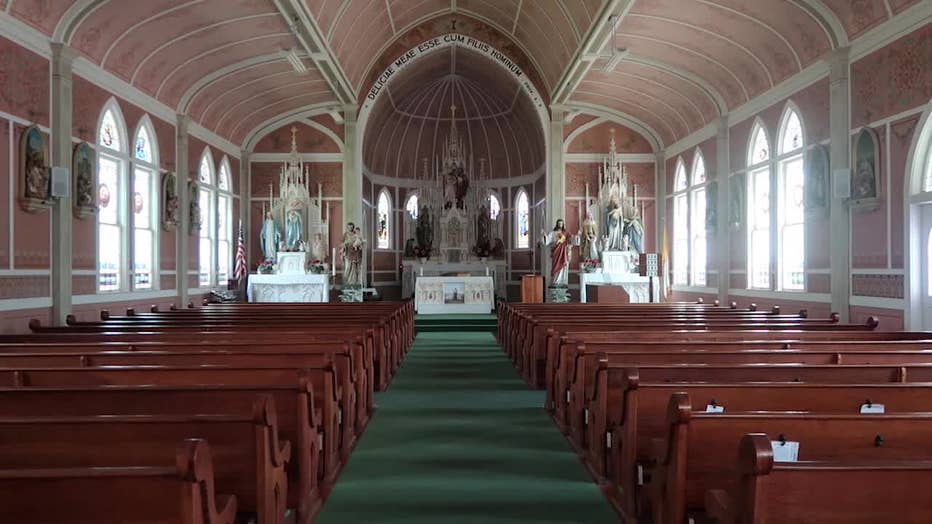 St. John the Baptist Catholic Church has been nicknamed "The Pink Church".

The next one on our stop is the St. John the Baptist Catholic Church, a cute white church with a long sideway leading up the doors. It has been nicknamed “The Pink Church.”

Once inside, you understand why it is called that. The entire interior is coated in pink with subtle accents of green. Statues also join you throughout the church.

This actually is the third church built in this spot with the first destroyed by a tornado and second by a fire. The cross, along with some of the statues, were saved in the fire which tells a story of the importance of having a church to the immigrants. 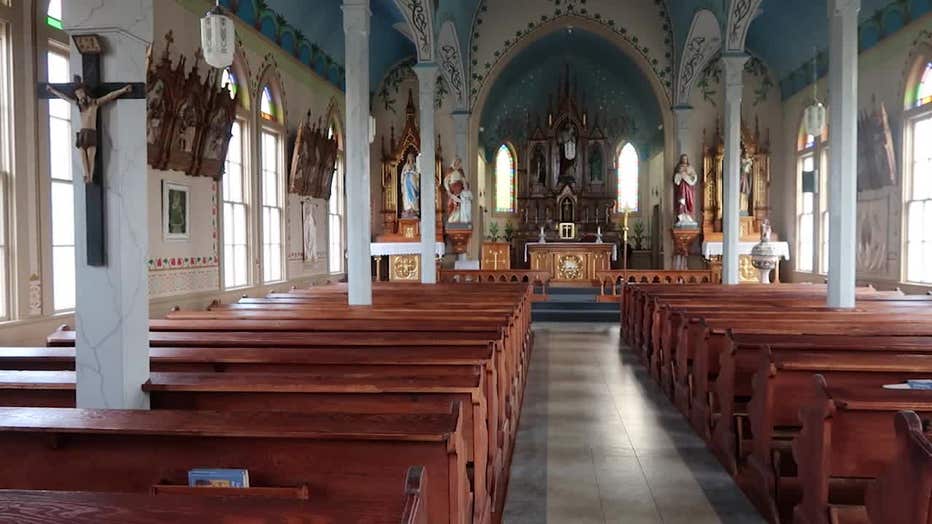 Saints Cyril and Methodius Church is known as the "Mother of Czechs in Texas".

The next church we came across is Saints Cyril and Methodius Church. It is known as the Mother of Czechs in Texas. This church is considered a historical landmark as it was built in the early 1900s.

It replaced an earlier church that was destroyed by a hurricane in 1909. The outside, also painted in white, is surrounded by fields of flowers from the residents nearby.

Inside, the ceiling is painted in boastful colors of blue sprinkled with gold stars. Floral decor is also stenciled along the borders of the windows, which let in lots of sunshine as intended to give the designs proper lighting. It has been painted by previous generations time after time. 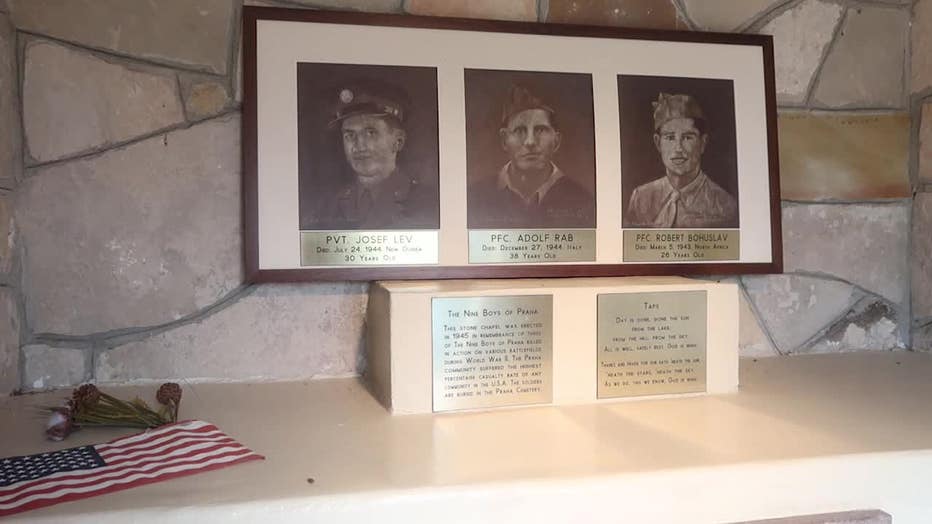 The final church I went to was St. Mary’s Church in the Praha Community.

The grounds alone were stunning with a high steeple that can be seen for miles and three memorial shrines that honor Praha’s nine men who died in World War II. When visitors walk through the door, blue and white checkboard lead to the apse that has angels and flowers painted as the Garden of Eden. A chandelier glistens in the middle of the room and gold wraps around the columns that hold up the structure.

The city even offers guided tours if you are interested in learning about the history behind any of these churches. All you need to do is reserve the day in advance. The tours can take anywhere from three to four hours depending on how much time you take. It can also be self-guided, as well.

Nonetheless, these churches are just a few of the many scattered throughout Texas, but feels like a trip back-in-time to Europe. 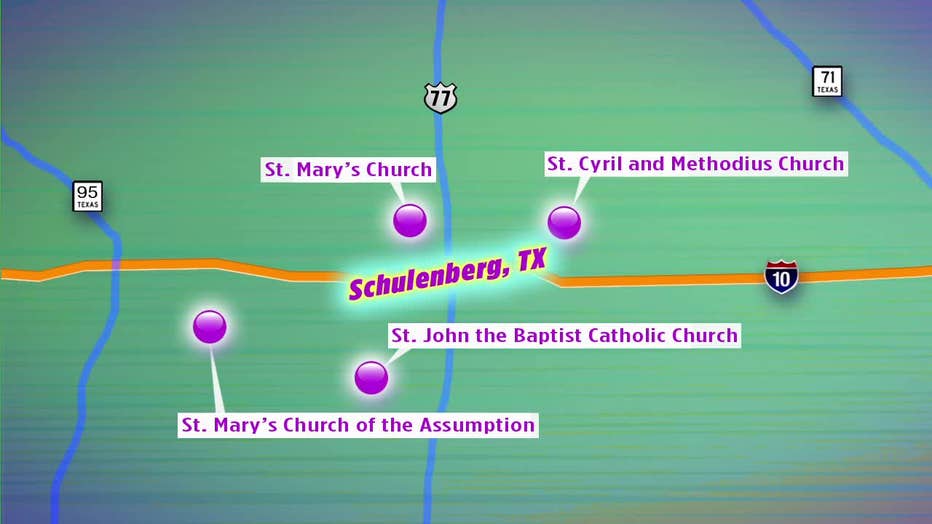