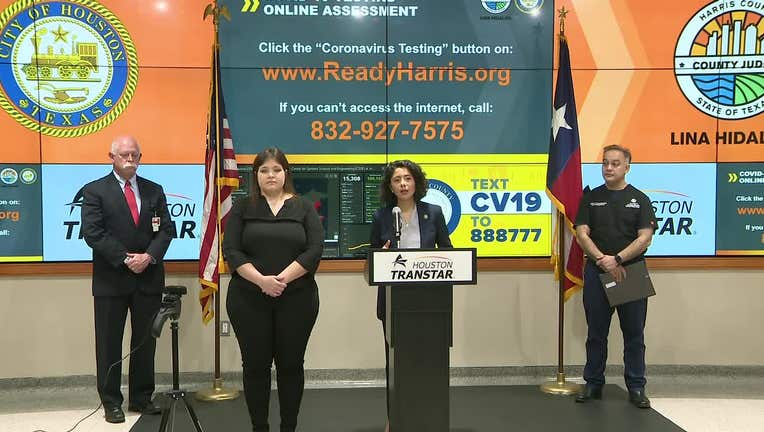 HARRIS COUNTY, Texas - Harris County Judge Lina Hidalgo says there is no shelter-in-place for the county ... yet.

But before she dove into the testing she said, "I want to address the shelter-in-place question people have been asking."

She clarified that "shelter-in-place" is not the right term for the southeast Texas region. "It evokes hurricanes, chemical incidents, makes you think of an active shooter drill whether you're going to get the all-clear eventually," she said.

Judge Hidalgo said she, along with Houston Mayor Sylvester Turner and neighboring county judges, are working on the next steps for the community.

"It may be that we issue a stay-at-home order or something of the sort, but we are doing our due diligence today," Hidalgo said. "We will make an announcement as soon as we are done running things down and making the decision in the way we need to."

The news comes a day after Dallas County issued a shelter-at-home order, and a few days after Mayor Turner rejected social media rumors that the City of Houston would be shutting down.

During a press conference on Monday, Mayor Turner said, "When you look at the orders that exist in California and New York and some of the other places, what is functionally taking place in the City of Houston and our region in large mirrors what they ordered."

Currently, multiple cities and counties, including Harris County and the City of Houston, are under public health declarations, which canceled or postponed several events, closed restaurants for dining in.

"The question then becomes, what is it that we are trying to achieve and how do we do it in such a way that we are being truthful and transparent for the people that are looking to us for guidance and direction,” Mayor Turner said.