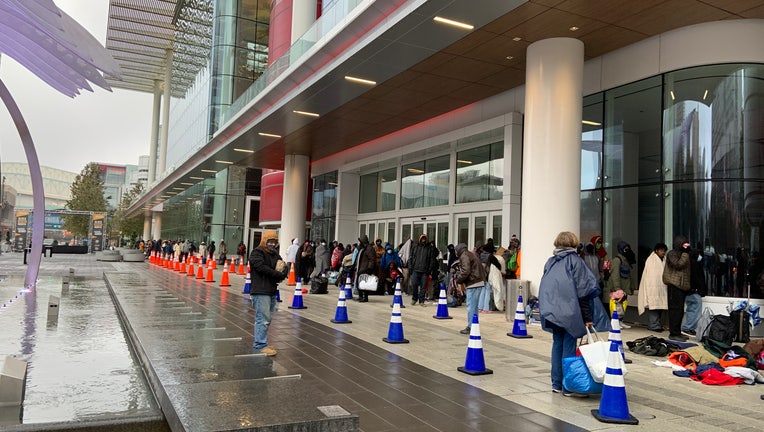 Hundreds of homeless waiting in line to get warm inside GRB

HOUSTON - Hundreds of homeless Houstonians seeking a roof over their heads are flocking to the city’s emergency shelters as temperatures dip below freezing.

The city initially opened the George R. Brown Convention Center as the largest emergency shelter Sunday, but around 5:30 PM the center reached capacity at 500 people.

"I’ve been waiting since like middle of the day. Not too good. I’ve got high blood pressure and I think I’m catching a cold. It’s getting cold out so I’m getting sick," said Luis Bayron, one of the people seeking shelter at the GRB.

"Everybody who’s on the street needs to get here tonight or they’re going to freeze to death.I’m cold, my plates in my body hurt. I’m sick. I’m wanting to puke," said Thomas Thompson.

Inside, first responders were standing by with food, water, PPE and basic medical care to help out.

However, because of COVID, no outside supplies or donations were being accepted so volunteers had to personally hand items out themselves.

"Right now, we’re not receiving anything here. In fact, we’re limiting what they can bring into the center -- one bag that they can store under their cot," said Houston Fire Chief Sam Pena.

As the sun began to set, demand to get warm got so high that the GRB reached capacity. Instead, officials began turning the overflow to Lakewood Church.

"There’s going to be COVID protocols in place. We have screening at all the entrances. We’ll be monitoring temperatures and checking temperatures periodically, so there will be screening in place and security in place," said Matt Osteen, a representative with Lakewood Church.

Osteen said Lakewood will open its doors through at least Tuesday and may stay open longer if necessary.

Mayor Turner said so far, the city has not turned anyone who needs a place to stay away.

Anyone who needs help, should call 311 or 211 first, and an official will point you in the right direction.