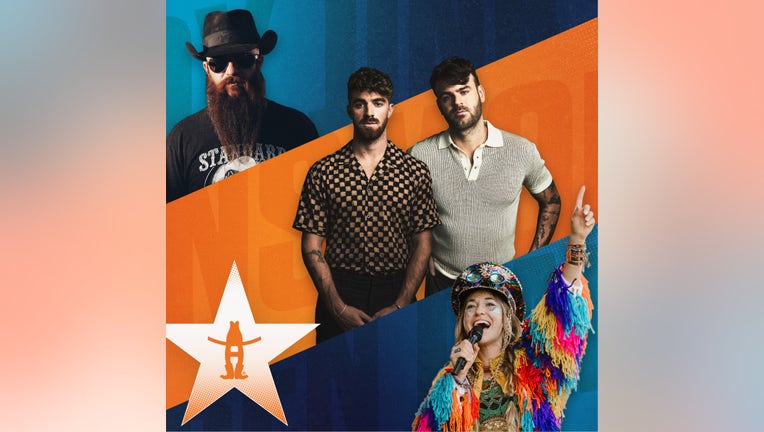 HOUSTON - The Houston Livestock Show and Rodeo is gearing up for their 2023 season.

In the past week, Houston Rodeo has announced three entertainers scheduled to perform in March for the 2023 Rodeo. Organizers say Lauren Daigle, The Chainsmokers, and Cody Jinks will perform during the Rodeo.

SUGGESTED: Houston Rodeo season tickets: Price, when they go on sale, how to buy

The three are joining Parker McCollum who was announced previously as the event's opening-day performer on Feb. 28, 2023. Lauren Daigle will perform on March 2, The Chainsmokers on March 10, and Cody Jinks on March 13.

Teens get competitive for calf scramble at Houston Rodeo

Dozens of teens prepare for the calf scramble event that can get pretty competitive and fun to watch.

"In the spirit of giving and the upcoming holiday season, we wanted to surprise Rodeo fans by revealing three entertainers who will perform at RODEOHOUSTON in 2023, giving them an early opportunity to purchase tickets, whether it’s for themselves or someone special on their holiday shopping list," said Chris Boleman, Rodeo president and CEO. "Lauren Daigle, The Chainsmokers, and Cody Jinks are such a diverse group of performers, and we are excited to give fans a sneak peek of the 2023 RODEOHOUSTON lineup that will offer something for everyone."

According to organizers, individual tickets for these three performances will go on sale Dec. 8 at 10 a.m. The waiting room will open at 9:30 a.m., they add.

Ticket prices start at $25, plus a $4 convenience fee. You can get more information on purchasing concert tickets here.