HOUSTON - The suspect believed to have shot three Houston Police Department officers following an incident involving a chase and carjacking on Thursday afternoon is in custody following an hours-long standoff. 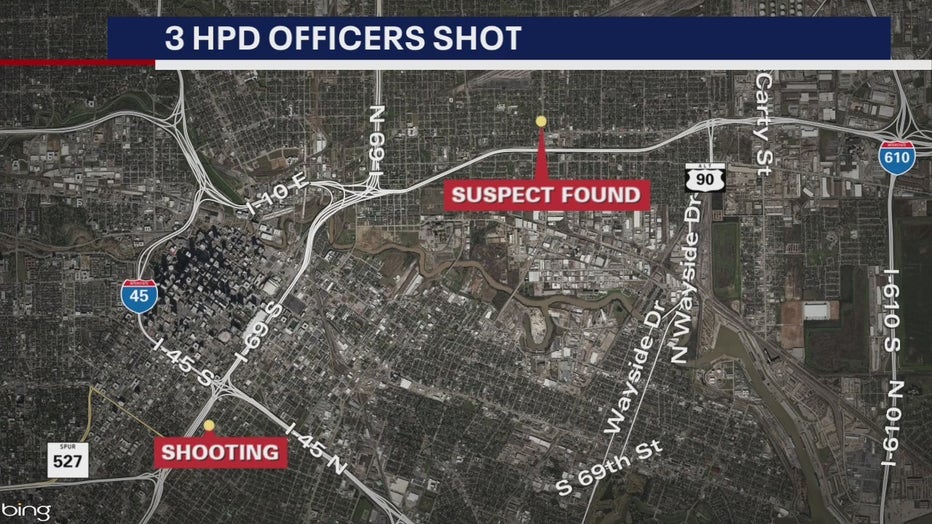 When police arrived, they were given information on the suspect's name and vehicle he was driving.

Officers spotted the vehicle and attempted to conduct a felony traffic stop.

That's when, police said, 31-year-old Roland Caballero, got out of his vehicle and fired several shots at three officers, who returned fire and possibly struck the suspect in the neck area.

Police said Caballero then carjacked a white Mercedes Benz at gunpoint and drove to the 1800 block of Lockwood.

Houston Mayor Sylvester Turner joined HPD Chief Troy Finner and other city officials to share details on a shooting near downtown Houston, where three officers were shot after a chase.

We're told two officers were self-transported and the third officer was taken to the hospital by the Houston Fire Department.

Turner added that he met with the injured officers and some of their family members at the hospital on Thursday evening saying they were in "good spirits" and "talkative."

Suspect in custody after hours-long standoff with police

FOX 26 Reporter Gabby Hart has the latest after the suspect believed to have shot three Houston Police Department has peacefully surrendered to police.

Other officers then went to Caballero's home and found the stolen vehicle outside.

SWAT Team officers arrived on the scene and attempted to make contact with Caballero, but he ignored them and barricaded himself inside the home, police said.

Authorities said as SWAT officers were on the scene, the suspect fired shots at them and officers returned fire.

After a standoff that lasted several hours, Caballero was taken into custody around 7:45 p.m. with his hands up, according to Houston police.

Caballero did have a gunshot wound to the neck and was taken to the hospital in stable condition, where he currently remains.

The Houston Police Department released dispatch audio from the search for the suspect that injured three officers in a shooting and the reporting of the officer injuries.

In a video obtained by FOX 26, you can hear dozens of shots being fired between police and at least one suspect in Midtown.

Video shows the gunfight between a suspect and Houston police officers on a street just south of downtown. At least one gunman is seen running from the scene as officers give chase. Three officers were injured in this exchange.

FOX 26 Isiah Carey spoke with the man who shot the video above of the shootout with Houston police.

FOX 26 Reporter Isiah Carey speaks with a man who recorded the shootout between Houston police officers and a suspect near the Midtown area. Three police officers were injured in this shooting.

FOX 26 Reporter Matthew Seedorff has the latest as the suspect police believe shot at them is facing numerous charges.

In the video, the gunman can be seen firing shots at police while forcing the woman out of her car.

As the gunman barricaded himself inside a home off Lockwood, nearby homeowners took cover.

"I felt like I was in the middle of battle or something," said Gabriela Reid. "I took off and hid in my laundry room in-between the washer and dryer. I was hoping a stray bullet wouldn’t hit my house."

Dozens of gunshots were exchanged between Caballero and police for hours.

Neighbors say they don’t remember ever seeing Caballero outside.

One resident FOX 26 spoke with said he thought he heard 100 shots during the confrontation between police and the suspect.

Another resident witnessed the shooting on Thursday and shared her reactions with FOX 26.

FOX 26 Reporter Gabby Hart spoke with one witness who witnessed the shooting of three Houston police officers on Thursday afternoon.

"We heard all of the gunshots," said Samuel Celi, a witness.  "There were so many, maybe a hundred, maybe more."

"I saw [the suspect] jump out of the passenger’s side and take off on foot," said Ben Simon.  "He had, I don’t even know what kind of gun it was.  It looked like a machine gun."

"It was definitely scary," said a witness named Paul.  "Definitely attention bringing.  Everyone is out.  [We’re] not used to this kind of thing."

FOX 26 Reporter Matthew Seedorff has more after three Houston Police Department officers were injured in a shooting on Thursday afternoon.

The afternoon shooting of three Houston Police Department officers has local officials reacting to the shooting.

Houston Mayor Sylvester Turner said in a statement, "Three Houston Police Officers were shot in the line of duty today, and I am relieved to hear their injuries are non-life-threatening. My thoughts and prayers go out to them, and I will be at the hospital soon to check on their recovery, thank them for their service and speak to their families. I ask everyone to pray for the officers who were shot and for every law enforcement officer working on the streets of Houston. We live in dangerous times, and it will take all of us working together to make our city safe."

Harris County Judge Lina Hidalgo said, "I am saddened and absolutely outraged over this latest attack on our police. Gun violence is out of control and weapons of war have NO place on our streets. I'm in touch with Mayor Turner and he has our full support for anything he or HPD needs."

Harris County Sheriff Ed Gonzalez said on Twitter, "Police put their lives on the line for our communities daily. This violence is unacceptable. Shooting at law enforcement officers is beyond concerning. I pray these officers make a full recovery & for the safety of officers across our county and nation."

Texas Governor Greg Abbott also released a statement saying, "The state of Texas grieves at the news of yet another violent attack on our law enforcement officers, this time on three members of the Houston Police Department who were shot this afternoon while serving their community. Violence against the police will never be tolerated in the Lone Star State. The State of Texas will ensure that the City of Houston and the Houston Police Department have the resources and support they need to ensure swift justice for the perpetrator. Please join Cecilia and me in praying for the officers who were shot and injured, as well as for the safety of all law enforcement who serve and protect our communities across the state."