FOX 26 Reporter Tiffany Justice spoke with some Astros fans who are ready for the World Series.

HOUSTON - Even if you can’t get your hands on a ticket to a World Series game, you can still catch some of the action at Minute Maid Park.

The Houston Astros are back in the World Series for the fourth time in six seasons, facing off against the Philadelphia Phillies.

RELATED: Astros in the World Series 2022: Here's when they'll play the Phillies

The best-of-seven series begins on Oct. 28, with the first two games in Houston. Tickets for those games are sold out and are going for hundreds and even thousands of dollars on resale websites. 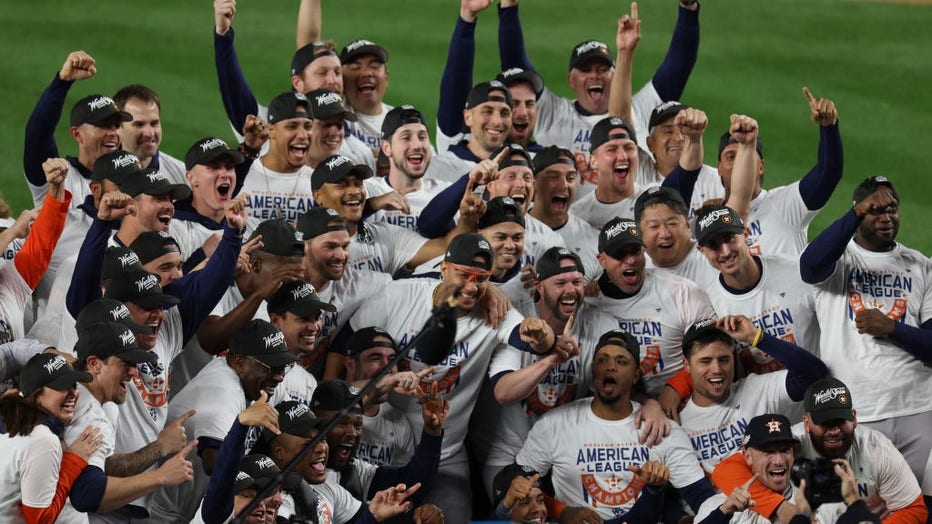 NEW YORK, NEW YORK - OCTOBER 23: The Houston Astros celebrate defeating the New York Yankees in game four of the American League Championship Series to advance to the World Series at Yankee Stadium on October 23, 2022 in the Bronx borough of New York

RELATED: World Series 2022 tickets for Astros vs Phillies games: Where to buy

The Astros will then hit the road for Games, 3, 4, and 5 (if necessary) in Philadelphia, and you can catch those games at Minute Maid Park.

Businesses ready to cash in during 2022 World Series

With the showdown between Houston and Philadelphia just days away, businesses around the city are gearing up for large crowds this weekend. FOX 26’s Natalie Hee went to Patterson Park in the Heights to see what their watch party plans were.

During road games, attend a watch party at Minute Maid Park and watch the game on the big screen while also enjoying the festivities around the ballpark.

To attend the watch parties on Oct. 31, Nov. 1, or Nov. 2 (if necessary), you will need to claim a $1 voucher. Proceeds benefit the Astros Foundation.

First pitch for all World Series games is at 7:03 p.m. CT. The watch parties at Minute Maid Park will begin at 5 p.m.

You can also watch all of the 2022 World Series games on FOX.