After a sweeping win against the Yankees in the ALCS, the Astros are heading to the World Series again. FOX 26 Sports Director Mark Berman shares more from the team after they celebrated their victory.

HOUSTON - The 2022 World Series matchup is set between the Houston Astros and the Philadelphia Phillies.

The Astros will be making their fourth World Series appearance in six seasons after sweeping the New York Yankees in the American League Championship Series.

The Phillies beat the San Diego Padres in Game 5 to win the National League Championship Series and return to the World Series for the first time since 2009.

The first two games will be played at Minute Maid Park before heading to Citizens Bank Park in Philadelphia for Games 3, 4 and 5, if necessary. The series will then return to Houston for Games 6 and 7, if they are needed.

The 2022 World Series will air on FOX and can also be streamed on MLB.TV. 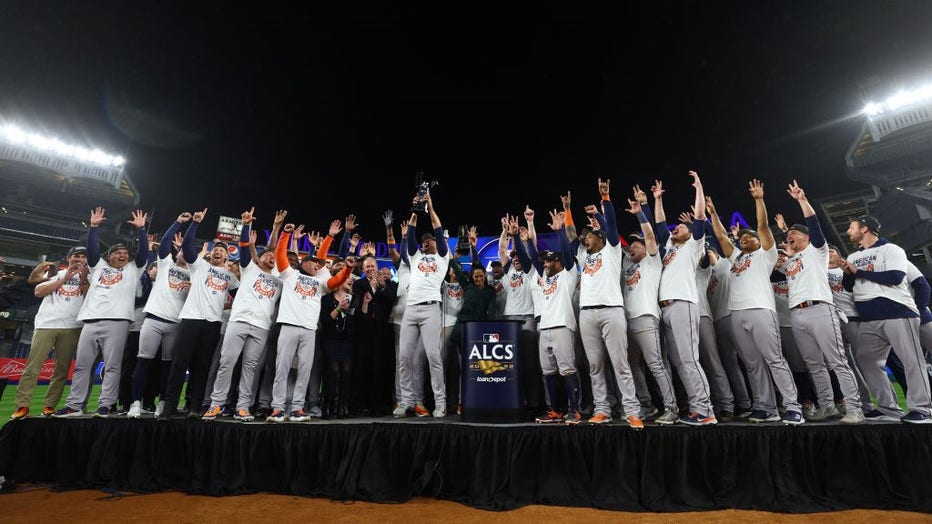 NEW YORK, NEW YORK - OCTOBER 23: The Houston Astros celebrate defeating the New York Yankees in game four of the American League Championship Series to advance to the World Series at Yankee Stadium on October 23, 2022 in the Bronx borough of New York

Tickets for the World Series games at Minute Maid Park are sold out on the MLB website. The website states that a limited number of additional seats could become available at a later time.

To check for tickets, visit https://www.mlb.com/astros/tickets/postseason

Some tickets are being listed on resale websites, but you can expect to pay hundreds or thousands of dollars and need to be careful not to get scammed.

As of Monday afternoon, the cheapest tickets for Game 1 on StubHub were standing-room-only tickets ranging from $468 - $526. The highest-priced ticket for that game was a Diamond Club level seat behind home plate for just over $13,000.

During the ALCS, Homeland Security Investigations Houston and the Houston Police Department cautioned the public to be careful when purchasing tickets from third parties.

They advise that you purchase tickets from official sources, and if you purchase from a secondary seller, stick with reputable companies and double-check the website’s guarantee.