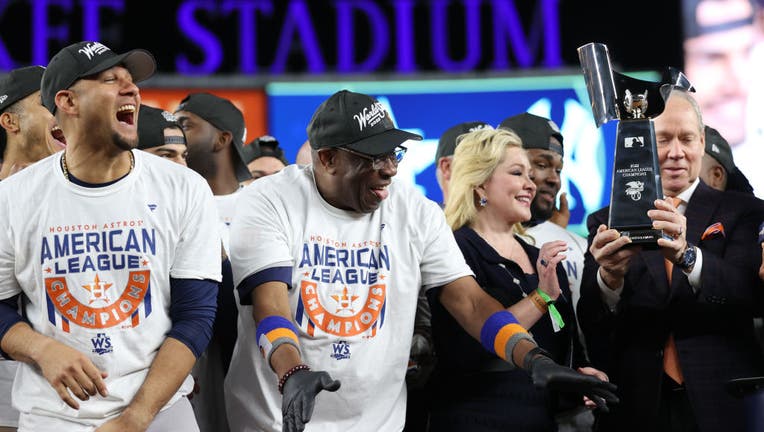 NEW YORK, NEW YORK - OCTOBER 23: Manager Dusty Baker Jr. #12 of the Houston Astros celebrates with his team after winning game four of the American League Championship Series against the New York Yankees to advance to the World Series at Yankee Stadi

NEW YORK (AP) - Yordan Alvarez and Alex Bregman delivered big hits and the Houston Astros advanced to the World Series again, finishing a four-game sweep of New York in the AL Championship Series with a 6-5 victory Sunday night aided by another defensive gaffe from the Yankees. 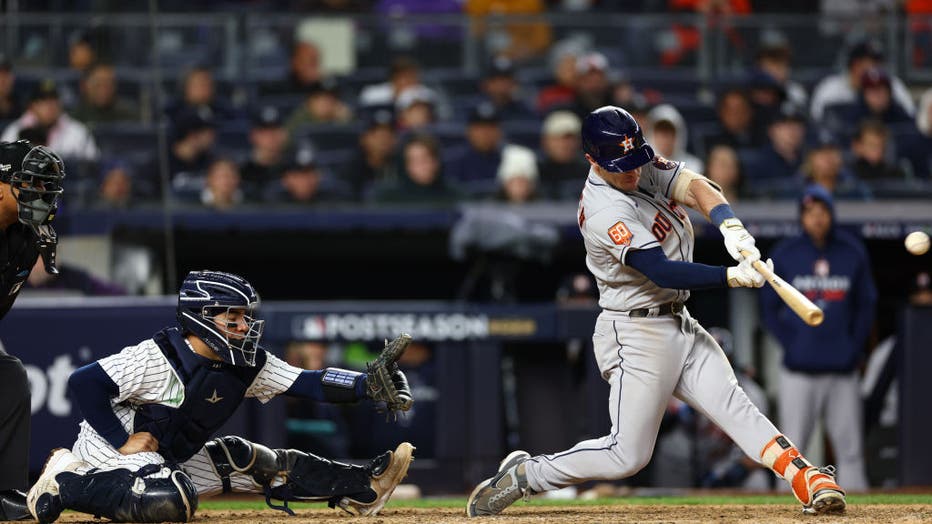 NEW YORK, NEW YORK - OCTOBER 23: Alex Bregman #2 of the Houston Astros hits an RBI single during the seventh inning against the New York Yankees in game four of the American League Championship Series at Yankee Stadium on October 23, 2022 in the Bron

Taking advantage of a costly error by second baseman Gleyber Torres to produce the go-ahead rally in the seventh inning, the Astros won their second consecutive pennant and fourth in six years. 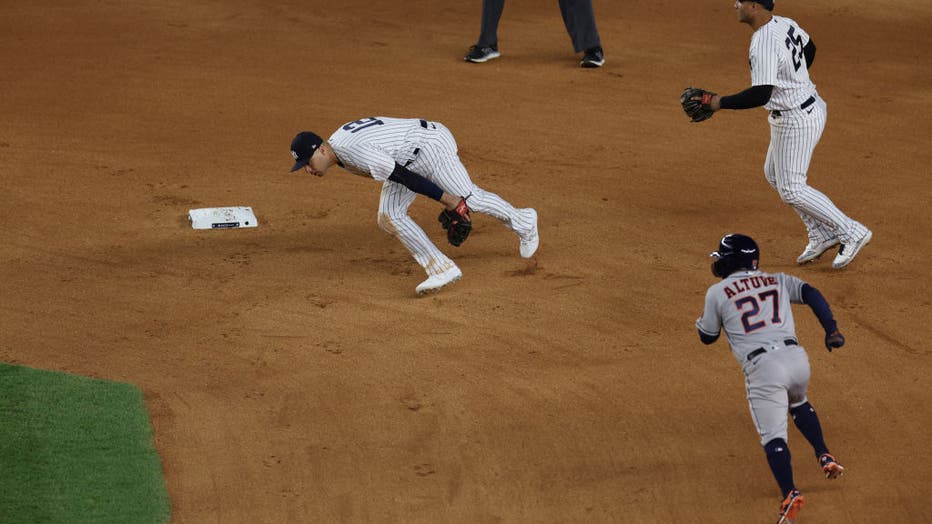 NEW YORK, NEW YORK - OCTOBER 23: Isiah Kiner-Falefa #12 of the New York Yankees is unable to field a ball hit by Jeremy Pena #3 of the Houston Astros during the seventh inning in game four of the American League Championship Series at Yankee Stadium

Houston will open the World Series at home Friday night against Bryce Harper and the wild-card Philadelphia Phillies, who beat San Diego earlier in the day to close out the best-of-seven NLCS in five games.

It was the first time both pennants were decided on the same day since 1992. After losing to Atlanta in last year's World Series, Houston earned the fifth pennant in franchise history and another chance at its second World Series championship. 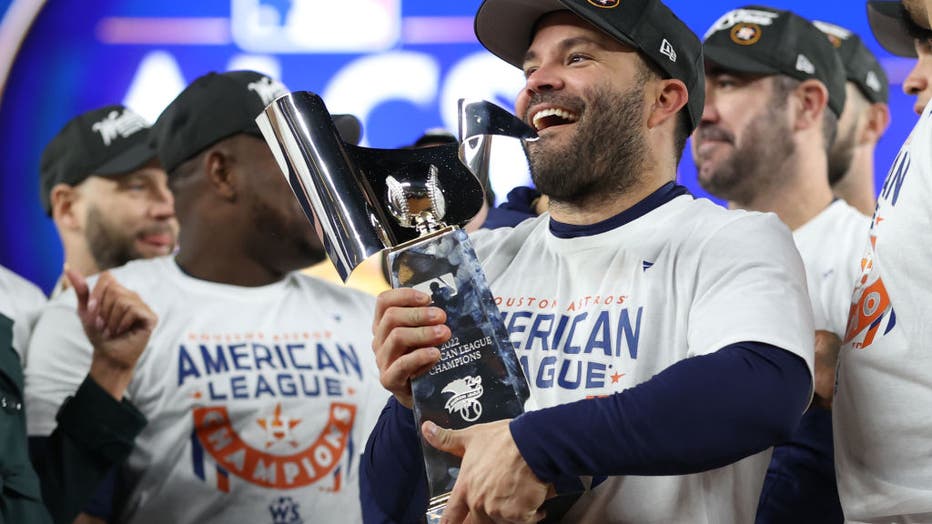 NEW YORK, NEW YORK - OCTOBER 23: Jose Altuve #27 of the Houston Astros celebrates defeating the New York Yankees in game four of the American League Championship Series to advance to the World Series at Yankee Stadium on October 23, 2022 in the Bronx

The team's 2017 title was tainted by a cheating scandal. With the playoffs expanded to 12 teams this year, the Phillies became the first third-place squad in baseball history to reach the World Series. Philadelphia went 87-75 during the regular season -- Bregman and the Astros finished 106-56 under manager Dusty Baker, seven games better than any other American League team. "Hey, these are the greatest guys I've ever been around," the 73-year-old Baker said in a post-game celebration. 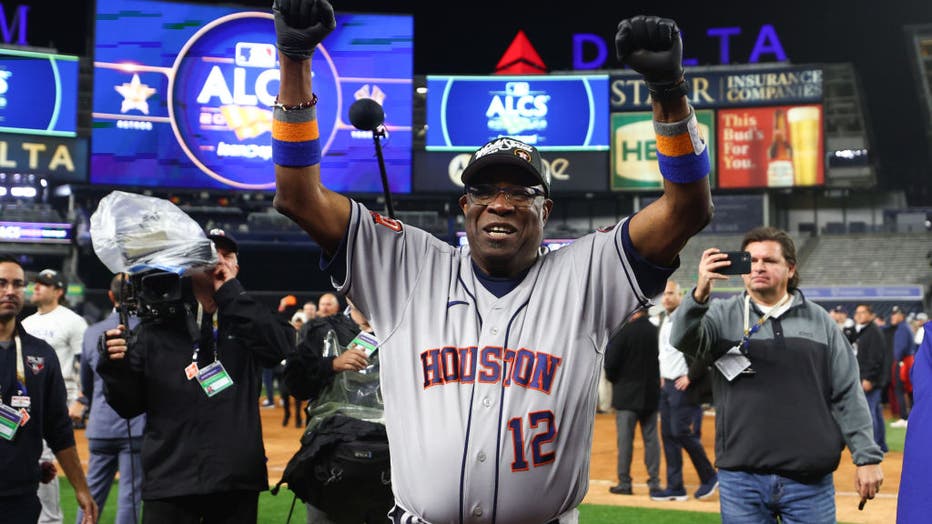 NEW YORK, NEW YORK - OCTOBER 23: Manager Dusty Baker Jr. #12 of the Houston Astros celebrates after winning game four of the American League Championship Series against the New York Yankees to advance to the World Series at Yankee Stadium on October

Back in the leadoff spot, Harrison Bader had three hits and scored three times for New York. He connected off winning pitcher Hector Neris for his fifth home run of these playoffs, giving the Yankees a 5-4 lead in the sixth.

They couldn't hold it. Pena hit what could have been an inning-ending double-play ball to Torres in the seventh. But his flip to second base went wide of shortstop Isiah Kiner-Falefa as the crowd of 46,545 groaned, and the Astros had two on.

Alvarez singled home the tying run on the next delivery from losing pitcher Jonathan Loaisiga, and Bregman put Houston ahead with an RBI single off Clay Holmes.

It was the sixth error of this postseason for the Yankees, who also gave the Astros a pivotal gift in Game 3. Chas McCormick hit an early two-run homer off New York ace Gerrit Cole after Bader, a Gold Glove outfielder, dropped a two-out fly when he nearly collided with Aaron Judge in right-center.

Bryan Abreu, Rafael Montero, and Ryan Pressly shut the door with perfect relief. Pressly retired Judge on a comebacker for his third save of the series, sending the Astros rushing out of the dugout for ecstatic hugs and handshakes on the infield.

Moments later, a throng of orange-clad Houston fans chanted "sweep! sweep!" behind their third base dugout in a mostly empty Yankee Stadium. 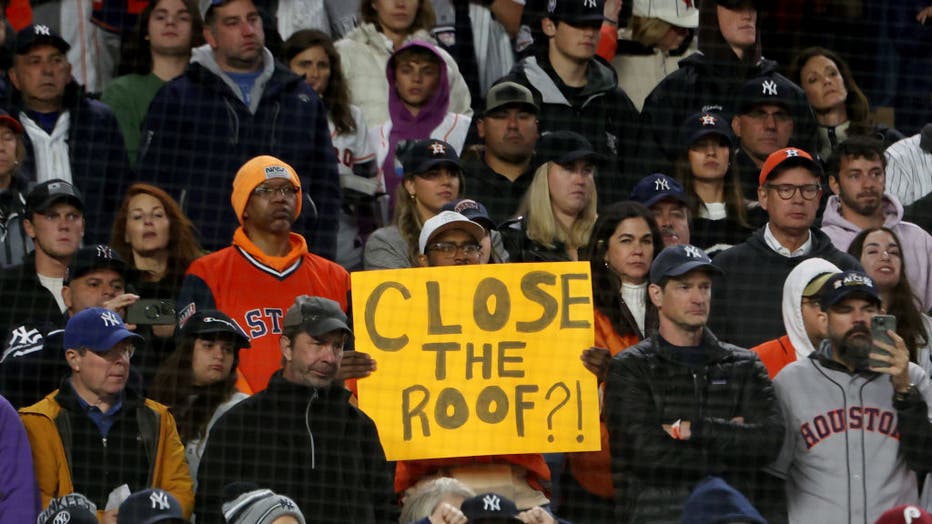 NEW YORK, NY - OCTOBER 23: A Houston Astros fan holds up a Close the Roof sign during Game 4 of the ALCS between the Houston Astros and the New York Yankees at Yankee Stadium on Sunday, October 23, 2022 in New York, New York. (Photo by Mary DeCicco/M

Handed an early 3-0 lead, Cortes walked No. 9 batter Martin Maldonado to start the third and fell behind 2-1 on slumping Jose Altuve. Something wasn't right. Yankees manager Aaron Boone and head athletic trainer Tim Lentych went to the mound for a quick check on Cortes, who initially remained in the game. 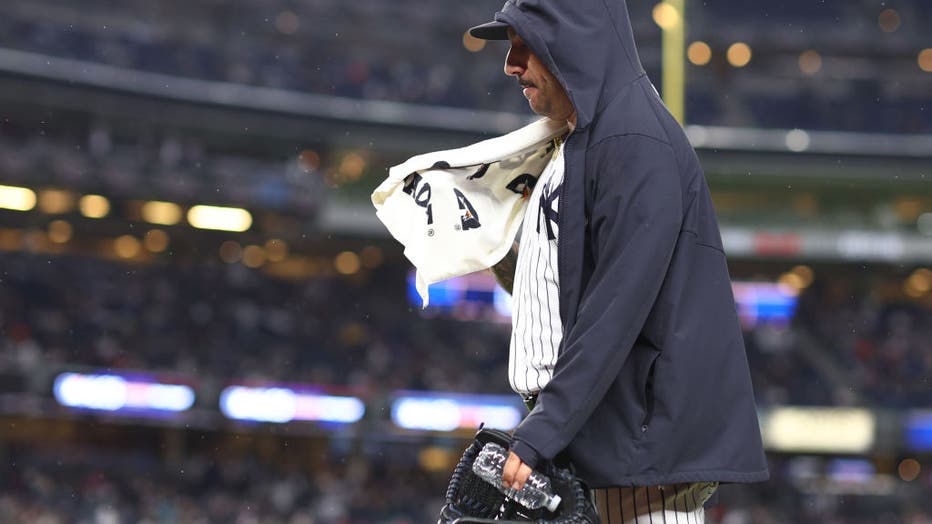 NEW YORK, NEW YORK - OCTOBER 23: Nestor Cortes #65 of the New York Yankees walks to the dugout before game four of the American League Championship Series against the Houston Astros at Yankee Stadium on October 23, 2022 in the Bronx borough of New Yo

But he walked Altuve, marking the first time the All-Star lefty issued consecutive free passes this season. And eight pitches after the mound visit, Pena launched a 3-1 slider into the left-field seats to tie it. That was it for an ailing Cortes, who exited with a left groin injury that he apparently reaggravated. He was sidelined from Aug. 22 through Sept. 7 with a strained left groin.

Alvarez doubled off Wandy Peralta and went to third when Peralta got nailed by Kyle Tucker's line drive that went for an infield single with one out. Yuli Gurriel bounced an RBI single through an open right side to put Houston ahead 4-3.

Needing a win to extend their season, the Yankees got off to a fast start in the first inning following an 84-minute delay due to a threat of rain. Giancarlo Stanton laced an RBI single off starter Lance McCullers Jr., and Torres blooped a run-scoring single into center. That ended New York's scoreless streak at 14 innings. Houston had gone 19 innings without permitting an earned run.

Anthony Rizzo's two-out RBI double made it 3-0 in the second, but Stanton struck out with runners at second and third. Rizzo also delivered a two-out RBI single that tied it 4-all in the fourth. McCullers, who closed out the Yankees with 24 straight curveballs in Game 7 of the 2017 ALCS, lasted five innings. He gave up four runs -- three earned -- and eight hits. 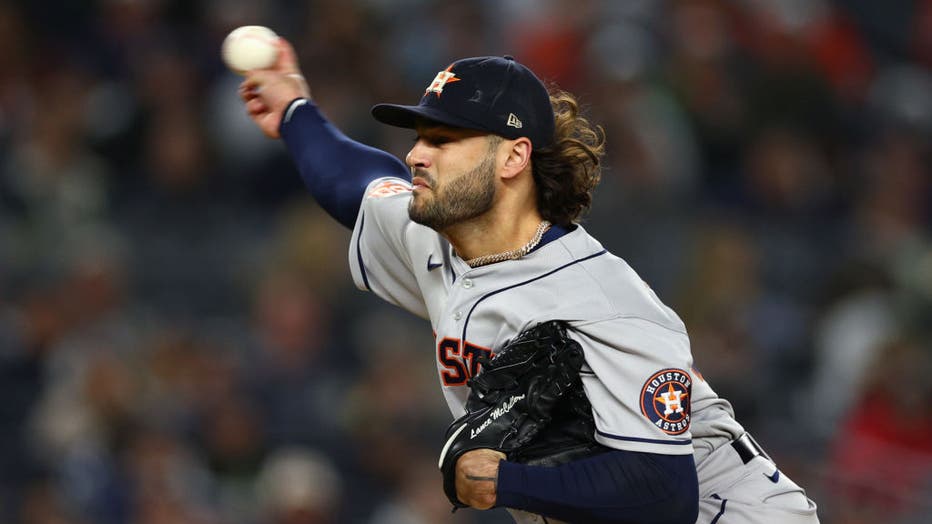 NEW YORK, NEW YORK - OCTOBER 23: Lance McCullers Jr. #43 of the Houston Astros pitches in the first inning in game four of the American League Championship Series against the New York Yankees at Yankee Stadium on October 23, 2022 in the Bronx borough

Third base coach Gary Pettis is expected to rejoin the Astros when they return to Houston. He's been out with an illness. "He's doing great. He's doing a lot better," Baker said. First base coach Omar Lopez has been filling in for Pettis, with quality control coach Dan Firova coaching first.

Astros: Justin Verlander is likely to start the World Series opener. The 39-year-old righty went 18-4 with a 1.75 ERA this season in a hugely successful comeback from Tommy John surgery, making him a favorite to win his third Cy Young Award. He was hit hard in the Division Series opener against Seattle, then struck out 11 in six innings of one-run ball to win Game 1 of the ALCS. He is 0-6 in seven World Series starts.

This article will be updated as the game progresses.