What does Roe v. Wade overturning mean for Texans?

Texas is among more than a dozen states to recently pass a "trigger law" meaning the Supreme Court’s decision to reverse Roe v. Wade immediately triggers a ban and abortion will be illegal in Texas in 30 days.

The U.S. Supreme Court overturned the landmark Roe v. Wade ruling on Friday, stripping away the nation’s constitutional protections for abortion that had stood for nearly a half-century.

The decision is expected to lead to abortion bans in roughly half the nation’s states – including Texas.

"The idea that states are free now to regulate abortion indicates that in the future where you live could very well have a strong influence on the rights you enjoy," says Rice University Professor of Political Science Dr. Paul Brace.

Is all abortion now illegal in Texas?

Currently, Texas bans abortions after about six weeks of pregnancy, which is enforced by private citizens who can sue anyone who "aids or abets" in an abortion.

Texas, which is where Roe v. Wade case began, has a pre-Roe law that can potentially be enforced with the overturning of the nationwide legislation. The pre-1973 statute forbids abortion except when necessary to save the life of the mother.

"That has not been repealed, and they're still on the books," Brace says.

And in 2021, Texas became one of 13 states that has a so-called "trigger law." So the overturning of Roe v. Wade now triggers the Human Life Protection Act passed last year. Thirty days after the Supreme Court’s ruling to overturn Roe v. Wade, Texas will ban all abortions from the moment of fertilization.

What are the exceptions?

A licensed physician can perform an abortion with narrow exceptions only to save the life of a pregnant patient or prevent "substantial impairment of major bodily function."

The law calls for the physician to attempt the abortion in a manner that "provides the best opportunity for the unborn child to survive" unless it puts the patient’s life at greater risk or at serious risk of impairment to major bodily function. 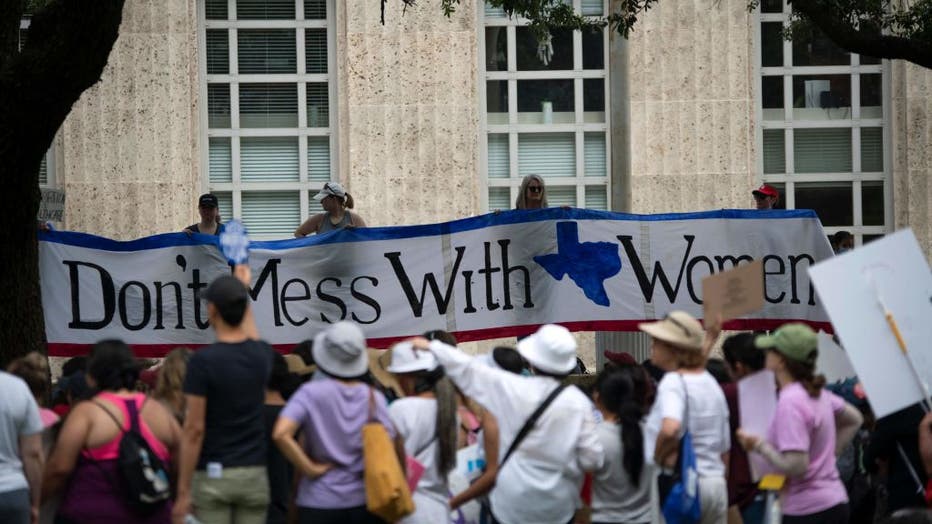 Demonstrators gather outside Houston's City Hall during a Bans Off Our Bodies rally on May 14, 2022. (Photo by Mark Felix / AFP) (Photo by MARK FELIX/AFP via Getty Images)

Anyone who attempts to perform an abortion in violation of the law faces a second-degree felony. It is a first-degree felony if "an unborn child dies as a result of the offense".

"It takes the performing of abortion in Texas, it makes it a felony, and doctors who perform an abortion can face life in prison and fines up to $100,000," Brace explains.

FOX 26 speaks with Dallas appellate attorney David Coale to learn more about what it could mean legally for overturning Roe v. Wade.

Anyone who violates the law is subject to a civil penalty of $100,000. Physicians and health care professionals can also lose their licenses.

Can Texans still take contraceptives or Plan B?

In its ruling, the Supreme Court made it clear that Americans still have the constitutional right to access contraceptives. Texans can still access birth control and emergency contraceptives, which are commonly referred to as Plan B or the morning-after pill.

Contraceptives are different from abortion-inducing drugs, which would be illegal under the ban.

Now that the Supreme Court has overturned Roe v. Wade We want to go over some of the legal reasons behind this decision. Emily Berman teaches constitutional law at the University of Houston Law Center and breaks it all down for us.

A Texas law banning most abortions after about six weeks — before many women know they are pregnant — took effect in September and makes no exceptions in cases of rape or incest.

Because of how Republicans wrote the law, which is enforceable only through lawsuits filed by private citizens against doctors or anyone who helps a woman obtain an abortion, Texas essentially outmaneuvered decades of Supreme Court precedent governing a women’s constitutional right to an abortion.

State data shows the number of abortions performed in Texas’ roughly two dozen clinics fell by half in the five months after the law came into effect compared to the same period a year earlier.

Texans may have to travel hundreds of miles for an abortion

Many Texas women have already traveled out of state for abortions since the law took effect. They will likely have to travel much farther now that Roe v. Wade has been overturned, triggering bans in more states.

DETAILS: With the end of Roe, Texans will have to travel long distances for legal abortions

"People who can afford an airplane ticket and a hotel room in a state where abortions are legal will still have access to abortions. For financially challenged women though, this definitely has an unequal impact based on financial means," says Dr. Brace.

Of the states that directly share a border with Texas, New Mexico is the only one where abortion will remain legal after the ruling. In 2021, state lawmakers repealed a dormant 1969 statute that outlawed most abortion procedures as felonies, thus ensuring access to abortion even after the federal court rolled back guarantees. Albuquerque is home to one of only a few independent clinics in the country that perform abortions in the third trimester without conditions. An abortion clinic in Santa Teresa, New Mexico, is just a mile from the state line with Texas and caters to patients from El Paso, western Texas and Arizona.

STATE BY STATE: Where abortion will be illegal after Supreme Court Dobbs v. Jackson ruling

Colorado could also see a surge in out-of-state patients. Colorado’s health department reports there were 11,580 abortions in the state in 2021; of those 14% were for non-residents. More than 900 of those non-residents were from Texas, Wyoming and Nebraska.

A number of major companies have announced plans to pay for travel for employees seeking abortions. However, Dr. Brace says traveling to a state where the procedure is legal to get an abortion may not be an option for long.

"States are trying to figure out ways to criminalize that behavior," he said.

Some Republican lawmakers are already working on ways to punish companies that help their Texas-based employees get abortions elsewhere, although it’s unclear how much support that idea will have when the Legislature returns in 2023.

The Associated Press and The Texas Tribune contributed to this report.