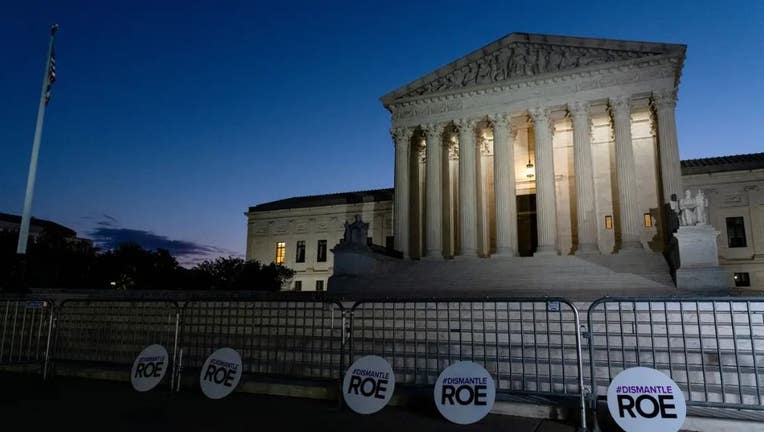 Signs reading "Dismantle Roe" are placed along a barrier surrounding the Supreme Court in Washington D.C., on Nov. 1, 2021. (Credit: Eric Lee for The Texas Tribune)

The U.S. Supreme Court ruled Friday to overturn Roe v. Wade, eliminating the constitutional protection for abortion and allowing states to set their own laws regulating the procedure. This represents one of the most significant judicial reversals in a generation and is expected to have far-reaching consequences for all Texans.

Texas will ban all abortions from the moment of fertilization, starting 30 days after the ruling, with narrow exceptions only to save the life of a pregnant patient or prevent "substantial impairment of major bodily function."

This ruling will radically change the reproductive health care landscape in Texas and the entire nation, where more than half of all states are expected to essentially ban abortion in the coming months.

Most of Texas’ neighboring states are also expected to outlaw abortion as a result of this ruling, with one exception: New Mexico. As the sole outlier in the region, New Mexico is expected to become a haven for Texans seeking abortions. The state currently has no significant restrictions and no plans to limit access to the procedure.

Friday’s ruling represents a victory nearly five decades in the making for Texas’ anti-abortion advocates, who have played an outsized role in the national effort to overturn Roe v. Wade.

It also represents a crushing blow to the state’s abortion providers, who have fought to maintain abortion access in Texas amid a nearly endless parade of restrictions, limitations and political attacks.

Before it became one of the most well-known Supreme Court cases in the country, Roe v. Wade was just a Texas lawsuit.

More than five decades ago, a woman identified in the legal filings as Jane Roe, later revealed to be Norma McCorvey, wanted an abortion. But under Texas’ laws at the time, it was a crime to perform or "furnish the means for procuring" an abortion.

Two young female lawyers, Linda Coffee and Sarah Weddington, saw an opportunity to use McCorvey’s case to challenge Texas’ abortion law more broadly. They filed a suit against Dallas County prosecutor Henry Wade, who would be the one responsible for bringing charges against anyone who violated the abortion law.

The case went all the way to the U.S. Supreme Court, where in 1973 Justice Harry Blackmun shocked the nation with a ruling that blocked not just Texas’ abortion laws from being enforced, but all state laws that banned abortion early in pregnancy.

Blackmun agreed with Coffee and Weddington’s argument that the right to privacy in the U.S. Constitution extended to a woman’s right to choose to have an abortion. That right to privacy must be balanced with the state’s interest in the "potentiality of human life," a balance that shifted in the state’s favor the further along a woman was into her pregnancy.

This ruling did little to settle the abortion debate in the United States, instead kicking off nearly five decades of anti-abortion activism and legal challenges seeking to overturn the decision.

Texas, the birthplace of Roe v. Wade, has led many of those legal challenges, including a landmark 2016 U.S. Supreme Court decision that upheld Roe v. Wade and the 1992 ruling in Planned Parenthood v. Casey.

But the Supreme Court has become much more conservative in recent years, thanks to three appointments by former President Donald J. Trump.

In late 2021, the court declined to block a Texas law that banned abortions after about six weeks of pregnancy through a novel enforcement mechanism that empowers private citizens to sue anyone who "aids or abets" in an abortion.

That law remains in effect and will not be immediately impacted by Friday’s ruling.

In December, the court heard arguments in Dobbs v. Jackson, a challenge to Mississippi’s law banning abortions after 15 weeks of pregnancy. Rather than considering just the law itself, the court agreed to consider the question of whether Roe v. Wade should be overturned — and today’s ruling gave the answer.

But if Roe v. Wade did little to end the debate about abortion in the United States, Dobbs v. Jackson is not expected to settle the question either.

Health care providers are worrying about how these laws will impact their ability to provide care for high-risk pregnancies or people experiencing miscarriages. Some local district attorneys have said that they won’t prosecute abortion cases in their jurisdictions.

Republican lawmakers have made it clear that they plan to use every tool in their arsenal to ensure that the state’s laws are being enforced, likely sparking legal challenges as they do so.

One such challenge is already looming, as state Rep. Briscoe Cain, a Republican from Deer Park, has made it clear he intends to target nonprofit advocacy groups that help pregnant patients pay for abortions.

Under the current law banning abortions after about six weeks of pregnancy, these abortion funds have helped hundreds of pregnant people leave the state to get an abortion. They’ve paid for travel, lodging, child care and the procedure itself, and they’re preparing for a surge in demand now that abortion is further restricted.

But Cain, an anti-abortion legislator, has issued cease-and-desist letters to these groups, warning that their work may be criminalized under the state laws that were on the books before 1973.

That argument didn’t carry much weight when Roe v. Wade was in effect. Now, legal experts say this may represent the first of many legal questions that will need to be sorted out by the courts as the state begins to navigate an entirely new reproductive health care landscape.

More from the Texas Tribune.