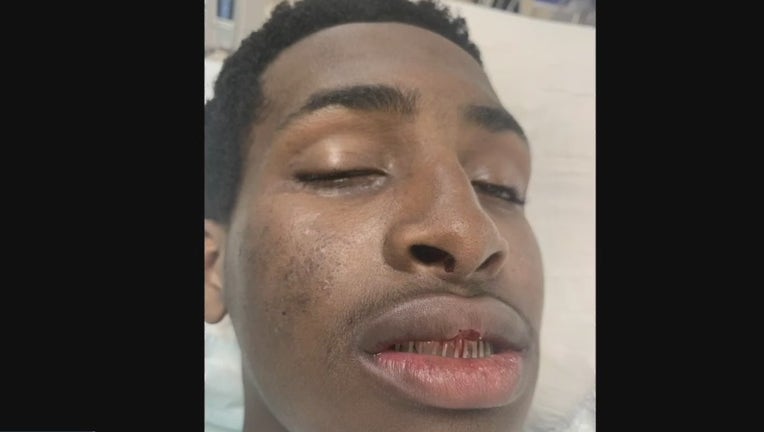 HOUSTON - Houston police are looking for the man accused of punching a teen in the face outside a Midtown bar.

Graphic images taken from a hospital room show the damage done to Damarion Ziegler’s jaw. According to the teen, the alleged attack was unprovoked.

The incident happened on April 18 around 5 p.m., outside The Brass Tap at Travis and Holman.

"I was in pain," said Ziegler. "I didn’t know what happened. The dude broke both sides of my jaw."

According to Ziegler, he had been cycling down Travis Street on his bike when he stopped for a red light at Holman. As he waited, Ziegler says a man walked out of a nearby bar called The Brass Tap.

"The dude said, do I have a problem? I said no," recalled Ziegler. "I pulled my phone out to call my friend Trey. He didn’t answer. Next thing I know, I woke up in the hospital."

The teen’s jaw was broken in two places. Ziegler believes he was sucker punched and knocked out by the stranger.

"Imagine you’re at home with your other children," said Alberta Madison, the teen’s mother. "Houston fire department calls with your son in the back of an ambulance.  He’s stable, but he can’t talk."

Houston police tell FOX 26 they’re investigating what happened and checking nearby surveillance video. So far, no suspects have been named.

"I feel like right now in 2022, people don’t care," said Madison. "They don’t give no cares. I think they assumed he was a regular Black kid rather than being something.  To me honestly, the era we’re in, I feel like he was targeted. That’s my opinion. What normal person says, I’m going to attack someone in broad daylight, and nobody says nothing."

A spokesperson from The Brass Tap provided a written statement about the incident that took place outside their business: "We are saddened by the events that transpired and the injuries suffered by this young man. As this did not happen at our establishment, we do not have any further information to provide. We have and will continue to cooperate with HPD and any others involving this investigation. We wish a speedy recovery to the victim."

Ziegler spoke with us with his jaw wired shut. According to his mother, he is in need of surgery to help heal his broken jaw.

If you have any information relating to this case, you’re urged to contact HPD.