As another year passes by, the Santa Fe community continues to mourn and honor the 10 lives lost on May 18, 2018, when a gunman stormed into Santa Fe High School and shot 23 people, killing 10 of them.

SANTA FE, Texas - As another year passes by, the Santa Fe community continues to mourn and honor the 10 lives lost on May 18, 2018. Four years ago on this day, a gunman stormed into Santa Fe High School and shot 23 people, killing 10 of them.

Four years later, it's all new faces. This is the first year, that none of the kids were physically at the high school during the deadly mass shooting in 2018.

School officials are treating Wednesday as a regular day of class. However, a moment of silence will be through various parts of the day, to honor the Santa Fe Fallen Ten. 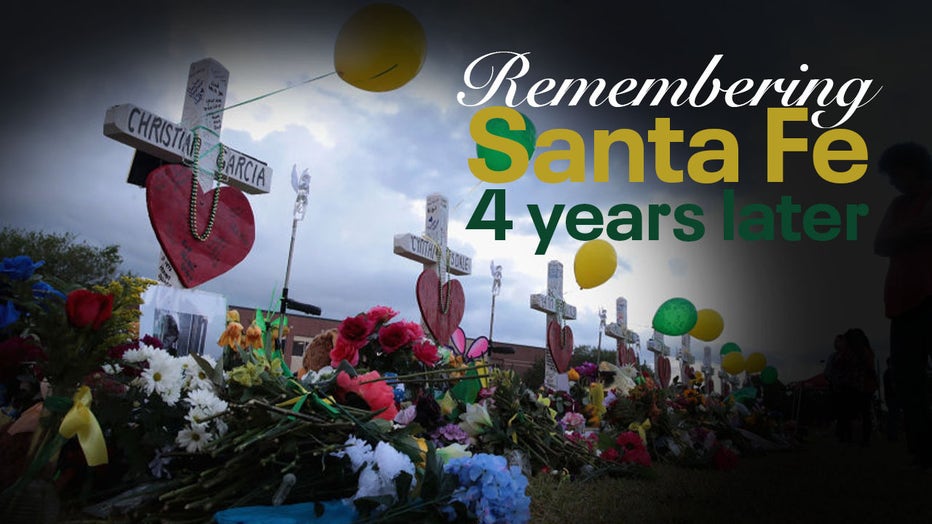 A dedication was held at 3:30 p.m. by The Unfillable Chair, seated at the front edge of campus.

For Rhonda Hart, the pain gets a little easier to manage with time.

"It seems like four years has just flown by, but at the same time it feels like it’s gone really slow. You eventually get used to it, but it never goes away. I credit my therapist a lot and my entire mental health care team," said Hart.

TIMELINE: What happened that horrific day

Hart’s 14-year-old daughter, Kimberly Vaughan, was one of the 10 people murdered in an art classroom. Kimberly would’ve been 19 this year and a freshman in a college.

Galveston County District Attorney Jack Roady said, "Based on the testimony of medical experts, the court has ruled that the defendant is not competent to stand trial. The defendant remains in the custody of the North Texas State Hospital system and is being treated to restore his competency. Our office remains committed to prosecuting the defendant, and we are ready to do so as soon as the court rules that he is competent."

Hart worries the families may never see the inside of a courtroom.

"I don’t expect that we will ever go to trial. In my head, no. I think he will remain mentally unwell for a long time," Hart said.

"Unfortunately, there is that possibility. We’ve seen cases in the past that have gone on for a long time until the defendant regains competency," said legal analyst, Casey Garrett.

While waiting for a trial may be extremely frustrating for the victims' families, Garrett says it's all part of a fair legal process.

"Some people might try to argue that this is just a legal maneuver by defense attorneys to delay the trial. It’s simply not true. This is an independent finding by psychiatric doctors. This isn’t a lawyer just saying he’s incompetent, we want a delay. No. These are doctors that do this for a living," Garrett said.

"No judge is going to start a trial with a mentally incompetent defendant, so until he regains, the case won’t go to trial unfortunately," Garrett continued.

As for Hart, she’ll be hugging Kimberly’s younger brother, Tyler, a little tighter this summer. Tyler is an 8th grader who’ll be heading to high school in the fall.

Sante Fe ISD officials said counselors will be available on campus for anyone who needs them.