With Beta moving away from Houston, we’ll transition to a drier and calmer weather pattern. There may be a few scattered showers today, but most will be light and a drier northwest breeze will keep temperatures in the upper 70s. The rest of the week and this weekend all look great With sunshine, lows in the upper 60s and highs in the upper 80s.

HOUSTON - The remnants of Beta are moving out to the east of Houston on Wednesday morning after bringing more than 14 inches of rain to some parts of southeast Texas.

Beta made landfall as a tropical storm on Monday night near the southern end of the Matagorda Bay Peninsula. It weakened as it moved northeast along the Texas coast on Tuesday.

A few scattered showers are possible in the Houston area on Wednesday, but most will be light and a drier northwest breeze will keep temperatures in the upper 70s.

Beta is expected to continue moving northeast during the next 48 hours as it slowly weakens.

The National Hurricane Center says rainfall totals of 2 to 5 inches are expected east into the Lower Mississippi Valley, portions of the Tennessee Valley, and the southern Appalachians through the end of the week. 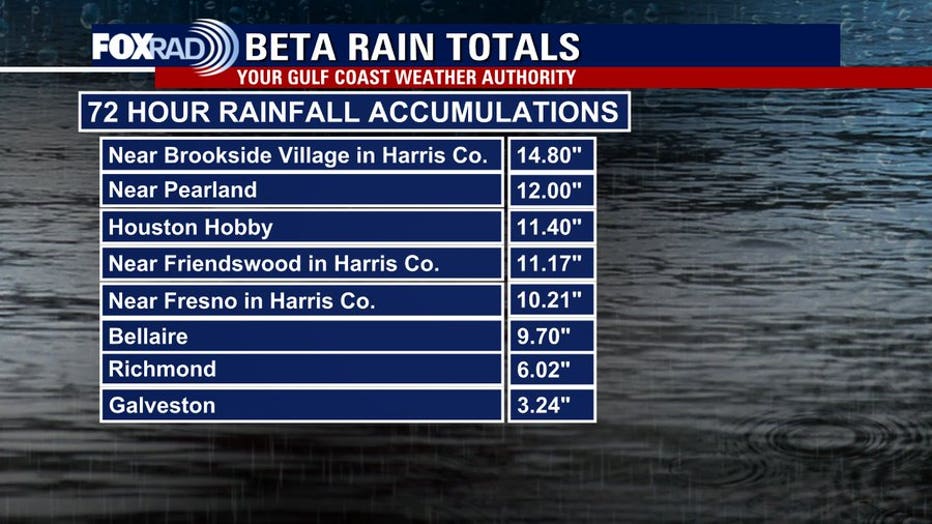 Preliminary rain totals from Beta in the greater Houston area.

On Tuesday, dozens of high water locations were reported on Houston area roadways. Houston Mayor Sylvester Turner said more than 70 barricades were up, and he encouraged the public to avoid driving if possible. The Houston Police Department and Fire Department reported more than 90 rescues, many of them motorists who tried to drive through flooded streets.

Some high water locations remain on Wednesday morning, but SH 288 has reopened in both directions. Northbound and southbound lanes were shutdown on Tuesday after the highway flooded. Some vehicles were seen stalled in the water.

Why did SH288 flood, after nearly a billion dollars in reconstruction and improvement

TXDOT says there's a simple explanation. Stormwater is designed to drain from 288 to nearby Brays Bayou, on its way to the Galveston Bay and the Gulf of Mexico.

On the border of Houston and Pearland, volunteers spent Tuesday helping some residents evacuate after streets became undrivable in the floodwaters. Dozens of lifted trucks swarmed a residential neighborhood at Monroe Road and Lettie Street where residents were seen wading out on foot for fear of flooding their cars. Truck drivers were seen offering residents rides out of the floodwaters.

In Houston, city officials reported that more than 500,000 gallons of domestic wastewater spilled at five locations due to "intense, sustained, rainfall of greater than 10 inches in the last 24 hours." Officials emphasized that those who receive water from the city of Houston, did not need to boil their drinking water.

MORE: More than 500k gallons of wastewater spilled in Houston due to Beta, officials say