Houston Mayor Sylvester Turner, Fire Chief Samuel Pena, Police Chief Art Acevedo and other city leaders hold a press conference to provide an update on weather conditions in the city as Beta moves through the area.

HOUSTON - Houston leaders are urging the public to avoid driving unless necessary after heavy rains from Beta left roadways flooded.

“We’ve said it over and over again, I want to remind people, do not try to drive through this high water,” Mayor Turner said. “You’re not helping yourself. You could possibly drown. If not, at bare minimum, you could stall and you’re going to just create problems for yourself. And then the first responders and others are going to be out there doing our best to rescue you.” 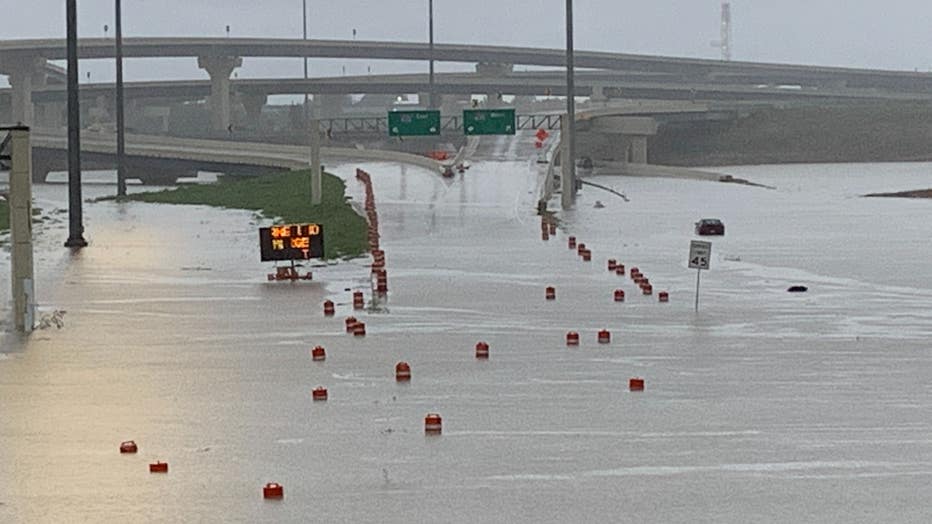 The roadway at 288 and Holly Hall was flooded Tuesday morning after rains from Beta. (FOX 26 Houston)

Houston Fire Department Chief Samuel Pena said the department had more than 60 rescues and evacuations since 8 p.m. Monday. He asked drivers to heed the warnings and not drive around barricades

“We want to remind people, we even have a slogan that rhymes, turn around, don’t drown. We’ve mentioned this before. It’s not just a slogan, it is going to save lives,” Chief Pena said. “As I mentioned, over 60 rescues and evacuations, they’ve all been street level flooding as a result of people trying to drive through flooded streets.”

Houston Police Chief Art Acevedo reported 31 rescues. He said 24 cars had been towed because of the flooding, but he expects that number to increase.

Just off the Southwest Freeway (Hwy 59) at Bellfort FOX 26 reporter Chelsea Edwards reports on high water roadways and the importance of staying off the road this morning as much as possible.

While several roadways were remained flooded Tuesday morning, Mayor Turner said there were no reports through 311 of structural flooding.

“If anyone has taken on wind and water, please let us know. We would like to know that,” Mayor Turner said. “But we haven’t gotten any reports of structural flooding, which is good. And my hope is over the next 24 hours, that will remain the case. But that will depend on Mother Nature.”

Beta made landfall near the southern end of the Matagorda Bay Peninsula late Monday night as a tropical storm. It was downgraded to a tropical depression on Tuesday morning.

The tropical depression is now moving northeast. As Beta has now turned, it will slowly ride along the Texas coastline, likely staying inland as the rain bands associated with Beta continue to bring heavy rain over parts of Texas.