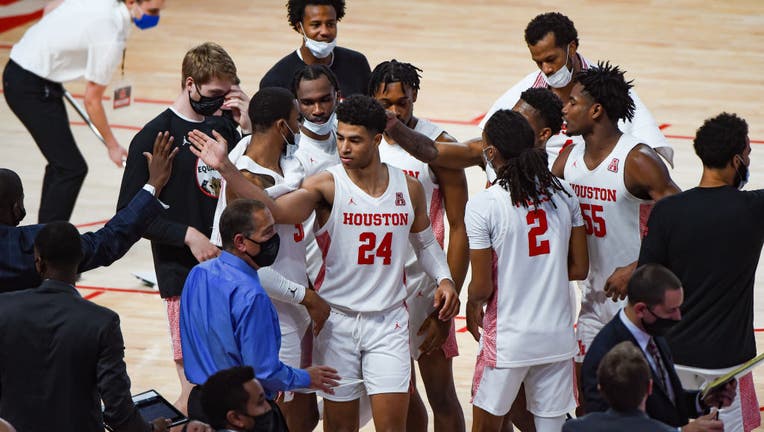 FILE: Houston Cougars guard Quentin Grimes (24) is congratulated during a timeout after lighting up the court with 17 first half points during the men's basketball game between Boise State Broncos and Houston Cougars at the Fertitta Center on Novembe (Photo by Ken Murray/Icon Sportswire via Getty Images)

HOUSTON - University of Houston men’s basketball coach Kelvin Sampson announced that every player on the team tested positive for the coronavirus at some time since this summer.

On Sunday, Houston is expected to play Alcorn State but the Cougars are expected to miss several players.

Houston hasn’t played in a game since Dec. 5, and over the last few days, the team has been practicing with just six players. Sampson thinks two or three players will be cleared in time for Sunday’s matchup, which will give the team eight or nine players for the game.

"The last time that I saw these kids in a game was November 29," Sampson said during a news conference with reporters. "This is unprecedented, man."

Sampson and his son, assistant coach Kellen Sampson, both missed Houston’s Dec. 5 game against the University of South Carolina because of COVID-19 concerns and contract tracing protocols. Two days later, Houston stopped all of its basketball activities to try and get the virus under control.