HOUSTON - The extremely active 2020 Atlantic hurricane season is showing no signs of slowing down as the National Hurricane Center continues to monitor two tropical storms and one tropical wave in the Atlantic basin. And yeah, it's November 11th!

With Theta being named on Monday, November 9th, this season surpassed 2005 to become the most active hurricane season in recorded history. To date, 29 names have been used pushing this season deeper into the Greek alphabet. In other words, the last time we witnessed this many storms was…never. 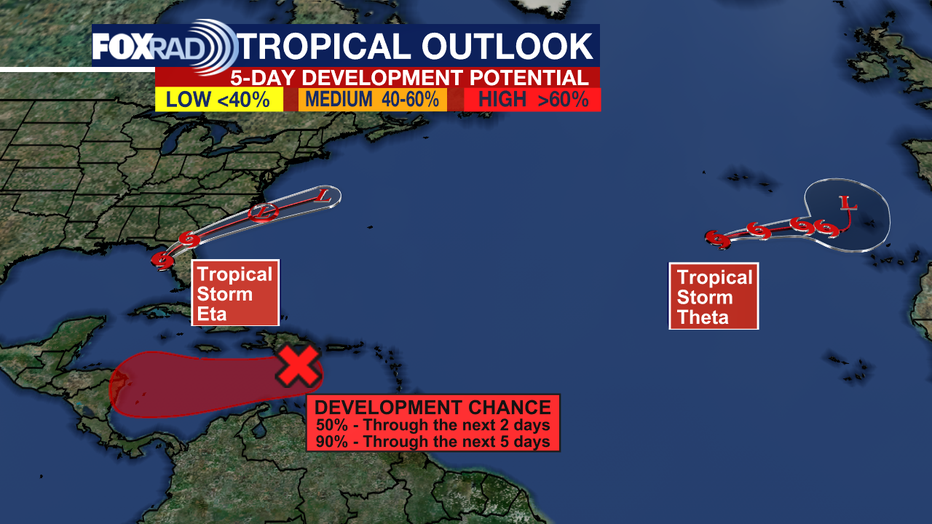 The only storm posing an imminent threat to the United States is tropical storm Eta, which is expected to slowly weaken as it nears a landfall north of Tampa. Eta’s impacts have already largely been felt, from Central America where Eta inundated portions of Nicaragua and Honduras with a few feet of rain. Eta then made another landfall in Cuba and the Florida Keys before spending the last couple of days meandering in the Gulf of Mexico.

Then we have Theta. Aside from creating waves as the 29th named storm in the Atlantic basin, Theta is posing few, if any, problems to land. It’s located in the eastern Atlantic, near the Azores. The official forecast has Theta eventually becoming a post-tropical storm by Monday.

So how will this season wrap up? Officially, the Atlantic hurricane season ends on November 30th, but we can still see tropical systems develop after the season ends. One area to keep an eye on is in the east-central Caribbean. The National Hurricane Center has highlighted this region, saying there’s an 90% chance that a tropical system could form over the next five days. If something does develop, possibly by the weekend, the next name would be Iota. Regardless of development, this disorganized area of showers and storms is expected to bring widespread rain to the Virgin Islands, Puerto Rico, and portions of Hispaniola.