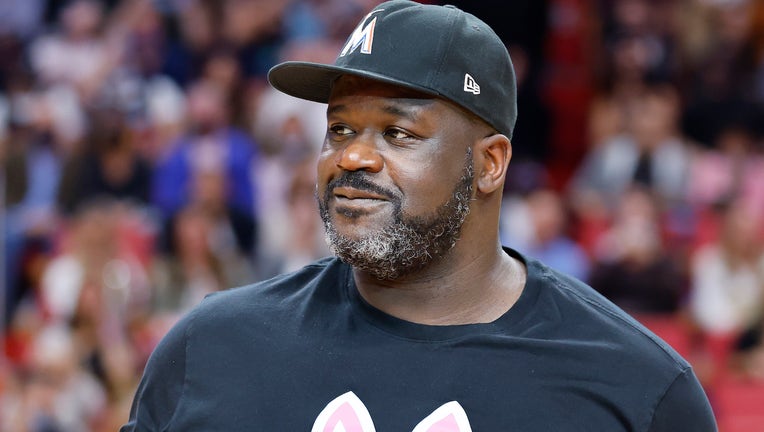 MIAMI, FLORIDA - JANUARY 15: Former Miami Heat player Shaquille O'Neal looks on during the game between the Miami Heat and the Philadelphia 76ers at FTX Arena on January 15, 2022 in Miami, Florida. NOTE TO USER: User expressly acknowledges and agrees

FOX NEWS - Shaquille O’Neal opened up about his thoughts on mandated COVID-19 vaccination policies, disagreeing with the notion that people should be forced to get the jab.

O’Neal, the Basketball Hall of Famer who won NBA championships with the Los Angeles Lakers and Miami Heat during his career, encouraged his listeners on "The Big Podcast with Shaq" to "be safe and "take care of your family." But he disagreed with forcing those people who don’t want it to get it.

"But it’s just, people don’t want to take it, and you shouldn’t be forced to take something you don’t want," he said.

O’Neal and his co-hosts Nischelle Turner and Anthony "Spice" Adams spoke about the New York nurses who were accused of making more than $1 million over fake vaccine cards. O’Neal said the two shouldn’t be sent to jail and gave Turner a hypothetical scenario regarding her work on "Entertainment Tonight."

O’Neal and Turner debated whether it was fair for a private company to dismiss someone who doesn’t receive the COVD-19 vaccine. The former center suggested a worker shouldn’t have to make the decision to get vaccinated if it was "going against (their) morals."

Turner said she disagreed with O’Neal and said if a worker doesn’t want to comply with the company rules then there’s the door.

"I’m with you on the rules because I’m a rules guy," O’Neal said. "But I do feel sympathetic towards people who have to make that kind of decision."

Turner replied: "I don’t. Not when you’re putting other people at risk."

O’Neal was very critical of Brooklyn Nets star Kyrie Irving for refusing to get vaccinated. The legendary player told USA Today in October that "sometimes you have to be selfless."

"The day I decided it wasn’t all about me and it’s about us is the day I started winning and really started dominating," he said. "I understand the issues and all that. But I took the vaccine because I’m not trying to get my mother sick, or my sister or my brother or people around me. I know people say, ‘The vaccine came too fast, and is it healthy?’ To each his own. But sometimes you have to think about the overall picture, and you have to think about more than yourself."