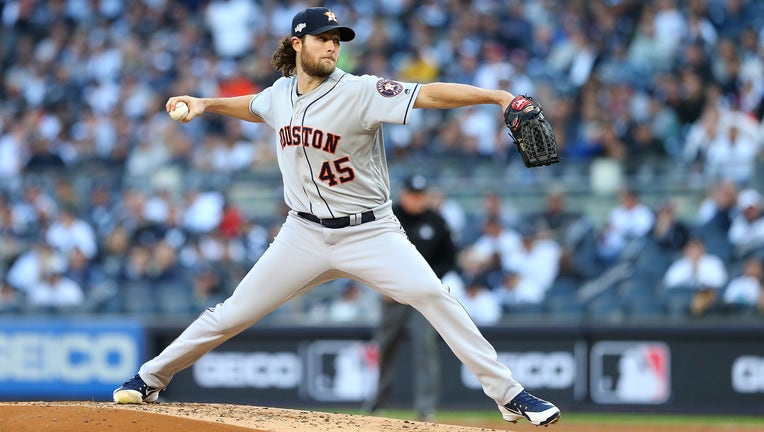 HOUSTON - Gerrit Cole rattles off the names of the pitching greats with ease, featuring the same command he shows with his vaunted four-seam fastball.

Plus the guys he saw in person as a kid -- Randy Johnson and Curt Schilling -- when they dominated in October.

Now in the midst of perhaps the most remarkable run in baseball history, it's his turn, starting Game 1 of the World Series.

"The people you keep referring to," Cole said Monday, "got the job done. So I'm trying to deliver on that front."

Because as we all know, heading into Tuesday night's opener between his Houston Astros and the Washington Nationals, this is when reputations are built -- or wrecked.

Madison Bumgarner, Orel Hershiser and Pedro Martinez excelled in their first Series starts. So did Clayton Kershaw, although his ledger is more checkered.

Cole enters this matchup against fellow ace Max Scherzer at 19-0 in his last 25 starts, including three wins in the playoffs. No pitcher has ever won 20 in a row in a single season.

"I mean, I've been in the situation, faced really good pitchers here in the National League over the years; Kershaw, (Jacob) deGrom, those guys. You just know you've got to come out there, you're going to be throwing up zeros. And you've got to try to match the intensity from your opponent," Scherzer said.

"And Cole's had a terrific year. So obviously it's going to be one heck of a challenge."

Cole led the majors in strikeouts, topped the AL in ERA and finished second in the big leagues to teammate Justin Verlander in wins.

"When you dream as a little kid, you dream about storybook endings and storybook players and scenarios like that," Cole said.

In the old days of baseball -- like, three or four years ago -- this is about the time someone would step up and say, well, he's due for a loss.

Got to be, right?

"I faced him in the past, but what he's been doing the past few years has been phenomenal since he came over to the Astros. It's like he's found his stride," said Kendrick, who will be Washington's designated hitter in Game 1.

"I've been watching him throughout the postseason. His stuff's electric, everybody knows that," he said.

Fusing his talent with the Astros' fortified analytics approach, Cole has found what works best for him. Among the results with his four-seamer, curve and slider: Nearly 17 percent of his pitches result in a swing-and-miss, the highest rate of anyone since such data has been tracked in the last 18 years.

RELATED: World Series ticket scams to look out for

NL MVP candidate Anthony Rendon is among the few hitters who've managed some success against Cole, going 5 for 13 overall.

"It's been truly amazing just to watch him do his thing and the amount of success that he's had," Rendon said. "Not that he didn't have success in Pittsburgh prior."

"But I think by him coming to a postseason team, being around guys or a team that has been in the postseason more times than not, I think that's really going to elevate your game and I think that's true for him," he said.

Talking about the Washington lineup, Cole was equally effusive in his praise for Rendon.

"It starts with Anthony Rendon being the tone-setter, a really special talent, probably a generational talent. We'll have to see how it all plays out," Cole said.

"But if it goes as expected, he'll probably end up in the Hall of Fame. He's so cool and calm and collected. And I think a lot of his players feed off that," he said.

Same way the Astros feel when Cole takes the mound.

Asked recently whether he'd ever seen someone on this kind of run, Verlander answered, "Never."

All this for Cole, along with the prospect of earning well over a $200 million contract in free agency after the World Series ends.

Yet if any of this is going to his head, by the way, it hasn't been apparent.

On Monday at Minute Maid Park, when the 29-year-old right-hander walked into a small interview room to do a news conference, Astros manager AJ Hinch was finishing up at the podium.

Without fanfare, Cole simply sat down by himself on the well-worn carpet and bided his time for a few minutes, silently picking at his fingernails.

Not a care in the world -- or World Series.

You can watch the World Series on FOX 26 beginning on Tuesday, Oct. 22.