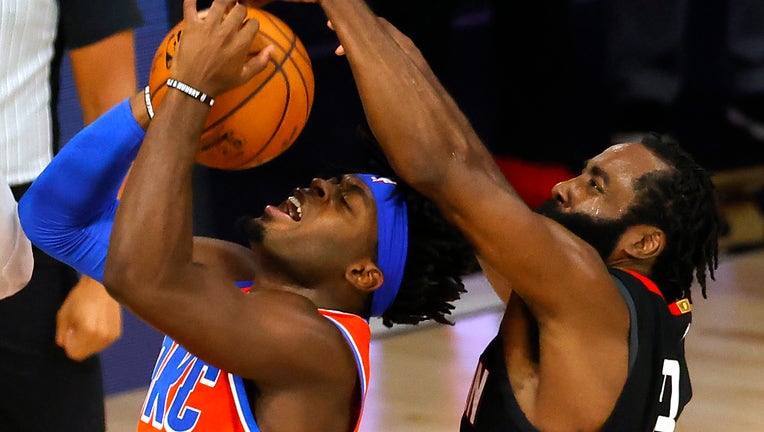 LAKE BUENA VISTA, FLORIDA - AUGUST 29: James Harden #13 of the Houston Rockets blocks a shot by Luguentz Dort #5 of the Oklahoma City Thunder during the third quarter in Game Five of the Western Conference First Round during the 2020 NBA Playoffs at

LAKE BUENA VISTA, Fla. - James Harden scored 31 points and Russell Westbrook returned to face his former team in the playoffs for the first time, helping the Houston Rockets beat the Oklahoma City Thunder 114-80 on Saturday night for a 3-2 lead in the first-round playoff series.

Robert Covington added 22 points and Eric Gordon had 20. The Rockets can advance to the conference semifinals with a victory Monday.

Westbrook, who had played just one game since Aug. 4 because of a quadriceps injury -- missing the Rockets' first four playoff games -- had seven points, six rebounds and seven assists in 23 minutes.

Dennis Schroder led the Thunder with 19 points despite being ejected midway through the third quarter for hitting P.J. Tucker in the groin; Tucker also was ejected after retaliating with a head-butt.

Steven Adams had 12 points and 14 rebounds, and Darius Bazley had 10 points and 12 rebounds for the Thunder. They trailed by three at halftime before giving up 19 of the first 21 points of the third.

Houston scored 20 of the game's first 27 points, but the Thunder erased the deficit in the second -- taking a brief lead of as many as five points -- before the Rockets took a 48-45 lead into the half. Houston outscored the Thunder 37-18 in the third.

TIP-INS
Harden extended his streak of playoff games with 20 or more points to 18 in a row -- the longest active streak in the league. ... The Rockets are 6-0 when holding an opponent to under 100 points.

UP NEXT
Game 6 is Monday.