HOUSTON - A triple threat. He can run, throw, and cry.

Yes, Deshaun Watson is human too. Houston Texans fans saw a glimpse of that this past week when the 4-year-quarterback signed a 4-year-contract extension. In a surprise zoom call with family and friends, the 24-year-old broke down in tears, just thinking about his journey. 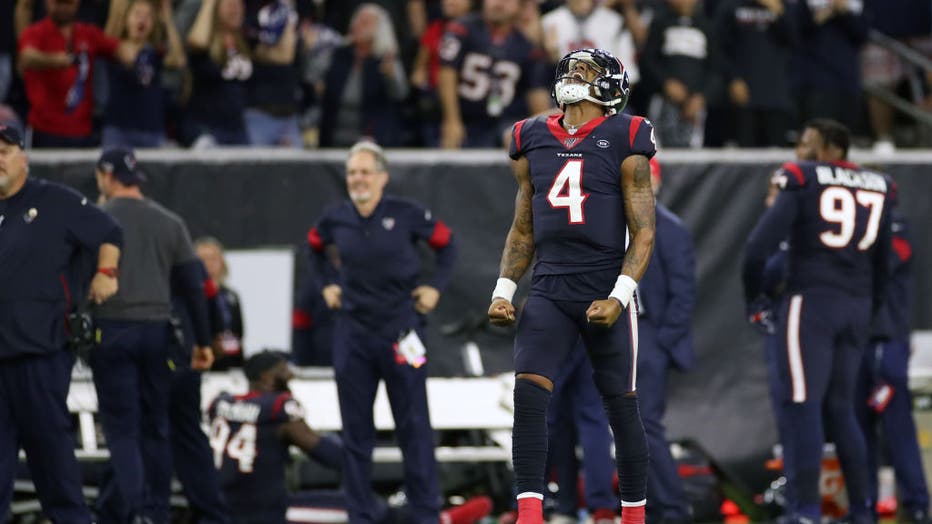 HOUSTON, TEXAS - JANUARY 04: Deshaun Watson #4 of the Houston Texans celebrates a 34-yard pass completion to Taiwan Jones (not pictured) against the Buffalo Bills during overtime of the AFC Wild Card Playoff game at NRG Stadium on January 04, 2020 in

Before he became an NFL superstar, Watson was just a skinny kid down in Gainesville, Georgia. His life changed dramatically when he and his family received a home from Habitat for Humanity in 2011.

When Watson was 9-years-old he saw a flier for Habitat for Humanity in his Halloween basket. He grabbed the paper and handed it to his mother, Deann, who looked around her cramped apartment in south Georgia and decided to give it a shot.

She applied, and on top of a full-time job, Deann was able to complete over 200 hours of volunteer service. She donated at shelters and put in work building homes, in 2011 she was able to build her own. 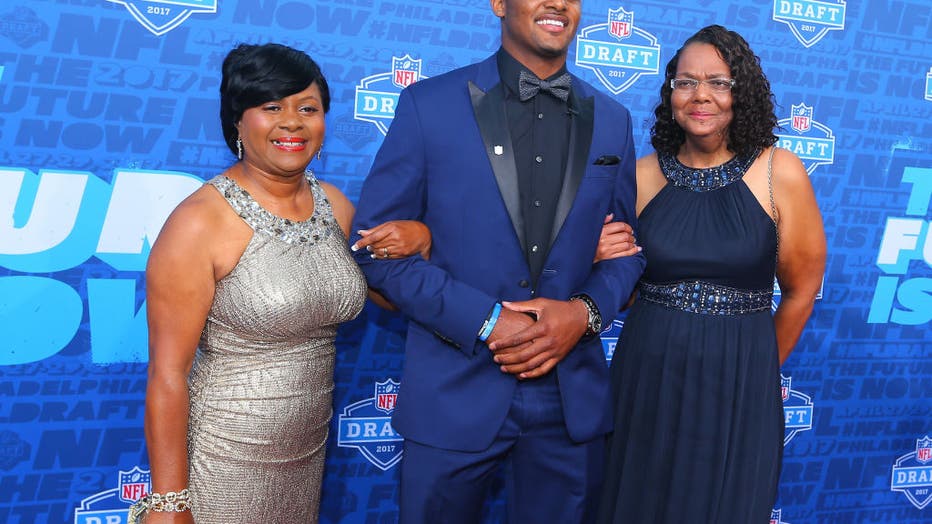 PHILADELPHIA, PA - APRIL 27: Deshaun Watson from Clemson with his mother Deann (right) and aunt Sonia (left) on the Red Carpet outside of the NFL Draft Theater on April 27, 2017 in Philadelphia, PA. (Photo by Rich Graessle/Icon Sportswire via Getty I

Former NFL running back Warrick Dunn presented the keys to the family on the big day and even helped to furnish the four-bedroom, two-bathroom ranch style home. "I felt grown having my own room," Watson told the Associated Press.

He hit the ground running for the Gainesville High School. By the time he was a sophomore he was getting attention for college coaches for his arm. During that same time he was working as a ball boy with the Atlanta Falcons. Watson had NFL ties early on, he threw passes to Roddy White and Julio Jones for his four-year tenure with the team.

He definitely changed the culture, Watson graduated Clemson with a Degree in Communications and brought the team a National Championship on his way out the door. 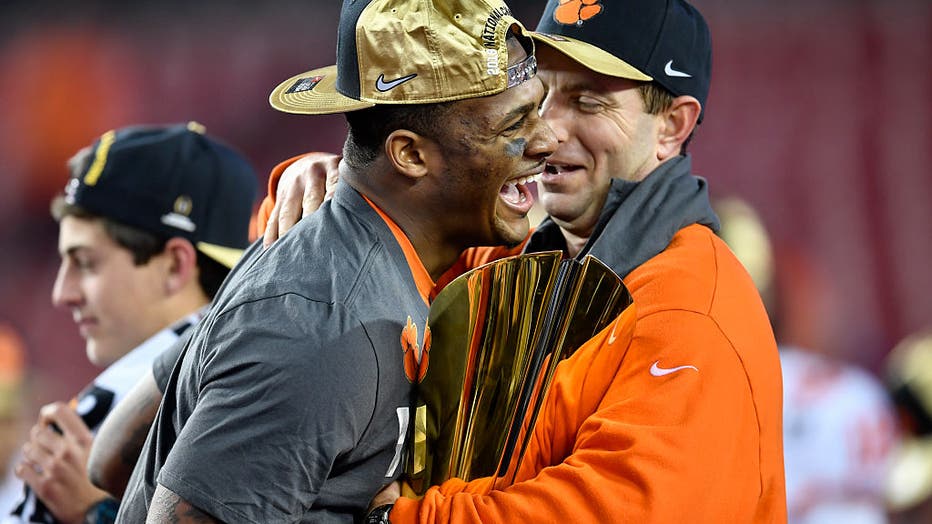 TAMPA, FL - JANUARY 09: Clemson University head coach Dabo Swinney and Clemson University quarterback Deshaun Watson (4) have a laugh during the awards ceremony after the CFP National Championship game between the Alabama Crimson Tide and the Clemson

The kindness of others had a lasting effect on him too. These days Watson doesn’t miss a moment to show love. Before the game Thursday night he donated meals to essential workers in Kansas City.

Between practices, he showed up to give out 500 new laptops to students throughout Harris County.

Days before that he spoke out an attempt to help struggling families who got evicted in Houston and needed a place to live. “This is crazy,” Watson tweeted, “Someone please help me find Israel Rodriguez and the elderly women in this video. Would love to help them get back on their feet.”

That’s what it’s about right? Helping your people off the ground. Throughout the past decade, Watson hasn’t lost sight of that. He’s hoping to share that same sentiment with his new book, titled Pass it On. He partnered with New York Times Best Selling Author, Lavaille Lavette to tell his story.

Watson's story is something out of a movie. He's one of few who beat the odds, that's part of the reason that he shoulders a responsibility.

Forget all the outside factors for a second, just looking at football alone, the chances of athletes playing professionally after college is only 1.6% (according to the NCAA).

He's elite, and plays like it, last season he finished with 3,852 yards and 26 touchdowns. He hopes to keep the same production up this season. 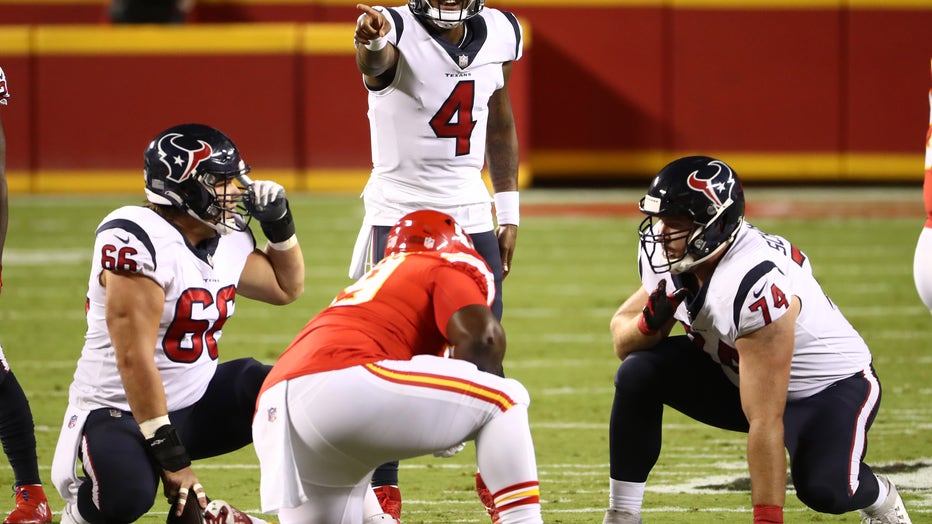 KANSAS CITY, MISSOURI - SEPTEMBER 10: Deshaun Watson #4 of the Houston Texans points out a defensive set against the Houston Texans during the first quarter at Arrowhead Stadium on September 10, 2020 in Kansas City, Missouri. (Photo by Jamie Squire/G

Even after a season-opener loss, a guy as humble as Watson has to look on the bright side.

"Growing up from where I'm from, it's not too many people that make it out."

He'll be here for the next six years. It took some time, but it looks like that 9-year-old Georgia boy built a new home for himself down in Houston Texas.