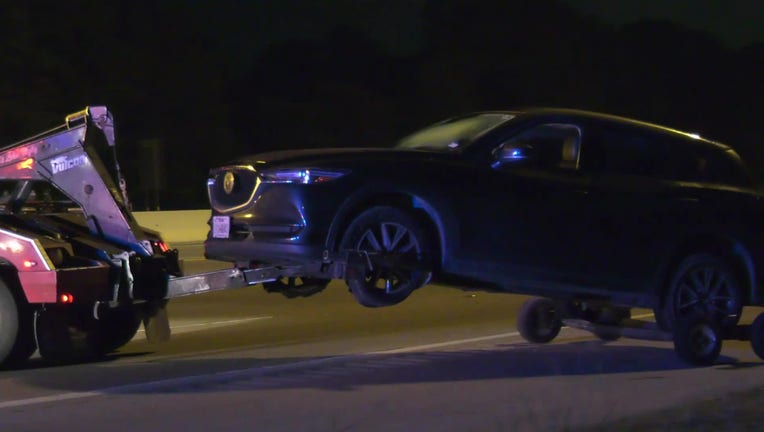 A vehicle is towed away after a pursuit with a wrong-way driver ended on I-45.

HOUSTON - A driver was detained after driving the wrong way on I-45 early Thursday morning as authorities pursued and tried to get him to stop, Houston police say.

Around 2:45 a.m., authorities received multiple calls from people on I-45 reporting a wrong-way driver.

Houston police say units were able to catch up with the vehicle.

Police say the driver was traveling northbound in the southbound lanes, and authorities pursued with their lights and sirens on in the northbound lanes.

Police notified authorities north of Houston about the pursuit with the wrong-way driver. Montgomery County units were able to shut down the southbound lanes of I-45 near Creighton Road.

Police say Montgomery County units used spike strips to stop the vehicle. The driver finally came to a stop near Creighton. He was detained.

Houston police say the driver is believed to have been intoxicated. He allegedly told authorities that he had left a restaurant near 610 and Westheimer.

Houston police say the driver will be charged with evading arrest in a motor vehicle, among other charges.