Through an online archive of firsthand accounts from survivors, witnesses, and first responders, viewers can learn how different communities were affected, and how people stepped up to assist their neighbors.

HOUSTON - Looking back is never easy, but it’s a historian’s job to constantly examine and even critique the past.

When a history-making natural disaster like Hurricane Harvey hit Houston, one thing scholars will all note in their examinations is how resilient residents were during a time of crisis. That’s why in 2018, professors at the University of Houston’s history department began collecting interviews from survivors, witnesses, and first responders of Hurricane Harvey and five years later, nearly 100 stories have been collected but all highlight the strengths of Houston residents and a desperate need to ensure history does not repeat itself with another natural disaster.

Entitled Resilient Houston: Documenting Hurricane Harvey, viewers may access an online archive of oral history interviews from residents across the city, learn how different communities were affected, and how people stepped up to assist their neighbors. 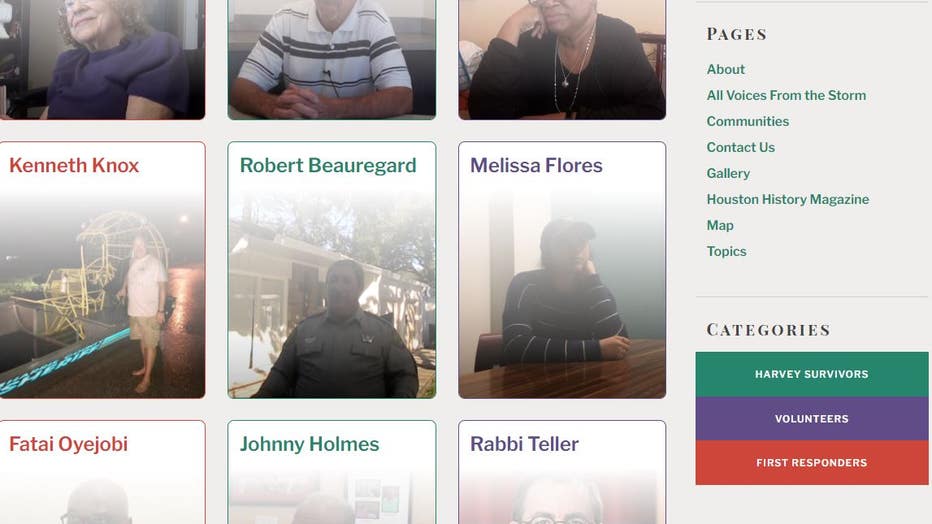 Dr. Debbie Harwell with the University of Houston’s Center for Public History told FOX 26 in an interview how vital oral history interviews and firsthand accounts were to keeping records of Hurricane Harvey.

"For those of us who do oral histories as part of our sort of our daily routine or our work, we recognized Harvey immediately as something that lends itself to oral history, because oral history really gets to the crux of people's experiences and how those experiences impact them," she said. "And there was no question that a storm of the magnitude of Harvey was a historic event, and so to capture those stories, right away is also really good because you are tapping into people's memories very close to the time of the event, so it lent itself to oral histories and those of us who enjoy doing that sort of research really keyed in on that from the beginning."

Dr. Debbie Harwell with the University of Houston's Center for Public History spoke with FOX 26 to learn more about the online archive created to document Hurricane Harvey.

While Resilient Houston was spearheaded by the university, Dr. Todd Romero, also with the history department, explains it was a collaborative project where both graduate and undergraduate students were able to assist professors in the UH Honors College and received help from community partners like the African American Library at the Gregory School.

"One of the great joys for me and for my collaborators is that the majority of the work was carried through by courses, by courses that were, in some cases, undergraduate or graduate courses, we held many public events, oral history events all over the city," Dr. Romero said. "And one of the things that I thoroughly enjoy about my work is not only do I get to work within our communities, we are going to work with our talented students. And one of the great things about working in an urban university is that most of our students come from the Houston area."

Dr. Todd Romero with the University of Houston spoke with FOX 26 to learn more about an online archive, Resilient Houston: Documenting Hurricane Harvey, which features firsthand accounts from witnesses, survivors, and first responders and how they demonstrated the city's resiliency during a time of crisis.

"They ultimately understand the area in a way that as someone who's lived here for 16 years now, I know a lot more than I did 16 years ago, but I didn't grow up here," he continued. "And I don't understand the city, I think in that kind of organic way that many of our students do. And so the work was put forward by talented students who most often met in community centers and houses of worship."

Both professors noted people were generally open to sharing their stories of what happened during Harvey, but there were still challenges that presented themselves.

"For the most part, people were really interested in taking part," Dr. Harwell explained. "In places where it was a really heavily flooded community, sometimes it was a little bit difficult for people to be able to make the time to get to us. Because even several months later, they were still, you know, rebuilding their homes and things like that. But even with that, they frequently did make an effort to get there."

"I think one of the things that you become really sensitive to is to recognize that when you ask people to share their stories, they're sharing something that's precious, you're asking them to (depending on their experience during the hurricane) to pick at stories that are traumatic, that involve a variety of different kinds of loss that sometimes can be about the immediate event, but it can also be about a longer history as well," Dr. Romero added. "And so I think over time we came became better at being sensitive to that learning how to listen, and learning how to honor those stories that people go through."

In the difficulties that some residents faced due to Harvey and continue to deal with its aftermath, Dr. Harwell added how important it was to remember those who even after five years, are still trying to pick up the pieces.

"On the other hand, you have people that are incredibly devastated, and they've been through tremendous trauma," she said. "And it's going to take them years and years and years to get over that trauma. So you see, also all sides of the spectrum. And it gives you a really an appreciation for why it's important to, gather the stories and understand that no, one person has the same experience from the same event.

In fact, Dr. Romero even said the stories shed light on a bigger picture that is, a history of neglect to certain parts of Houston.

"We learned a lot, not just about the hurricane itself, but past weather events, about the long history of these communities about how a tragedy like Hurricane Harvey will in some cases reveal not only the resilience of a neighborhood but also sometimes decades of neglect in some communities that it reveals disparities and access to education, access to infrastructure, asks access to a lot of things that many of us consider just basic facts of life," he explained.

For those that were able to see the other side of Harvey, there was still a personal note that struck when interviews were conducted. Dr. Harwell, for example, explained how she had been through two devastating hurricanes in the past before Hurricane Harvey. And while she was fortunate to not receive much damage during Harvey, it was still surprising to see how susceptible the city was to another natural disaster.

"I suppose my big takeaway is I don't think we've really learned our lesson yet," she said. "Unfortunately, the fact that even after Harvey, we seem to still be allowing people to build or developers to build in flood plains. That, to me is really problematic; the fact that we have had disputes about requiring new construction to be X number of feet higher than the, you know, the 100-year floodplain or the 500-year floodplain level. That to me is also problematic, because those are things that right off the bat without really any additional expense, at least from a government standpoint, would reduce the number of people who would flood in the future."

Granted, there have been efforts to correct past mistakes, but Dr. Harwell claims it’s not enough.

"We've got some improvement projects that are in the works, and some improvement projects that have been completed in the interim, but we need more and the public and the government are frequently reluctant to spend money on infrastructure," she continued. "And even after an event like Harvey, when a year or two or three passes, or five, in this case, although we had a few localized flooding events…back to back. And then now we seem to have forgotten some of that."

Decades from now, who knows what the city of Houston or its residents will experience, but Dr. Romero hopes future scholars or lawmakers will push for more efforts to care for its residents, especially those in previously overlooked communities.

Harris County residents say they're being pressured to accept far less than the value of their property in a buyout program for Hurricane Harvey victims.

"The single biggest lesson that I took away from doing the interviews is the degree to which natural disasters are conditioned by human choice," he concluded. "And that the way in which individual communities experience those disasters is shaped by the resources that they get prior to the disaster in the case of some neighborhoods, the neglect that they've suffered or suffered over decades, you know, and so one of the things that I think natural disasters can reveal to us in the aftermath of the storm, not as just the number of inches of rain that fell, or how many houses were damaged, or how many billions of dollars that cost, but it's a real major of what communities we have chosen as a society to support and what communities have been neglected in terms of education, in terms of access to work in terms of access to infrastructure, health care, and all the rest. And so, you know, in that way, it was really powerful to me, how much I learned about what some communities suffered, and how it was shaped by that history."

In other words, while we can revel in how some residents were able to adapt and act neighborly to those in need during difficult times, it’s only by examining the past, that we can work toward a better and safer future.

To learn more about Resilient Houston, visit their website.