Musk could lay off large number of Twitter staffers, charge for verification

Billionaire Elon Musk has taken control of social media giant, Twitter, which could lead to massive layoffs and a fee for the blue check mark. FOX 5 New York's Raegan Medgie spoke with LiveNOW from FOX's Josh Breslow about the future of Twitter.

The story of Twitter's blue checkmarks — a simple verification system that's come to be viewed as an elite status symbol — began with some high-profile impersonations, just as the site began taking off in 2008 and '09.

LaRussa eventually dropped his lawsuit. But in June of that year, Twitter's then-CEO Biz Stone introduced a verification system to sort out authentic accounts from impostors. The benefit would be to the holders of the accounts, but also to everyone else on Twitter. They could be sure, if they saw the blue check next to a name, that what they were reading was authentic.

Fast-forward to 2022. Twitter's new owner and ruler, billionaire Elon Musk, wants to turn this verification system into a revenue source for the company he paid $44 billion to purchase. It's a 180-degree turn from the stance he took earlier this year, before his buyout closed, when he said he wanted to "verify all humans" on Twitter.

After floating the idea of charging users $20 a month for the "blue check" and some extra features, he appeared to quickly scale it back in a Twitter exchange with author Stephen King, who posted "If that gets instituted, I’m gone like Enron."

"We need to pay the bills somehow! Twitter cannot rely entirely on advertisers. How about $8?" Musk replied.

Whatever the price, the idea of a paid verification system is raising some complex questions and concerns — beyond the customary cheers and jeers that have accompanied Musk's every move since he took ownership of the social media company last week.

"Tapping into Twitter users to make more money may be the right strategy, but verification isn’t the right feature to charge for," said Insider Intelligence analyst Jasmine Enberg. "Verification is intended to ensure the integrity of accounts and conversations on the platform, rather than a premium feature meant to elevate the experience. There is a growing appetite among some social users to pay for features that add value to their experiences."

Instead of charging for authentication, though, Enberg said Musk should be looking at adding features to Twitter that get people to use it more and help them grow their follower base and find a way to make money from those.

"Turning users into customers isn’t an easy sell, and the value exchange has to be right in order for it to pay off," she said. 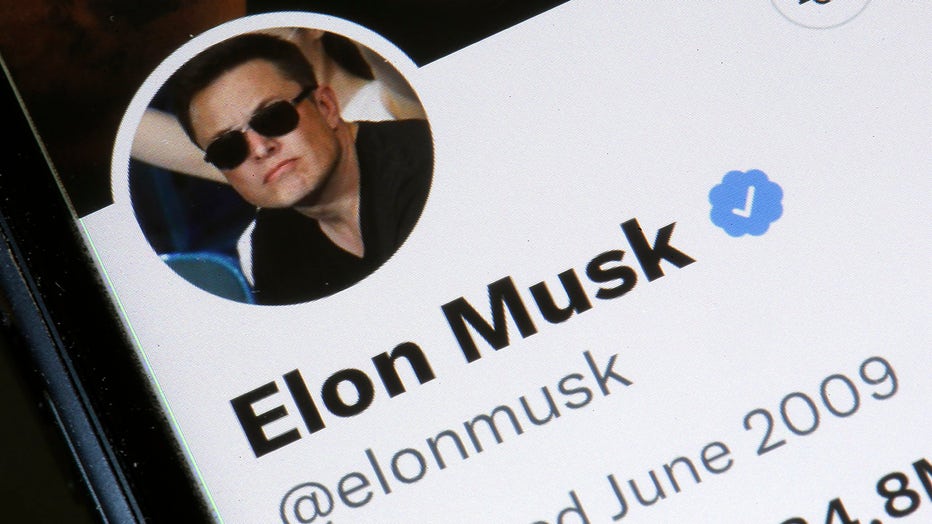 In this photo illustration, the Elon Musk’s Twitter account is displayed on the screen of an iPhone on April 26, 2022 in Paris, France. (Photo illustration by Chesnot/Getty Images)

Twitter already has a subscription plan, Twitter Blue, that for $5 a month lets users access extra features, such as the ability to undo a tweet and read ad-free articles. Musk's plan, as it appears from his tweets, seems to be expanding it to charge more money for more features — including the verification badge — and spread it to more users.

"Of roughly 300,000 verified accounts on Twitter we would estimate only about 25% would go down this path ultimately and pay the $8 per month fee," Wedbush analyst Daniel Ives said.

That would mean only $7.2 million a year in extra revenue for Twitter — not enough to move the dial for a company whose last reported quarterly revenue was $1.18 billion.

Ives expects Musk to first go after users who already have the check to charge them to keep it, then likely introduce other tiered pricing plans for other accounts.

"The problem is with many athletes and celebrities willing to lose their coveted blue check and refusing to pay the monthly fee it would be an ominous black eye moment for Musk on his first strategic move with Twitter," he said.

While Musk’s exact plans are not clear, experts are raising concerns about the consequences of having a paid verification system that leaves anyone unwilling to pay vulnerable to impersonation — and anyone who does pay the ability to have their Twitter presence boosted by the platform’s algorithms.

Elon Musk has officially taken control of Twitter and ousted the CEO, chief financial officer and the company’s top lawyer.

While many verified users on Twitter are famous, there are also community activists, journalists at small newspapers and outlets inside and outside of the U.S. — and regular people who simply find themselves in the news. For this subset, $8 a month may not be worth it, no matter how many memes Musk posts about the cost of a cup of coffee.

The idea behind verification — which other social networks later copied — was to ensure that public figures, politicians and businesses were who they say they are. It began small at first, as things do when tech companies test out new features and functions.

"The experiment will begin with public officials, public agencies, famous artists, athletes, and other well known individuals at risk of impersonation," Stone wrote in 2009. He suggested that those who can't be immediately verified put their official website in their Twitter bio to show that they are who they say they are.

Business accounts — such as brand pages for Coca-Cola or McDonald's — were not included in the initial verification system, nor were rank-and-file journalists. Those were added later, as misinformation from fake sites and accounts became a bigger problem on social media.

While the "blue check" (which is actually a white checkmark in a blue frame, or black checkmark in a white frame if you are using Twitter in dark mode) has come to be viewed in some circles as an elite status symbol for the rich and famous, its purpose has always been to ensure that the people and accounts tweeting are who they say they are. As such, it benefited Twitter as much — if not more — as it benefitted the accounts that were verified, by clamping down on impersonations.

Kelly McBride, an expert on journalism ethics for the Poynter Institute think tank, said she suspected the blue check would become less valuable if people know that it could be bought. Currently, it signifies a person with a particular position or public stature whose identity has been verified.

"Twitter may end up being a similar story," she said. "It may become less valuable to journalists. And that wouldn’t be a bad thing."