If you want to enjoy the sights and sounds of nature in Galveston, you can't go wrong with horses and dolphins.

GALVESTON, Texas - If you want to enjoy the sights and sounds of nature in Galveston, you can't go wrong with horses and dolphins.

We caught up with a family visiting from Kansas City, as we were all ready to take our day at the beach to a whole new level.

"I'm kind of nervous, but I think it will be fun," says first-time rider, Sienna Brock. "I'm hoping for some good fun pictures with the kids and making memories, and of course laughing at each other," says her mother, Heather.

Galveston Island Horse & Pony Rides is the only company on the island to offer this unique experience. They make it as easy as can be to get on the horse, by offering a sturdy stairwell to the tall horses.

The horses are extremely calm and follow simple commands well. They know the drill, after following the same path for seven years.

"I get a lot of people tell me that this is a bucket list for them, been waiting their whole lives to do this," says Michael Salas, who led our group along the beach.

The sights and sounds are incredibly relaxing; from the chirping of seagulls to waves lapping up on the beach.

"It's definitely a hidden gem for Galveston Island," says Michael. "We get a lot of people from all over the world who come to ride with us. You can't beat the views off the east end of the island."

It was a success for the Brock family!

"The horses were well-behaved and knew exactly what they were doing. Total thumbs and I would recommend," states Heather. 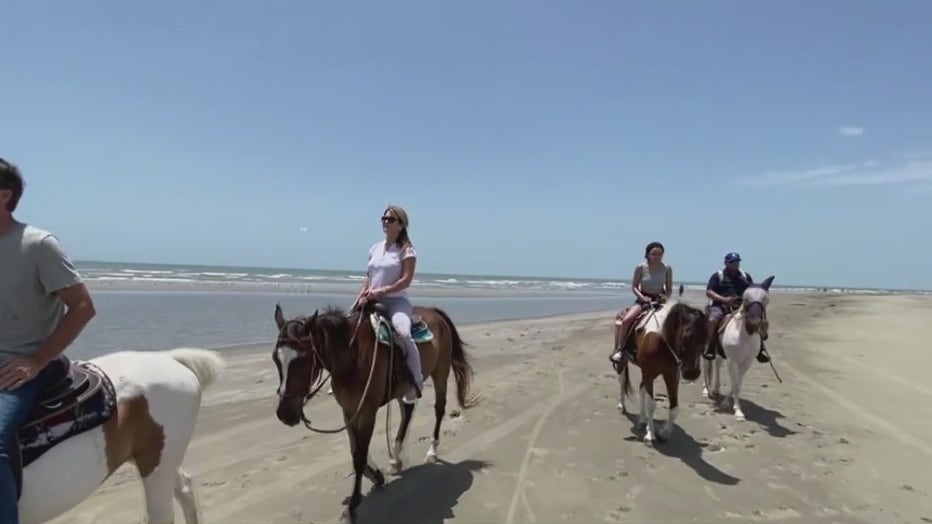 All aboard! Next up: Pier 22 to experience the Historic Harbor Tour and Dolphin Watch aboard the Seagull II boat.

You can choose the upper or lower deck to search for dolphins.

"We have a large grouping of dolphins that have lived around here their entire lives, so we come out here and that's also something great for the kids to see as well," says our Captain, Brian Leadingham.

You also get to see the catch of the day from local fishermen, plus plenty of pelicans pose for a pic. It’s also fun to float alongside captivating cruise ships.

"People love coming out here to learn a little bit about Galveston Bay and see some of the historical markers along the way," states Captain Brian. Seawolf Park on Pelican Island is a good example!

Head over there to get a glimpse of a World War II submarine or enjoy a popular pier and playground. You can see most of it from the boat.

"We have a lot of different stuff that comes in and out daily, so you never really know what we're going to see on our tour, but one of the major highlights is an old-sunken concrete ship out in the harbor," says Captain Brian. SS Selma, that he’s referring to, is the largest concrete ship ever made and was brought to life back in 1919. Fish now flock to it and so do fishermen in their boats!

It's never a bad day to go fishing and our FOX 26 Photojournalist Todd Smith spent the morning doing just that with Captain Charles Butler in Galveston Bay.

Lucky for us, the mammals of the sea, were almost magnetic to our memorable boat ride, as more dolphins float and frolic at the surface to leave us in awe.

"The best part about seeing dolphins here is that it's not guaranteed," says a smiling Captain Brian. "So when we do find them, it's exciting even for us, and you never know what they're going to be doing: either just swimming around or sometimes they're even jumping in front of ships or playing in wakes, so seeing dolphins is always a highlight."

For more information on horse and pony rides, click here. You can also click here to learn more about the historic harbor tour and dolphin watch.