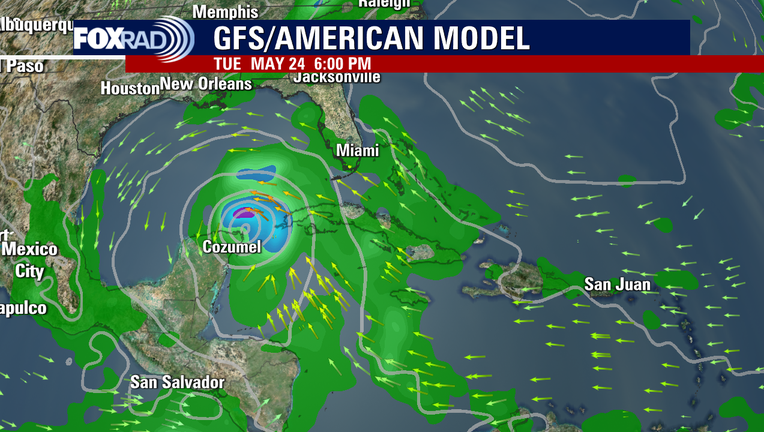 HOUSTON - As we approach the start of hurricane season, you may start to see images circulating the internet about the possibility for development toward the end of May. While there is an indication of this possibility showing up on some models, anything is possible that far out.

But events more than 10 days out from occurring rarely verify exactly the way that they originally present themselves, if at all. I'm going to use the game of Plinko, which you may have played to discuss how we approach the process of long-range forecasting.

All forecast models begin from original conditions. After that, it's a simulation or an idea of what may happen, but not a guarantee. You may be surprised to know, that weather balloons are not routinely launched in Houston. We interpolate our initial conditions from other nearby weather balloon launches.

What the heck is interpolation, you ask? It's just a fancy word for using math to estimate values. While special soundings may be launched in anticipation of high impact weather events to get a better picture of precisely what is happening locally, that means that most of the time our starting point is already a little off. That makes forecasting in Houston both challenging, but also a lot of fun.

RELATED: Here’s how to prepare for hurricane season now

And one of the many reasons why we stress the importance of making sure that you are getting your weather information from a reliable, credible source. Not armchair meteorologists on Facebook, or weather enthusiasts on YouTube. Degreed meteorologists (Your Gulf Coast Weather Authority) spend years studying the way that the atmosphere works. While we use models as guidance, it is ultimately our understanding and knowledge of the atmosphere that makes the forecast. 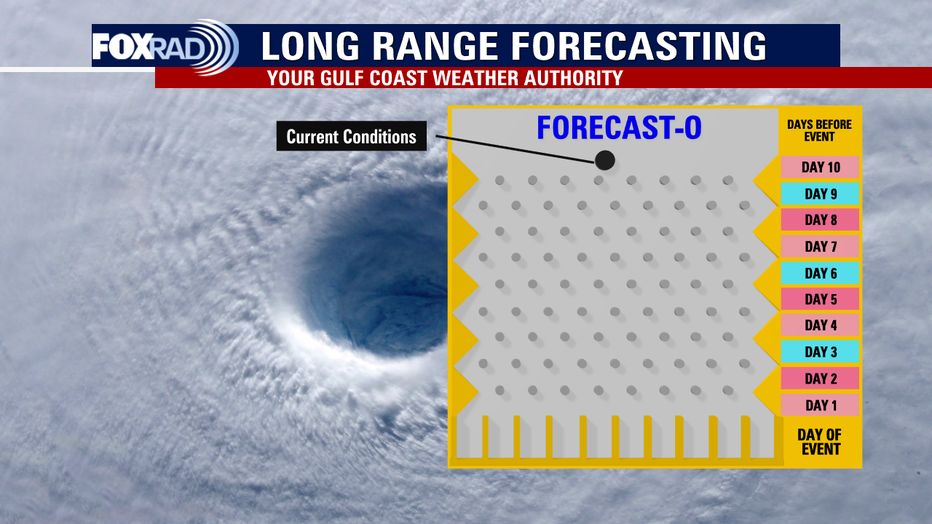 Plinko starts by dropping a ball from the top, and the farther away the ball is from the bottom the more possible paths it can take. This is why from days 7-10, we are simply watching trends. Does this feature continue showing up across all model runs? Does the location or intensity change? How many models are showing the feature? Do those models have biases, and if so what are they? How might that impact the outcome? For instance, the GFS has a long range wet bias and a tendency of sniffing out "scary storms" wayyyy off in the distance. Ultimately, there are still a wide variety of outcomes. Does this stage remind you a lot of spaghetti plots? It should! 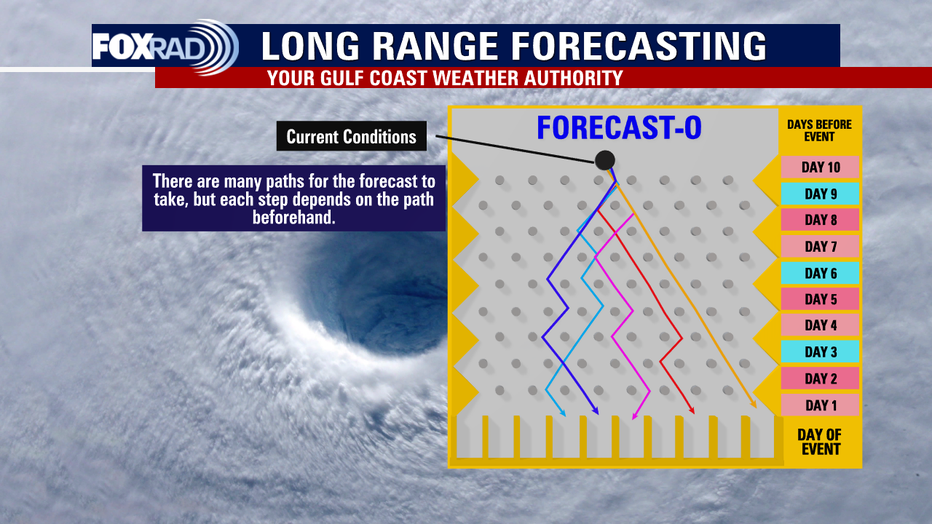 We have operational models (one model, one run) such as the GFS, or the American Model which is currently showing said possibility for said development. But we also have ensembles, which are multiple runs of the same model with small perturbations, or changes to each one. We often look to ensembles especially when we are uncertain, because they factor in the wide variety of possibilities especially this far out. But one model run only provides one possible solution, and while it could end up happening. It also could not. Once they start agreeing, that's when it's time to pay attention. 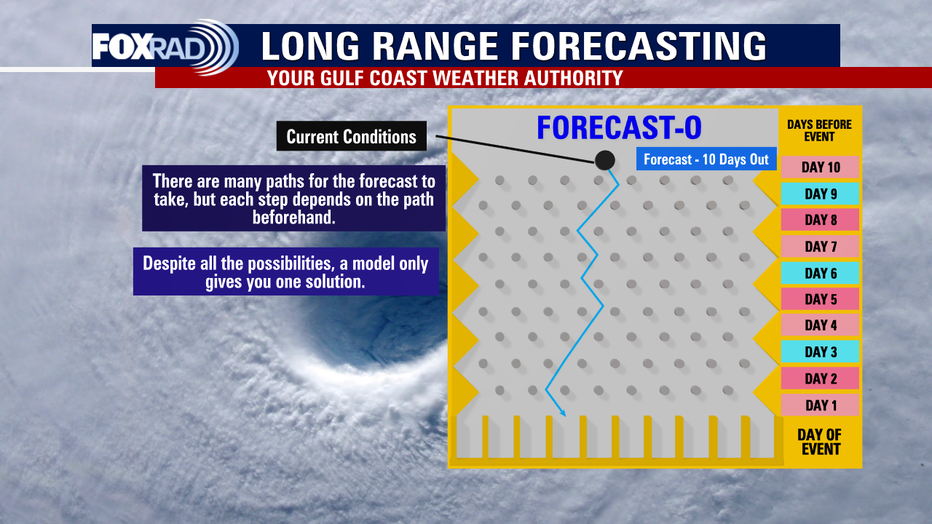 When it comes to weather, a few degrees, a few miles... slight changes can completely alter the forecast. Notice how, the Plinko ball started in the same spot but the farther down it gets the farther away the actual solution is moving from the original intended forecast. 72 hours out from an event is when we can begin to start to give you specifics. Because now, the window of possibilities is narrowing. It's also important to note that long range models are run at a much larger grid spacing or "resolution" because of the sheer amount of computing power that they require. The Global GFS (shown below) is run at about ~25km grid spacing. Short range, high resolution models like the HRRR (High Resolution Rapid Refresh) is run at about 3km. This is why details can't get fine-tuned until we get closer. They happen on a smaller scale than what the long range model is capable of. Think about the difference in picture quality between an old box tv compared to newer flat screen 4k television. Or how much picture quality has improved from original iPhone cameras until now. 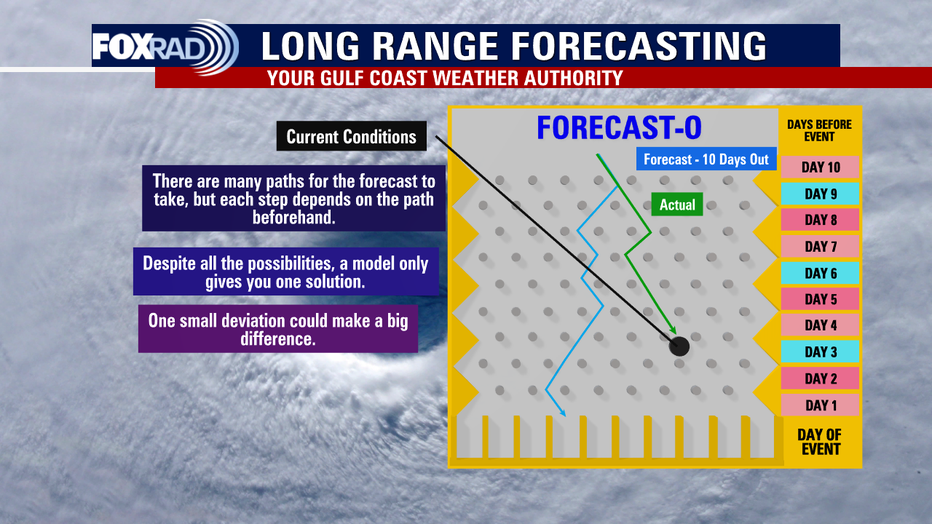 But, as we've experienced in the past things change sometimes even 24-48 hours in advance. Certain events we simply have to monitor real time. This is particularly true for conditional forecasts. IF this forms, IT will be bad. But said thing does not always form. Days in advance we know the conditions might be favorable for development, but limiting factors may also exist. From a severe weather standpoint, that would be a cap. From a hurricane standpoint, it might be something like wind shear. IF said limiting factors are overcome, event will occur. If not, it won't. Ultimately, though... only one outcome ends up verifying. And sometimes, it's a mix of the models. Maybe one got the timing right, but missed the intensity. Another one had the right idea on rainfall totals, but missed the mark on wind speeds. You get the idea. 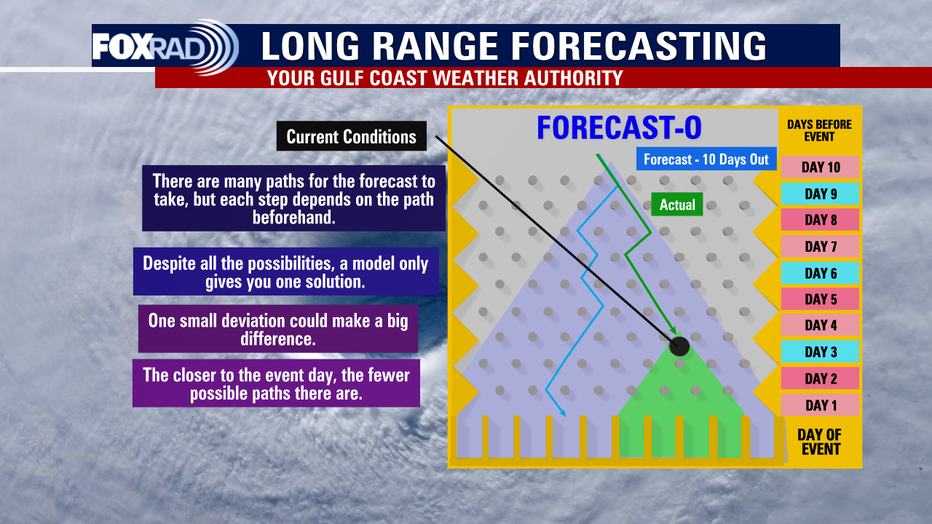 Here's the latest run of the GFS. While it does show a potential storm forming in the Gulf near late May, it is impossible to know what the final track of said storm would even end up being, if it does form, this far in advance. We have been watching this very closely for you for since Wednesday 5/11.

And in that time frame, it went from potentially impacting the Florida panhandle, to shifting farther west, to increasing/decreasing in size and intensity, to fizzling out over Mexico and this is why you are just now hearing about it from us. We stand by our weather team motto of "facts, not fear". And bottom line, the facts are still very much uncertain at this time. 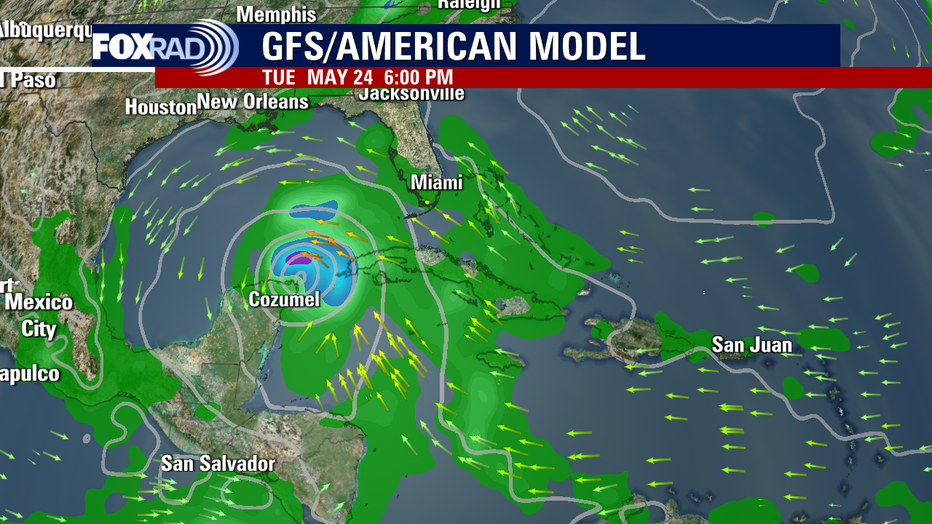 So for now, don't stress but just know that the possibility exists and stay tuned into the forecast for updates. Hurricane Season officially begins in a few weeks so your plans and preps should already be underway anyway. If, and when this ends up becoming a cause for concern locally, we will immediately let you know. And in the event that we end up crossing that first name off the list earlier than expected this year, it would be Alex. 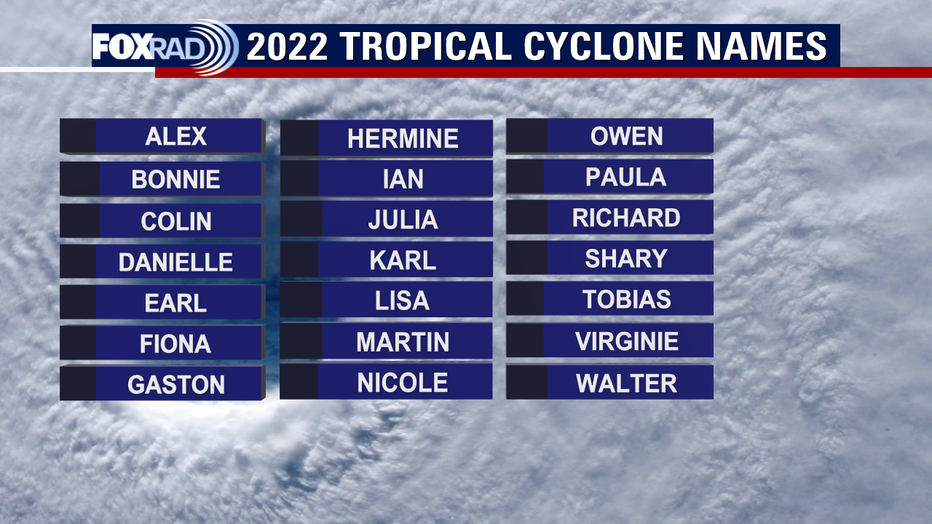