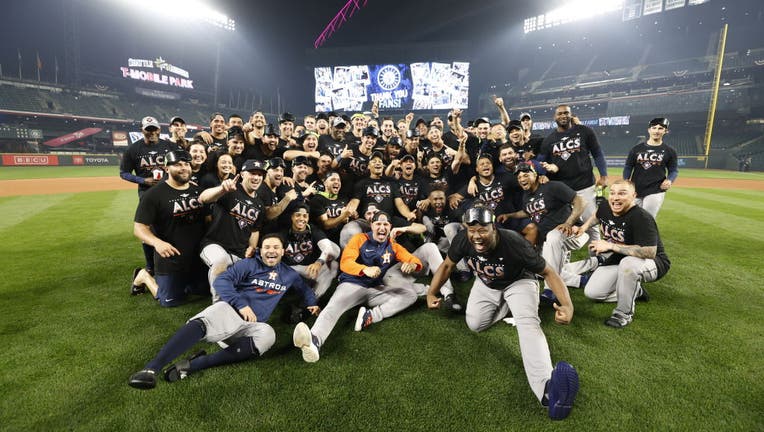 SEATTLE, WASHINGTON - OCTOBER 15: Houston Astros pose for a photo after defeating the Seattle Mariners 1-0 in game three of the American League Division Series to advance at T-Mobile Park on October 15, 2022 in Seattle, Washington. (Photo by Steph Ch

SEATTLE (AP) — Jeremy Peña and the Houston Astros just kept going. Scoreless inning after scoreless inning, as day turned into night in front of a frenzied crowd in Seattle.

They eventually found a way. That's how the Astros reached the AL Championship Series for the sixth straight year.

It's just what they do.

Peña homered in the 18th inning, and the Astros beat the Mariners 1-0 on Saturday for a three-game sweep of their AL Division Series.

Peña drove a slider from Penn Murfee deep to left-center for the rookie's first playoff homer, providing the only run in an afternoon full of dominant pitching and empty trips to the plate.

The 18 innings matched the longest game in playoff history and the 6 hours, 22 minutes was the third-longest in time.

Exhausting for everyone? Absolutely. But exhilarating for the Astros.

"Man, that was a long game. But you still got to lock in, try to put together good at-bats," Peña said. "I was just trying to stay inside the baseball, drove it in the gap."

Spoiling Seattle's first home playoff appearance since 2001, Houston continued its ALCS streak that began with its 2017 World Series title. Next up is the New York Yankees or Cleveland Guardians in Game 1 of the ALCS on Wednesday.

While Yordan Alvarez got the big hits in the first two games in Houston, it was Peña that set the table for Alvarez’s opportunities. As Game 3 made its way into its sixth hour, Peña delivered another painful blow to the Mariners that ended their short return to the postseason.

"We all know that we belong here now and we all know what it takes to get here and get beyond this point," Seattle shortstop J.P. Crawford said.

After 21 years, Seattle fans welcomed playoff baseball back inside T-Mobile Park. They got their money’s worth, and then some.

Three previous playoff games reached the 18th inning, one involving Houston. The Astros beat the Atlanta Braves 7-6 in 18 innings in Game 4 of the 2005 NLDS on Chris Burke’s game-ending homer.

Game 2 of the 2014 NLDS between San Francisco and Washington and Game 3 of the 2018 World Series between Los Angeles and Boston also went 18 innings.

But those games had runs. This one failed to produce anything until Peña’s swing on a 3-2 pitch.

"I feel like in the playoffs you can't try and do too much, especially the later the game goes," Peña said.

Seattle’s best scoring chance was Julio Rodríguez's line drive that thudded off the wall in the eighth. The Mariners had runners in scoring position in the 13th and 17th, but couldn’t get a key two-out hit against Houston’s superb bullpen.

Unlike baseball's regular season, there is no automatic runner when playoff games go to extra innings.

"They pitched great. They played a great series. They beat us," Seattle manager Scott Servais said. "In my mind, and I think our players’ mind, is a break here or there goes our way in this series, it could have been a lot different. But end of the day, they got the big hits in each of the games and they end up winning them."

"Watching the whole thing the guys are doing a really good job and I'm really proud of them. ... I was just trying to help," Garcia said.

The teams combined to strike out 42 times, topping the postseason record of 39 set by the Guardians and Rays last week in their AL wild-card matchup that was scoreless for 15 innings before Oscar Gonzalez’s home run sent Cleveland to the ALDS.

"Their pitching was phenomenal today as well. We kept putting the zero up there and kept putting the zero up there and you think we’re going to be able to break through because we have so many times," Servais said. "It’s kind of what we’re accustomed to playing — those tight games and finding a way but there were no errors made in that game today."

Houston advanced despite a rough performance for Jose Altuve, who went 0 for 8 in Game 3 for the first time in his career and was hitless in 16 at-bats in the series.

Altuve joined Xander Bogaerts in Game 3 of 2018 World Series versus the Dodgers as only players to go 0 for 8 or worse in a postseason game. But Houston's other pieces came through, none bigger than its young shortstop who took on a prominent role after Carlos Correa departed in free agency.

Peña’s homer was his only hit in eight at-bats. But it was his contributions in the first two games that helped Houston travel to Seattle with a 2-0 lead in the series.

"In a team like this, with the pitching we have, with the defense we have, we never give up," Altuve said. "We went out and played every single inning like it was the last inning. Putting everything we have, until Jeremy came and hit the big homer."

Felix Hernandez threw out a ceremonial first pitch to a deafening ovation. Hernandez spent 15 seasons with the Mariners but never had the opportunity of pitching in the postseason. He won 169 games and had a career 3.42 ERA, last pitching for Seattle in 2019.

"We’re not going to forget this and coming into next year it will fuel us even more," Seattle outfielder Jarred Kelenic said.

Seattle’s return to the postseason was played with a smoky haze and terrible air quality engulfing the Puget Sound region. A shift in winds and wildfire still smoldering in the Cascade Mountains created a dingy haze above T-Mobile Park. The air quality index in Seattle at first pitch registered at 161.