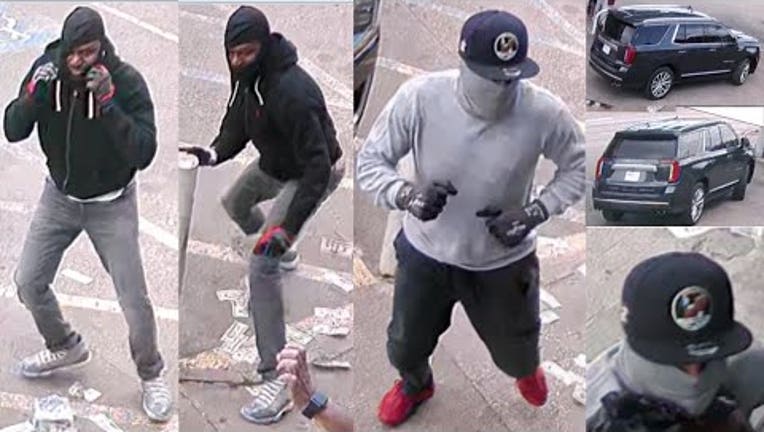 (Photo: Screenshot from video provided by the Houston Police Department)

HOUSTON - Authorities are searching for two men seen on camera beating and robbing a man in southwest Houston.

It happened on Saturday, April 23rd around 12:10 p.m. Video provided by the Houston Police Department shows cash falling to the ground as the robbers attacked the unidentified victim and tried grabbing as much money as they could.

Officials say the victim had completed a bank run in Sugar Land and was heading to his convenience store in the 10000 block of Telephone Rd.

As he walked to the front doors, two men snuck up and attacked him to try and get ahold of the bag of money he had. An employee inside the store saw what happened and fought back against one of the robbers. After a brief struggle, the two robbers got back in their SUV with paper plates with whatever cash they could grab. It's unclear exactly how much they took off with.

Police described the robbers as Black men with a medium build, standing at about 6 feet tall, wearing hoodies and cloth face coverings.

Officials say the case is also related to a "jugging" (robbery by force) incident that happened in March in the 400 block of W Bell Rd.

That's where police say a man grabbed an envelope from a victim, before getting into an SUV and fleeing the scene. The victim is seen on video trying to chase the robber but to no avail.

If you have any information on the suspects seen in the video, you're asked to call Crime Stoppers at 713-222-TIPS. Your knowledge that could help lead to an arrest may result in a cash reward of up to $5,000.