As negotiations continue, educators in St. Paul and Minneapolis school district's largest teachers' unions say they have filed their intent to strike Wednesday afternoon. They spoke to media at 4:15 p.m. to reiterate their position, and answer questions.

(FOX 9) - As negotiations continue, educators in St. Paul and Minneapolis school district's largest teachers' unions say they have filed their intent to strike Wednesday afternoon. They spoke to media at 4:15 p.m. to reiterate their position, and answer questions.

Standing outside the Bureau of Mediation Services, representatives of both the Minneapolis Federation of Teachers and St. Paul Federation of Educators held banners standing in unity with one another’s demands of their respective districts.

"It’s important now more than ever to be a voice for our students and advocate for what they need," said Leah Jordan, assistant director with the office of equity with St. Paul Public Schools. 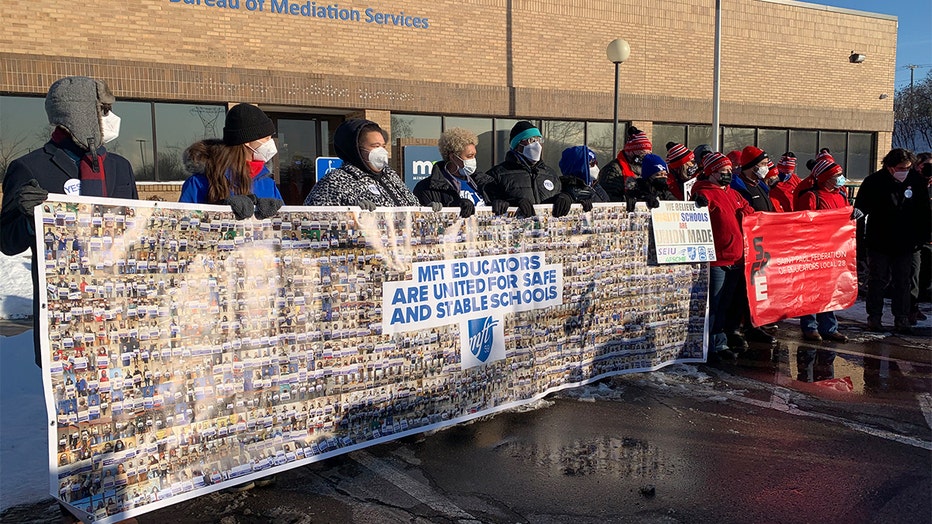 The unions voted to authorize strikes late last Thursday, Feb. 17. The vote was overwhelmingly in support of strike authorization in both districts. The unions are required to provide a 10-day notice before a strike begins.

The strike will begin Tuesday, March 8, if agreements are not reached during the 10-day "cooling" period.

Although unions in each district are fighting for different things, they are both fighting for language in contracts that limit class sizes, guaranteed mental health resources for students and more resources to help students with special needs.

"We know there will be sacrifice, but it’s a sacrifice for the greater good in the long-term," said Greta Callahan, president of the Minneapolis Federation of Teachers. "We’re hoping by March 7 we can reach some agreements. There’s plenty of time for the district to make the changes students deserve." 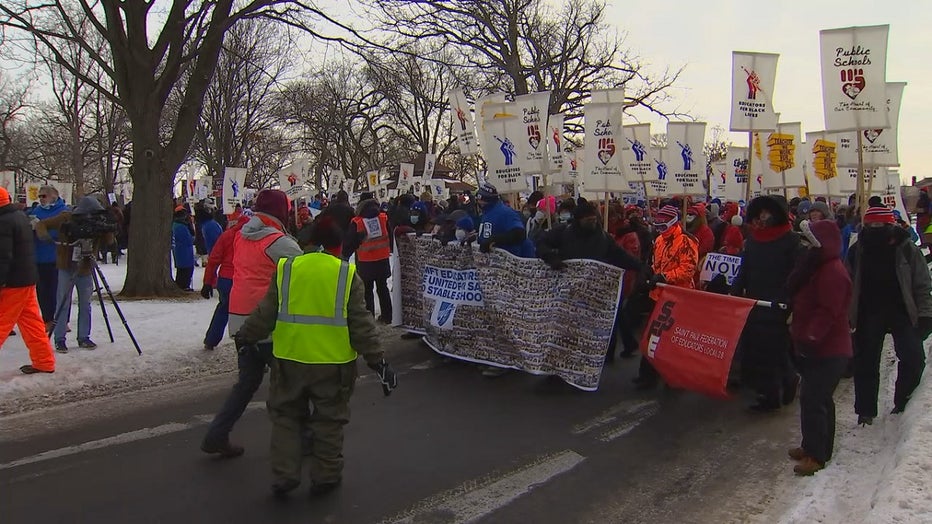 According to Callahan, Minneapolis Public Schools have lost 645 teachers since the beginning of the pandemic 120 of which were teachers of color.

"It’s imperative they make these changes now because we cannot afford to lose more quality professionals," she said.

Throughout the negotiation process, both districts have been going back and forth with unions – each district at times saying they don’t have the funding to meet some of these demands.

"Our educators deserve everything they are asking for in a new contract. They do. At the same time, we have fewer students, fewer resources and less money to meet those needs," St. Paul Public Schools Superintendent Joe Gothard said in his video statement made after teachers' union's announcement.

Gothard said more meetings with the St. Paul Federation of Teachers are scheduled for Feb. 25 and 28, as well as March 2 and 4, "with the intention of reaching a settlement and avoiding a strike altogether."

According to Minneapolis Public Schools Superintendent Ed Graff, its district continues to face a significant gap between the resources it currently has, revenue and its financial commitments (or expenses).

"This isn’t caused by one single factor, but instead a combination of them, including nearly 3,00 0fewer students in our schools, the underfunding of education and the increased costs of running schools," Graff said in a video statement reacting to the strike announcement.

Graff said thanks in part of emergency COVID-19 federal relief funding MPS has been able to manage the budget shortfall in the short-term, but the one-time influx of cash will not be able to fund long-term expenses such as increased salaries and benefits for staff.

As a result, MPS is left in the unenviable position of weighing the impacts of a strike now versus the impact on children in the future, "if we spend money we don’t have," Graff said.

According to Graff, staff has been instructed to meet and negotiate "24/7 if necessary to reach agreements" from now until March 7.

Click for more information on the demands in Minneapolis and St. Paul.