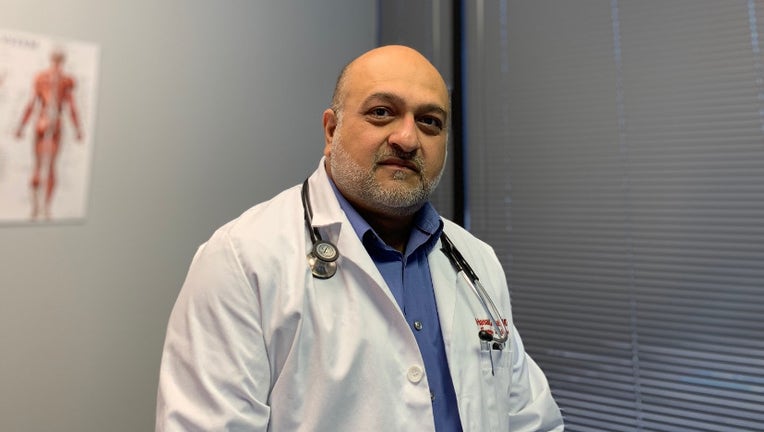 HOUSTON - It’s been a grueling six months for a Harris County doctor, who was accused of mishandling and stealing vials of the COVID-19 vaccine and giving them to family and friends.

Dr. Hasan Gokal breathed a sigh of relief Wednesday amid the news of a grand jury declining to indict him for the allegations.

And while he smiled with an almost melancholic tone as he told FOX 26 Houston how happy he was to hear the news, things have not been the same.

"All the threat that hung over me is finally over," he said. "The fact that it’s over lets me figure out what I want to do going forward."

The case garnered national attention due to its uniqueness, but in terms of how much, we caught up with Professor Valerie Gutmann Koch, co-director of the Health Law & Policy Institute at the University of Houston. From a legal perspective, she agrees the case is unique in terms of how it unfolded.

A case involving a Houston doctor accused of stealing COVID-19 vaccines concluded after a grand jury declined to indict him. The story received national attention due to its uniqueness but for more clarification, FOX 26 Houston spoke to Prof. Valerie Gutmann Koch, co-director of the Health Law & Policy Institute at the University of Houston.

**EDITOR'S NOTE** There was a glitch at 04:17 - the author asked the following: Dr. Hasan Gokal and his attorney say he used his best judgment to not let the doses go to waste – he started by looking at staff members, law enforcement before he started calling people that were qualified before giving one to his wife, who has a chronic health condition – from a medical ethics perspective, was that his decision to make or how would you advise someone if they were in a similar predicament? I ask this because we noted in one of our stories related to this case how Houston Methodist lost power to one of its generators during the winter storm and asked hospital staff to spread the word and invite anyone nearby to get the vaccine within the 6-hour time frame before it went to waste.

Additionally, there were several things about the case that seemed unclear – such as if there were in fact rules or protocols that weren’t properly put in place especially at the time they occurred when vaccines were only available to a select few.

"What really struck me about the facts of this case is the lack of transparency and clarity around what the rules were when it came to [the] distribution of the vaccine and what to do if there were excess vaccines," Prof. Koch added. "It’s amazing how much of a difference a couple of months can make in terms of these kinds of issues; back in December and January it was really hard to run on vaccines; people really desperately wanted access [to the vaccine] and for good reason."

Ultimately, Prof. Koch says this was a tough situation Dr. Gokal found himself in but ultimately believes he made the right decision.

"From the testimony, I’ve heard, and the facts I’ve heard, he really did everything he could to appropriately distribute the vaccine and in particular to follow the rules as he understood them at the institutional level and at the state level, at a time [when] rules are constantly changing (and they still are) as far as the vaccine distribution goes," she explained. "He really was stuck in between a rock and a hard place. He was stuck between choosing to try to do his best to save more lives to not waste those excess doses, at a time where there was scarcity… and maybe rules that weren’t entirely clear at the time, but he was in a really tough place."

RELATED: Houston doctor accused of stealing COVID vaccine for friends, family explains why he stands by his decision

Community organizers like Saleema Gul, who followed this case closely say they believe Dr. Gokal was targeted – perhaps because of his religious or ethnic background.

"His name is Hasan Gokal, it’s a Muslim name I believe…He was fired for vaccinating people and it just didn’t make sense to fire someone for saving lives because that’s what physicians do," Gul said. "It’s just easier to pick on Muslims and people of color."

During an interview with FOX 26 Houston, Dr. Gokal claimed philosophical differences in his approach to distributing the vaccines, citing his experience as an ER doctor may have played a factor in why his colleagues may have disagreed with his decision.

Dr. Hasan Gokal speaks to FOX 26 Houston moments after a grand jury declined to indict him on accusations of mishandling the COVID-19 vaccine.

"I believe the answer truly lies in a philosophical approach difference," he explained. "As an ER doctor, my first and foremost priority is towards the care of the patient, as time went on, I realized in Public Health, many people feel their first and foremost priority is to do the most expedient and politically easy, palatable thing and often those two things are at odds."

Admittedly, Dr. Gokal does suspect the colleague who reported him and ultimately cost him his job may have had an ulterior motive.

"I tend to believe it was personal because they knew exactly what I was doing…I made it clear the night of, the next morning, all along everything had been clear," he explained.  "And the way it happened, eight days later, you pull me into an office and say ‘oh, you’re fired,’ without any investigation, without questioning anything that happened and the next day you’re charged without any investigation, something doesn’t feel right."

And while Dr. Gokal can begin putting the case behind him, he does not believe his name is cleared just yet. Especially because of how traumatic the entire experience was for him.

"When this happened…I was completely blindsided and this news went out throughout the world but the follow-up stories and what happened afterward and the fact that I was cleared by one judge and now this, may not necessarily get to those people who only know me as ‘the guy who stole the vaccine’ as was presented in the beginning, and that’s unfortunate and it’s unfair," Dr. Gokal said. "I’m not sure if I’ll ever be able to get over that part properly and whether or not it’ll have an impact going forward but it certainly is on my mind."

Moreover, Dr. Gokal remains unsure if the decades he spent working in medicine will be overlooked due to how much attention this case received.

"I think it has the potential to do so and it keeps me having to make sure we present the whole story as it comes up but I honestly don’t know," he said. "Who knows how it’s going to pan out going forward? It worries me but I’m honestly not sure how I’m going to deal with it going forward."

Fortunately, Dr. Gokal notes he has received a wide range of support from his patients, other medical officials, as well as complete strangers outside of Texas.

"I think the support from the community has been consistent," Dr. Gokal said. "Really it was everybody who came forward and offered support…the part that really struck me and I’m really overwhelmed with gratitude on this is there were people in the middle of America (Tennessee, Kentucky) who sent $5, $7 in cash without a return address saying ‘this is to help your legal fees,’ and those are the ones who brought tears to my eyes."

The Harris Co. District Attorney’s office released the following statement to FOX 26 on Wednesday that reads:

"A grand jury today declined to indict Dr. Hasan Gokal. Grand jurors were asked to determine whether a criminal charge was warranted in his case after a magistrate and a misdemeanor judge disagreed in their rulings on probable cause.  Public Corruption Division prosecutors presented all the evidence to the grand jury, which is comprised of members of the community. We respect the decision of the grand jury in this and every case. Evidence, not public opinion, is the guiding principle of our work."