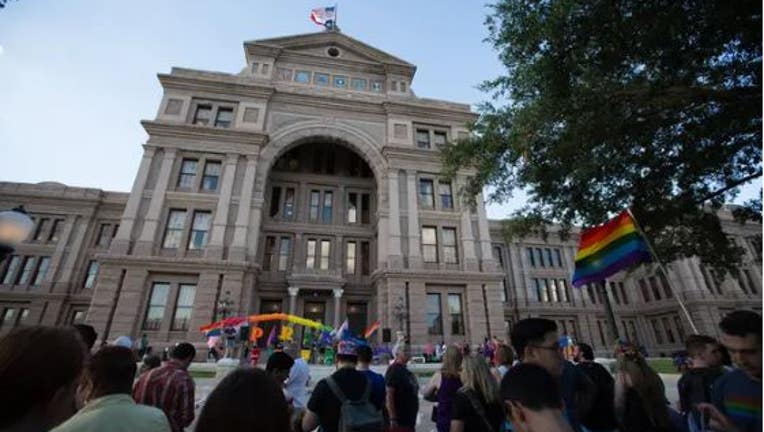 Activists and members of Austin’s LGBTQ community gathered on the steps of the capitol in 2017 to celebrate the anniversary of the 1969 Stonewall riots. A Texas judge on Friday temporarily blocked the state from some investigations into gender-affirm

An Austin judge has temporarily stopped the state from investigating many parents who provide gender-affirming care to their transgender children. The state has ruled out allegations of child abuse against one family under investigation, but at least eight more cases remain open.

Travis County District Judge Jan Soifer issued a temporary restraining order Friday in a lawsuit filed on behalf of three families and members of PFLAG, an LGBTQ advocacy group that claims more than 600 members in Texas.

"However, let’s be clear: These investigations into loving and affirming families shouldn’t be happening in the first place," Bond said in a statement.

This is the latest chapter in an ongoing legal battle stemming from a February order issued by Gov. Greg Abbott, directing the Department of Family and Protective Services to investigate parents who provide gender-affirming care to their transgender children.

This new lawsuit, filed Wednesday by the American Civil Liberties Union and Lambda Legal, seeks to block investigations into all parents of transgender children who belong to PFLAG.

During Friday’s hearing, Lambda Legal’s Paul Castillo revealed that the state has ruled out allegations of child abuse against Amber and Adam Briggle, who were under investigation for providing gender-affirming care to their 14-year-old son.

The Briggle family, outspoken advocates for transgender rights, once invited Republican Attorney General Ken Paxton over for dinner. Five years later, they ended up at the center of a child abuse investigation that stemmed, in part, from a nonbinding legal opinion that Paxton issued in February.

While their case has been closed, many others remain ongoing. Castillo said one of the families involved in the lawsuit was visited by DFPS investigators Friday morning.

"I do want to highlight for the court that every plaintiff in this case has illustrated the stress and trauma of even the potential of having a child removed, merely based on the suspicion that the family has pursued the medically necessary course of care that is prescribed by their doctor for gender dysphoria," Castillo said.

Gender-affirming care is recommended by all major medical associations to treat gender dysphoria, the distress someone can feel when their gender identity does not align with their biological sex. Gender dysphoria can be exacerbated as a child approaches puberty, so doctors often prescribe reversible puberty blockers and, sometimes, hormone therapy. More than half of all transgender youth report considering suicide, but the rates are much lower for those who are able to access gender-affirming health care.

The mental health impact of Abbott’s directive has already been clear, according to the lawsuit. One 16-year-old transgender boy, identified in the suit as Antonio Voe, attempted to kill himself after the directive came down. When he was admitted to an outpatient psychiatric facility, the staff reported his family to DPFS for child abuse because he was undergoing hormone therapy, according to the lawsuit.

In the hearing, Assistant Attorney General Courtney Corbello revisited the state’s argument that merely being under investigation by DFPS does not constitute harm to a family.

She also argued that PFLAG cannot bring this legal challenge on behalf of its members since there is no evidence that PFLAG members are being targeted for investigation based on their membership in the association.

Soifer disagreed, granting the temporary restraining order on behalf of the three named plaintiffs and PFLAG members. Soifer directed the lawyers to schedule a hearing in the coming days, where a judge will hear evidence and decide whether to extend the restraining order.