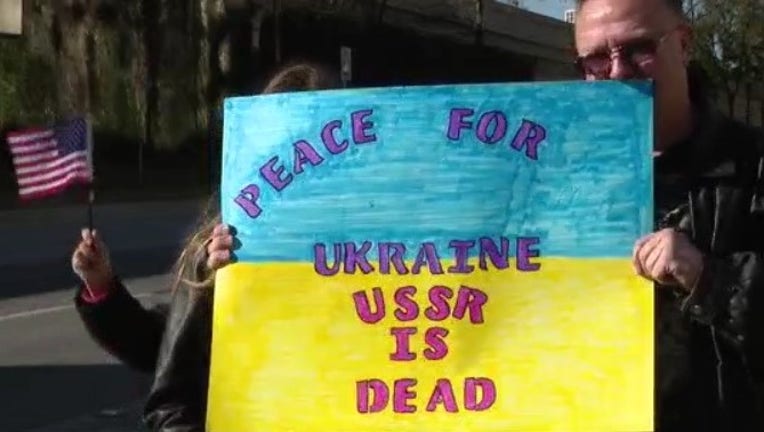 HOUSTON - As Russian invaders continue their deadly attacks on Ukraine for a fourth day, Houstonians are drawing the line in the sand.

During a rally outside the Russian Consulate in Houston, organizer Dr. K A Paul urged US officials to take tougher action.

"Isolate Russia 100%. Don’t do business with Russia anymore. Close down every consulate and embassy in 200 countries. Expel their staff. Take a stand. Otherwise, it's coming to you; not just to NATO countries. It’s coming to America," said Dr. Paul.

Since Thursday, more than 350 civilians have been killed so far in Ukraine and more than 1,600 injured.

The gruesome images are causing people around the world to condemn Russian President Vladimir Putin.

"He is a bully. He’s bullying his way into a free country and it’s time for him to go back where he came from. People all across the world need to stand up to the bully that he’s become and let him know that he’s not going to get to overrun any country he so chooses because he thinks we’re afraid. We’re not," said Debby Bryant.

"This sign says no to war in Russian. I wanted to write it in their language. I thought about the people on the ground and how it would be to be in that situation and to fear for your very life. It’s unimaginable that these people are going through that," said Kenshi Westover.

RELATED: 'Bring them to their financial knees,' Texas leaders speak out against Russia

The US and NATO allies have implemented new sanctions against Russia, hoping the financial blow to its economy will be enough to cripple the attacks.

On Saturday, Governor Greg Abbott asked Texas retailers to remove all Russian products from their shelves, in a show of solidarity to Ukraine.

"We can’t just say oh that’s over there. We need to realize that this is an evil that needs to be stopped. Putin should’ve been stopped a long time ago. Now is his time to be stopped," said Bryant.