Officials are releasing bodycam footage of what led up to a violent arrest in east Harris Co. where Ester Gonzales (A.K.A. Isis Calderon) was seen punched by a deputy. Family members and civil rights groups are now calling for the deputy's arrest.

HOUSTON - It's been nearly a week since a video circulated around social media, showing a woman being violently arrested by deputies with the Harris Co. Sheriff's Office.

The video showed one of the officers punching the woman, who was later identified as Ester Gonzales, 19 (A.K.A. Isis Calderon), and appears to knee her in the face.

According to officials, Gonzales was getting arrested for trespassing at a convenience store in the 12300 block of Eastex Freeway in east Harris Co. after she refused to leave. However, many viewers including a former judge and police officer, as well as an NAACP activist, were outraged by the footage, calling it "horrifying."

Community Activists Cesar Espinosa Executive Director at FIEL and Quanell X are calling for the deputies to be fired and charged.

On Wednesday, Asst. Chief Mike Lee gave a community briefing online saying the investigation remains ongoing and while they cannot comment on whether or not the officers acted in accordance with training until its complete, hopes the video will provide transparency for residents as well as her family.

Before showing the video Asst. Chief Lee delivered remarks regarding the incident saying two patrol deputies were called out to respond. One of them, met with the convenience store clerk, while the other met with Gonzales. Shortly afterward, three backup deputies arrived including a "Homeless Outreach" team officer. One of the officers spent several minutes speaking with her in Spanish, seeing if she needed anything like water.

"After spending several minutes with her, the Spanish-speaking deputy warned [Gonzales] that she was trespassing," he said. "After [Gonzales] refused to leave, two deputies attempted to detain and search her in order to identify her." 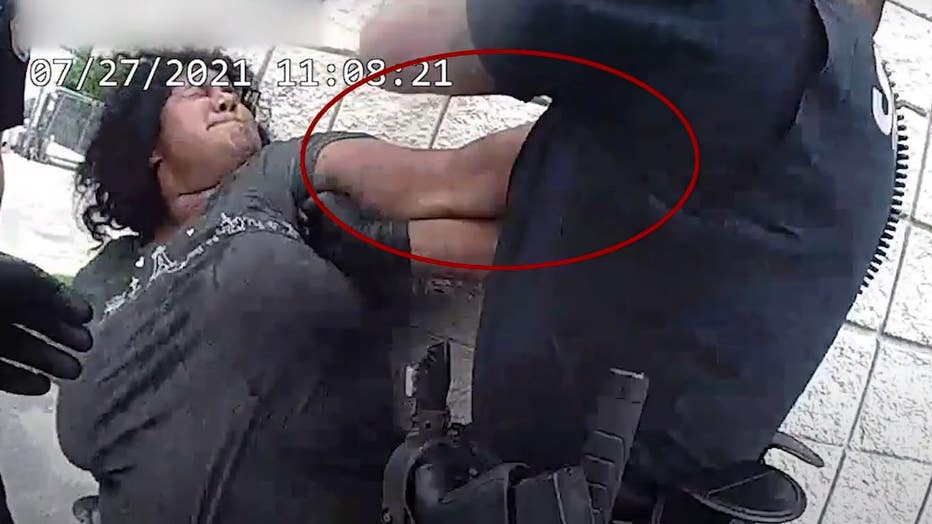 That's when Asst. Chief Lee says Gonzales continued to resist arrest and was seen hitting one of the officers before another deputy hit her.

"In the body camera footage, Ms. Gonzales can be seen struggling with deputies. She attempted to strike a deputy, causing his body-worn camera to fall to the ground," Asst. Chief Lee continued. "One deputy struck Ms. Gonzales multiple times before she was taken into custody. Deputies then placed a "spit hood" on Ms. Gonazles' face to prevent her from spitting on them." 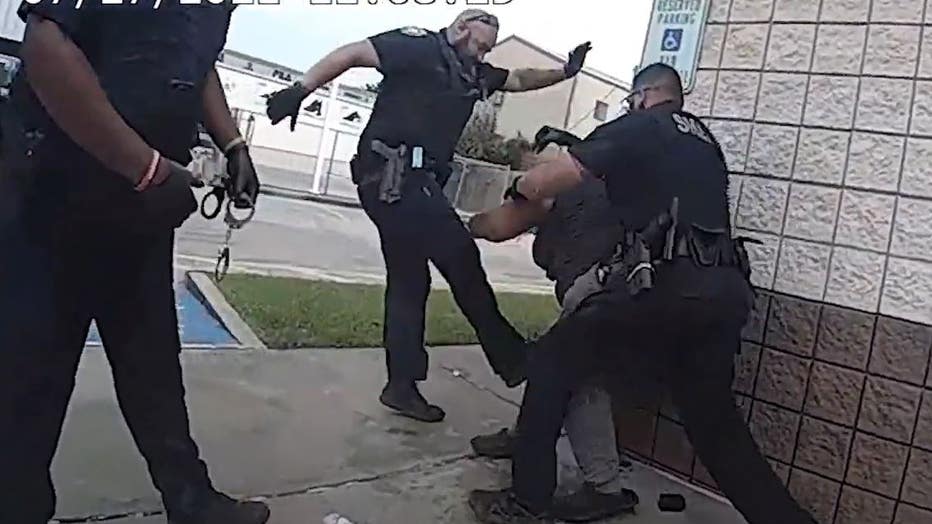 A background search showed Gonzales had an outstanding warrant from May 22, where she was accused of assaulting a public servant. According to the arrest report the 19 year old assaulted an Emergency Room Nurse as she waited to be transferred to receive mental health treatment.

"And they beat that woman like she was wanted for murder," says Community Activist Quanell X. "Any citizen of Harris County that was caught on video beating a dog like that would be locked up under the jail. It is a disgrace."

"This happened a week ago and this family still has yet to speak with their loved one," FIEL Executive Director Cesar Espinosa said. "The sisters want her to know she’s not alone and the sisters in the family are going to fight to make sure she gets the justice she deserves."

This comes days after FIEL, a Houston nonprofit, held a press conference with family members, who were unable to hold back tears as they screened the video with media outlets.

Family members of a woman seen on video beaten by deputies with the Harris Co. Sheriff’s Office spoke out Friday demanding justice and transparency with law enforcement.

Family members say Gonzales is diagnosed with schizophrenia as well as bipolar disorder and has been in and out of hospitals, so it’s been difficult for them to try and get her help.

HCSO says 3 deputies have been placed on administrative duties pending the outcome of the investigation which they say could take months.

"We have several things to fight for. We’re trying to get the criminal charges dropped," Espinoza concluded. "We’re also fighting to protect her immigration status so she doesn’t get deported and we want to hold these deputies accountable."