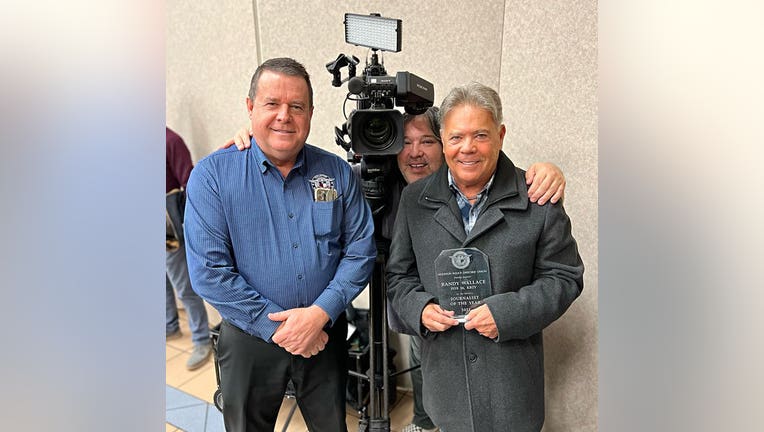 HOUSTON - Our entire team at FOX 26 is filled with dedicated journalists and the hard work they put in is not going unnoticed.

Randy Wallace, one of our veteran investigative reporters, received the first-ever ‘Journalist of the Year’ award from the Houston Police Officers' Union.

The HPOU highlighted Randy's work on FOX 26's Breaking Bond series, which uncovers the deadly effects of violent criminals being let out on multiple bonds.

Through his work on the weekly series, Randy has not only exposed numerous deaths at the hands of these criminals, but also the district judges who grant them the bonds to get out of jail.

The award also came on the heels of an exclusive interview he did with three HPD officers, who were injured during a shootout with a wanted suspect near downtown Houston last week.

Mr. Wallace has been with FOX 26 for more than 30 years and has won several awards for his reporting.

He's known for exposing the underbelly of crime in Houston and beyond, as seen in his work on the highly-acclaimed City Under Siege program to his reports on Medicare wheelchair fraud that caught the nation's attention.

Randy Wallace is also known for his reports on animal rights.

RELATED: Local horse rescuer loses her sanctuary to eviction, but the story still has happy ending

During a conversation with our Isiah Carey, on the Isiah Factor Uncensored, he spoke about his most recent award by the HPOU, calling it an honor.

FOX 26’s Randy Wallace discusses his report with the three officers who survived a shootout in the Fifth Ward last week – plus, his award from the Houston Police Officers' Union.

"It's a real honor to be recognized for Breaking Bond," Randy said. "It wouldn't be possible if management wasn't behind it. If they didn't let us do this weekly series. They believed in the issue just as much as I do. And of course, I cannot forget the man behind the camera, Raymond Ramirez, who basically does everything, and I do nothing."