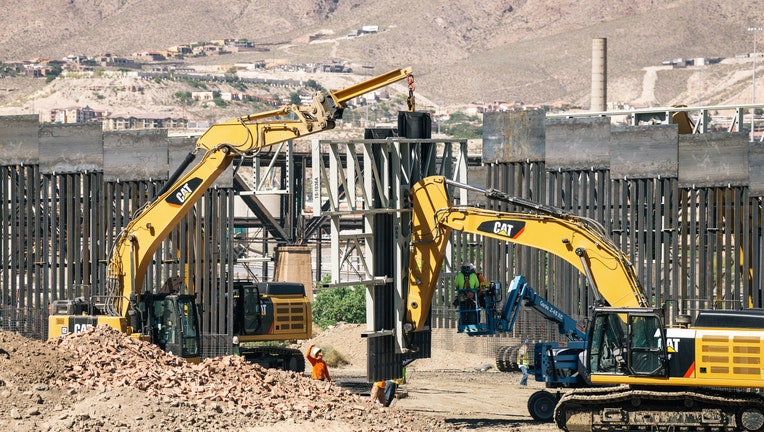 SAN DIEGO (AP) -- The Trump administration said Tuesday that it is waiving federal contracting laws to speed construction of a wall at the U.S.-Mexico border, moving the president closer to fulfilling a signature campaign promise in an election year but sparking criticism about the potential for fraud, waste, and abuse.
The Department of Homeland Security said waiving procurement regulations will allow 177 miles of wall to be built more quickly in California, Arizona, New Mexico, and Texas. The 10 waived laws include a requirement for open competition and giving losing bidders a chance to protest decisions.
The acting Homeland Security secretary, Chad Wolf, is exercising authority under a 2005 law that gives him sweeping powers to waive laws for building border barriers.
"We hope that will accelerate some of the construction that's going along the southwest border," Wolf told Fox News Channel's "Fox & Friends."
Secretaries under President Donald Trump have issued 16 waivers, and President George W. Bush issued five, but Tuesday's announcement marks the first time that waivers have applied to federal procurement rules. Previously they were used to waive environmental impact reviews.
The Trump administration said the waivers will allow at least 94 miles of wall to be built this year, bringing the Republican leader closer to his goal of about 450 miles since he took office and made it one of his top domestic priorities. It said the other 83 miles covered by the waivers may get built this year.
"Under the president's leadership, we are building more wall, faster than ever before," the department said in a statement.
Critics say the waivers do away with key taxpayer safeguards. U.S. Rep. Bennie Thompson, a Mississippi Democrat who chairs the House Homeland Security Committee, said the president's "cronies are likely to be the beneficiaries."
Charles Tiefer a professor at University of Baltimore School of Law who specializes in government contracts, said the government "can just pick the contractor you want and and you just ram it through ... The sky's the limit on what they bill."
Scott Amey, general counsel at the Project on Government Oversight, said waiving a law for contractors to provide the government with certified cost data -- such as how much they pay for labor or parts -- could lead to grossly inflated prices.
"It's equivalent to buying a car without seeing a sticker price," Amey said. "This could be a recipe for shoddy work and paying a much higher price than they should."
Administration officials say providing cost data can be onerous and difficult.
Congress gave the secretary the power to waive laws in areas of high illegal activity in 2005 in legislation that included emergency spending for wars in Iraq and Afghanistan and minimum standards for state-issued identification cards. The Senate approved it unanimously, with support from Joe Biden, Barack Obama, and Hillary Clinton. The House passed it with strong bipartisan support; then-Rep. Bernie Sanders voted against it.
The waiver authority has survived legal challenges. In 2018, a federal judge in San Diego rejected arguments by California and environmental advocacy groups that the secretary's broad powers should have an expiration date. An appeals court upheld the ruling last year.
The waivers, to be published in the Federal Register, apply to projects that the U.S. Army Corps of Engineers will award in six Border Patrol sectors: San Diego and El Centro in California; Yuma and Tucson in Arizona; El Paso, which spans New Mexico and west Texas, and Del Rio, Texas.
The move came five days after Defense Secretary Mark Esper approved a $3.8 billion request from Homeland Security to pay for walls in those same areas, and the Pentagon acknowledged that more cuts could be coming to provide additional funding. The Pentagon's decision stripped money from major aircraft and procurement programs that touch Republican and Democratic districts and states.
The Defense Department transferred $6.1 billion to wall construction from its counter-narcotics and construction budgets after Congress gave Trump only a portion of what he wanted. The administration has been able to spend Pentagon money during legal challenges.
The administration said the waivers will apply to contractors that have already been vetted. In May, the Army Corps named 12 companies to compete for Pentagon-funded contracts.
Those shortlisted companies are Fisher Sand & Gravel Co. of Dickinson, North Dakota, whose leader has sought publicity on conservative media; Texas Sterling Construction Co., of Houston, a unit of Sterling Construction Co.; a joint venture Caddell Construction Co., of Montgomery, Alabama, and Gibraltar Construction Co. of Annapolis, Maryland; Barnard Construction Co. of Bozeman, Montana; West Point Contractors Inc. of Tucson, Arizona; Southwest Valley Constructors Co. of Albuquerque, New Mexico, a unit of Kiewit Corp.; Bristol Construction Services LLC of Anchorage, Alaska; Randy Kinder Excavating Inc. of Dexter, Missouri; CJW Construction Inc., of Santa Ana, California; Burgos Group LLC of Albuquerque, New Mexico; Posillico Civil Inc. / Coastal Environmental Group Inc. of Farmingdale, New York; and Martin Brothers Construction Co. of Sacramento, California