Dr. Joe Phaahla, the Health Minister of South Africa, held a news briefing about the country's discovery of a new COVID-19 variant.

Dr. Anthony Fauci said Saturday morning that he would not be shocked to learn that the COVID-19 omicron variant is already in the U.S.

In an interview on NBC's "Weekend TODAY" show, the National Institute of Allergy and Infectious Diseases (NIAID) Director told co-hosts Kristen Welker and Peter Alexander that the strain has a large number of mutations that would suggest it could potentially evade immune protection and that scientists can predict it will be more transmissible.

"We don't know that yet, but you have to be careful and assume that that's the case. It also has a bunch of mutations that would suggest it could evade the protection, for example, of monoclonal antibodies and perhaps even convalescent plasma for people who've been infected and recovered and possibly vaccine. These are all ‘maybes,’ but the suggestion is enough," he said.

The chief medical adviser to the president said that the variant of concern's ability to infect the vaccinated and those who have recovered from infection "make us say this is something you got to pay really close attention to and be prepared for something that serious."

Though it "may not turn out that way," Fauci noted, the U.S. was trying to "get ahead of it" despite the unknowns.

"So, in real terms, Dr. Fauci, do you believe that omicron is already here in the U.S., likely?" asked Alexander.

"You know, I would not be surprised if it is. We have not detected it yet. But, when you have a virus that is showing this degree of transmissibility and you're already having travel-related cases that they've noted in Israel and Belgium and in other places – when you have a virus like this, it almost invariably is ultimately going to go, essentially, all over," he replied. 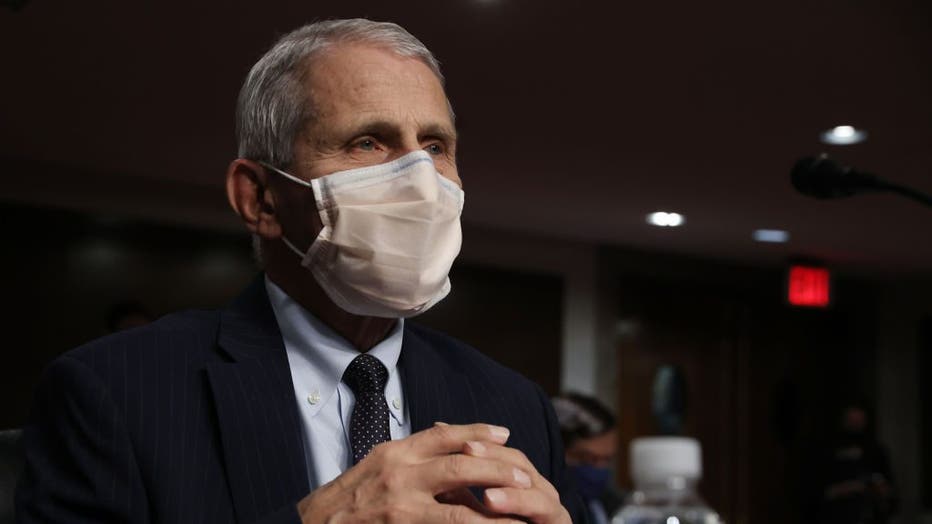 National Institute of Allergy and Infectious Diseases Director Anthony Fauci prepares to testify before the Senate Health, Education, Labor, and Pensions Committee about the ongoing response to the COVID-19 pandemic in the Dirksen Senate Office Build

"The issue of blocking travel from a given country is to just give us time to assess it better. That's the reason for doing that," Fauci added. "Not any reason to panic. But we want to give us some time to really fill in the blanks of what we don't know right now."

In a Friday interview on CNN's "New Day," Fauci previously told co-host Brianna Keilar that anything was possible when asked if it was possible the variant was in the U.S.

"Of course. Anything is possible," he said then. "We don't know that. There's no indication that it is right now. It seemed to have been restricted."

The White House moved Friday to implement travel restrictions on South Africa and seven other countries in the region, with some exemptions. The changes are set to begin on Monday.

"It seems to spread rapidly," President Biden said Friday, telling reporters that he's decided "that we’re going to be cautious."

Other nations took similar action as cases and probable cases cropped up in Britain, Germany, Belgium, Israel and Hong Kong.

Omicron variant: What to know about the new COVID-19 strain

An advisory panel of the World Health Organization classified on Nov. 27, 2021, a worrying new COVID-19 variant first detected in South Africa as a highly transmissible virus of concern, naming it "Omicron" under its Greek letter system.

The U.S. Centers for Disease Control and Prevention (CDC) said Friday night that no cases of the omicron variant have been identified in the U.S. to date and assured that the agency would "monitor its path."

The omicron variant alarmed health professionals due to its swift spread among young people in South Africa, although there was no immediate indication whether the variant causes more severe disease.

A number of pharmaceutical firms, including AstraZeneca, Moderna, Novavax and Pfizer, said they have plans in place to adapt their vaccines in light of the emergence of omicron.

Fewer than 6% of people in Africa have been fully immunized against COVID-19, and millions of health workers and vulnerable populations have yet to receive a single dose.