FOX 26 Reporter Natalie Hee spoke with the family about what happened.

HOUSTON - First their 9-year-old daughter was murdered in February and in the last two months, the family of Arlene Alvarez has become victims of two more crimes. The most recent one happened Wednesday morning.

The Alvarez family says someone stole their truck from their driveway overnight and led police on a chase.

The family believes it was the same suspect who broke into their house two months ago and stole their keys. They anticipated that he would one day return.

Wendy and Armando Alvarez are wondering when their family will catch a break. 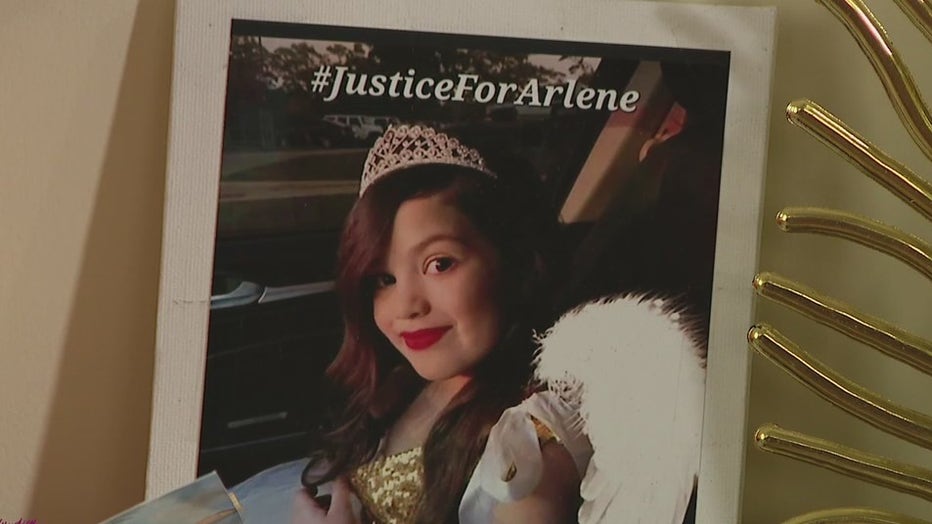 Photo of Arlene Alvarez hanging inside her family's home.

In February, their 9-year-old daughter Arlene was killed when a robbery victim mistook their car for the perpetrator and shot at them. Arlene was sitting in the backseat when she was shot and later died at the hospital.

A grand jury declined to indict the shooter in July.

The mother of 9-year-old Arlene Alvarez spoke at a press conference after the robbery victim who shot and killed her daughter was no-billed by a Harris County grand jury. "I don't agree with what happened today," said an emotional Wendy Alvarez.

In August, the family returned home from a trip to Disney World and found their house had been broken into and ransacked. The thief apparently got away with multiple firearms and money.

"I realized he took one of my keys. I kinda knew he was going to come back," Armando said.

Armando installed GPS in his truck as a safeguard.

Two months passed by and the Alvarez family thought they could maybe let their guard down again. But around 1:40 a.m. Wednesday, surveillance video captures the suspect hopping the fence into their driveway and taking off with the family’s truck.

"They’re getting us at our most vulnerable stage. And that is really messed up because this person had to have a lot of courage to break into our house again. Not one time, but twice," Wendy said.

Houston police were alerted and pursued the thief from southeast Houston to Spring, where officers eventually arrested the man around 2:20 a.m. on the 5000 block of Sweet Chestnut Lane.

"He was running on foot and hid. He ended up hiding in a retention pond where our K-9 units were able to track him," said HPD Lt. J.P. Horelica.

Armando said he works as an electrician and works out of his car. Having it stolen was like having his livelihood taken away.

"That’s how I feed my family," Armando said.

Wendy said she was frustrated at the rising crime rates in the city and pleaded with officials to do more to keep Houstonians safe.

"It was a blessing in disguise that we had the GPS, but what if he would’ve killed us then taken the truck? Then what? Then is the city going to start reacting? Then the judges are going to start taking actions? That’s not it. I’m so frustrated with everything that’s going on. I’m so mad. I’m so pissed off that these criminals get more justice than us, you know," Wendy said.

Armando says his truck was returning to him Wednesday morning. However, the family worries the suspect was not working alone.

HPD says a 25-year-old suspect was detained in connection with this case, but so far, investigators have not officially released his name as charges are still pending as of Wednesday afternoon.