HOUSTON - Thousands of people paid their respects at a public viewing for George Floyd in Houston on Monday.

The six-hour viewing began at noon, but people started to line up hours before.

MORE: What you need to know about George Floyd's public viewing in Houston

The Fountain of Praise Church hosted the viewing today for 6,362 mourners.

The Houston church, located on Hillcroft Ave., will also host a private funeral service on Tuesday. 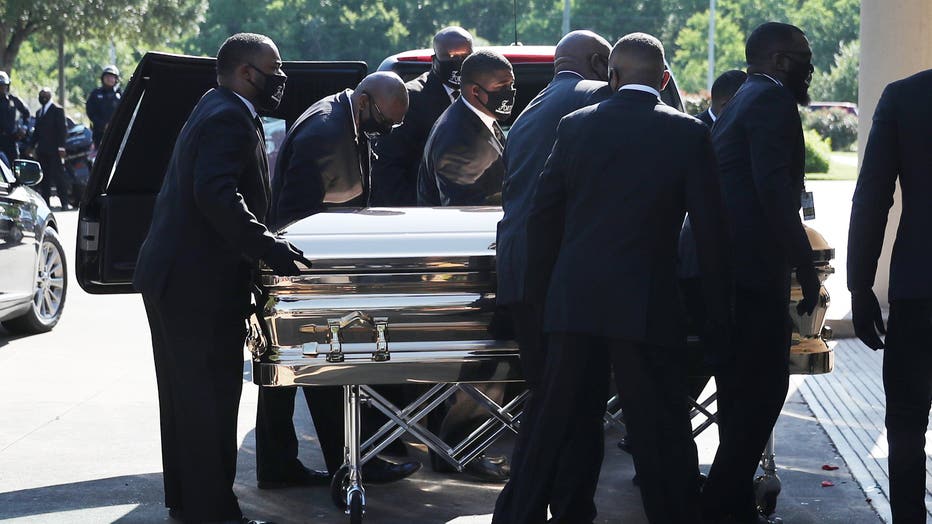 HOUSTON, TEXAS - JUNE 08: Pallbearers take the casket of George Floyd into the Fountain of Praise church for his memorial and funeral services on June 8, 2020 in Houston, Texas. (Photo by Joe Raedle/Getty Images / Getty Images)

Floyd will be buried at the Houston Memorial Gardens in Pearland.

Those attending the viewing on Monday were asked to park at two locations a few blocks away – Fountain Life Center and Kingdom Builder Center – and take a shuttle to the church.

People were required to go through a metal detector, and no one was allowed to bring in bags. In light of the COVID-19 pandemic, guests went through a temperature check, and had to wear masks.

A six-hour public viewing is held in Houston on Monday for George Floyd. A private funeral service and burial will be held on Tuesday.

Governor Greg Abbott was among those paying their respects on Monday. Outside the church, he told reporters that he will include Floyd’s family in discussions about police reform and any related legislation.

"George Floyd is going to change the arc of the future of the United States. George Floyd has not died in vain. His life will be a living legacy about the way that America and Texas responds to this tragedy," Abbott said.

He graduated in 1993 from Yates High School in Houston, where his friends remember him as a football and basketball star.

Last week, around 60,000 people gathered in downtown Houston alongside Floyd's family to take part in a historic march to honor Floyd.

Houston ISD confirms George Floyd attended Yates High School all four years and graduated in 1993 where friends remember him as a football and basketball star.

A mural has been painted in honor of Floyd in his old Third Ward neighborhood, and another was painted at the Breakfast Klub.

Floyd was also honored at a memorial service in Minneapolis on Thursday and another in North Carolina on Saturday.