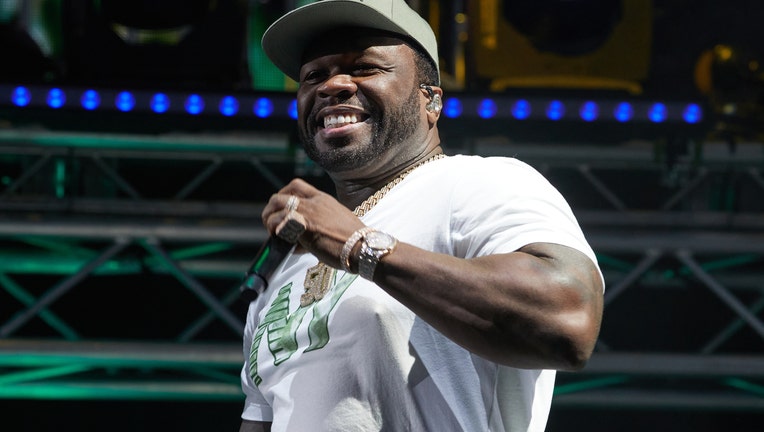 MANCHESTER, ENGLAND - JUNE 11: (EDITORIAL USE ONLY) 50 Cent performs on day 1 of Parklife Festival at Heaton Park on June 11, 2022 in Manchester, England. (Photo by Burak Cingi/Redferns)

HOUSTON - There are now 50 more reasons to be excited about the 73rd Annual H-E-B Thanksgiving Day Parade.

The City of Houston and Mayor Sylvester Turner announced Curtis "50 Cent" Jackson will be the 2022 Thanksgiving Day Parade Grand Marshal. He will lead the iconic Tom Turkey float along with Turner and honored guest, the 2021 Grand Marshal Dr. Peter Hotez.

This year’s parade is set to kick off the holiday season on Nov. 24 at 9 a.m. in downtown Houston after being canceled two years in a row.

"As we celebrate our blessings this year, let us reflect on Houston as a vibrant and welcoming global city that values diversity and inclusion. This year's Thanksgiving Day parade will highlight some of the most incredible talent, floats, and marching bands in the history of the parade," said Turner.

The event will include a performance by local rapper Bun B, who made history at the 2021 Houston Livestock Show and Rodeo with his H-Town Takeover. Theatre Under the Stars’ Mary Poppins will also perform along with the iconic Apache Belles who are celebrating their 75th anniversary and 26 years of participating in the parade.

EDITORS NOTE: This video is from a previous story. More than a dozen honorees will be recognized for their work in the Houston area including award-winning rapper, entrepreneur, actor, producer, and philanthropist, Curtis "50 Cent" Jackson. Here's what he had to say before the award ceremony.

Those who attend can also enjoy 20 high-flying balloons and 14 colorful floats, including the famous Tom Turkey and Santa Claus. The parade will feature high-stepping marching bands, drill teams, musical performances, and so much more.

50 Cent recently moved to Houston in May 2021. He is known as one of the world's best-selling rappers with more than 30 million albums sold worldwide in addition to winning three Emmy’s, a Grammy, 13 Billboard Music Awards, three American Music Awards. However, he didn't stop there because the music mogul also carved out an award-winning television and film career as both a producer and star.

Since making a home in the city, he has made his mark by fostering leadership in young people in the community by supporting the NAACP Toy Drive, Houston’s Christmas Eve Super Feast, the Houston Symphony, and the Houston Livestock Show and Rodeo.

Dr. Peter Hotez is a Professor and Dean of the National School of Tropical Medicine at Baylor and Co-Director of the Texas Children’s Hospital Center for Vaccine Development. He's an internationally recognized physician-scientist and one of the most trusted medical figures of our time and has been a reliable expert in communicating clear messaging about the ongoing pandemic.

"We are thrilled to host this wonderful tradition downtown again, and I look forward to seeing smiles on the faces of children and adults enjoying the parade made possible by our wonderful sponsors," said Turner.