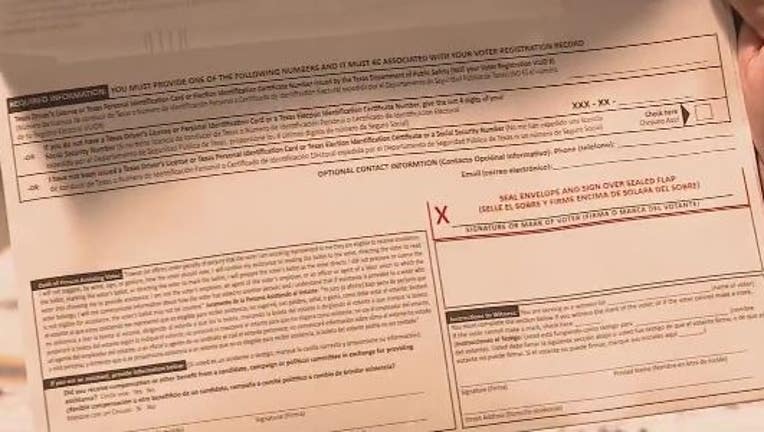 AUSTIN - Texas threw out mail votes at an abnormally high rate during the nation’s first primary of 2022, rejecting nearly 23,000 ballots outright under tougher voting rules that are part of a broad campaign by Republicans to reshape American elections, according to an analysis by The Associated Press.

Roughly 13% of mail ballots returned in the March 1 primary were discarded and uncounted across 187 counties in Texas. While historical primary comparisons are lacking, the double-digit rejection rate would be far beyond what is typical in a general election, when experts say anything above 2% is usually cause for attention.

"My first reaction is ‘yikes,’" said Charles Stewart III, director of the Election Data and Science Lab at the Massachusetts Institute of Technology. "It says to me that there’s something seriously wrong with the way that the mail ballot policy is being administered."

Republicans promised new layers of voting rules would make it "easier to vote and harder to cheat." But the final numbers recorded by AP lay bare the glaring gulf between that objective and the obstacles, frustration and tens of thousands of uncounted votes resulting from tighter restrictions and rushed implementation.

In Texas, a state former President Donald Trump easily won although by a smaller margin than 2016, the trouble of navigating new rules was felt in counties big and small, red and blue. But the rejection rate was higher in counties that lean Democratic (15.1%) than Republican (9.1%).

The unusually high rejection rate to start America’s midterm election season is expected to put more attention on changes to the ballot box elsewhere in the country. Texas’ election was the debut of more restrictive voting rules the GOP raced to put on the books across the U.S. in time for the midterm elections, a push that took particular aim at mail voting that soared in popularity during the pandemic.

At least 17 other states in the coming months will cast ballots under tougher election laws, in part driven by Trump’s baseless and persistent claims of rampant fraud in the 2020 election. The rejected ballots in Texas alone far exceeds the hundreds of even possible voter fraud cases the AP has previously identified in six battleground states that Trump disputed.

The AP counted 22,898 rejected ballots across Texas by contacting all 254 counties and obtaining final vote reconciliation reports. Some smaller counties did not provide data or respond to requests, but the 187 counties that provided full numbers to AP accounted for 85% of the 3 million people who voted in the primary.

Last week, AP reported that 27,000 ballots had been flagged in Texas for initial rejection, meaning those voters still had time to "fix" their ballot for several days after the primary and have it count. But the final figures suggest most voters did not.

The most rejections were around Houston, a Democratic stronghold, where Harris County elections officials reported that nearly 7,000 mail ballots — about 19% — were discarded. During the last midterm elections in 2018, Texas’ largest county only rejected 135 mail ballots. Harris County elections officials said they received more than 8,000 calls since January from voters seeking help, which they attributed to "confusion and frustration" over the new requirements.

In rural East Texas, Annette Young voted by mail like usual but received a surprising letter a week after the primary, informing her that the ballot never counted because it didn’t comply with a new state law requiring mail voters to include personal identification numbers.

"I just threw it right in the trash," she said.

Most of the rejected ballots, according to county election officials and the Texas secretary of state, failed to adhere to the new identification requirements. The changes were part of the sweeping overhaul to Texas’ elections that Republican Gov. Greg Abbott signed into law in October, saying at the time that "no one who is eligible to vote will be denied the opportunity to vote."

Republican state Sen. Paul Bettencourt, a proponent of the changes, said in an email that one issue might have been that ballot instructions printed in different ink colors — red for signature, black for identification numbers — might have left voters with the wrong impression they did not need to provide both.

Federal data on discarded mail ballots in general elections show few instances of double-digit rejection rates. The outliers include Indiana (14.5%) in 2006, Oregon (12.7%) in 2010 and New York (13.7%) in 2018, according to records from the U.S. Election Assistance Commission.

Stewart, of MIT, said generally less is known about trends in primary elections because of lacking data. One assumption, he said, is that because primaries tend to draw the most habitual voters, they are less likely to mistakes that cause rejections. But Stewart said others believe that officials may have more time to scrutinize, and reject, ballot paperwork in low-turnout elections.

The new mail ballot requirements in Texas include listing an identification number — either a driver’s license or a Social Security number — on the ballot’s carrier envelope. That number must match the county’s records, and if a ballot is rejected, voters are given the opportunity to supply the missing information or simply cast a ballot in person instead.

It is unknown how many Texas voters whose mail ballots were rejected may have still had their vote count by deciding to just show up in person instead.

Sam Taylor, a spokesman for the Texas secretary of state, said the office did not yet have its own final comprehensive numbers on ballot rejections. He said a "significant portion" of their efforts this year will be awareness about the new mail-in rules.

"We are confident we will have all the information we need to apply any lessons learned during the primary to an even more robust voter education campaign heading into the November general election," he said.

Delores Tarver Smith, 87, took no chances with a mail ballot this year. She applied in Harris County for a mail ballot Feb. 1, but when none arrived by election day, she went and voted in person.

Last Wednesday — more than a week after the primary — her absentee ballot finally showed up at her home.

"I just went in person to vote, because I had to make sure my vote counted," she said.